Authentically Black and Truly Catholic:
The Rise of Black Catholicism in the Great Migration 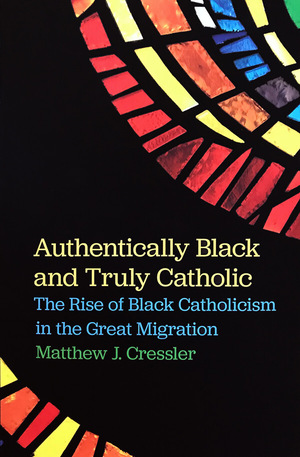 There are 3 million African-American Catholics in the United States. Yet in my American Catholicism course last year, the vast majority of students—many of whom grew up Catholic—were shocked to learn of black Catholics’ existence. Why? And why, despite the efforts of historians like the late Cyprian Davis, do scholars of both Catholicism and African American religion know so little about why black Americans became Catholic in the first place, or about their religious worlds?

Matthew J. Cressler’s groundbreaking Authentically Black and Truly Catholic: The Rise of Black Catholicism in the Great Migration (NYU Press, 2017) sets out not only to explore the world of black Catholic Chicago, but also to participate in a larger efforts to rethink the stories we tell about American religion. Scholars like Judith Weisenfeld, Curtis Evans, and Sylvester Johnson have challenged understandings of a particular kind of African American religious belonging and practice—that of the “Black Church,” combining charismatic evangelical worship with concerted political effort in favor of civil rights—as normative, even natural. If this way of thinking about African American religion puts black Catholics in a “blind spot,” so does the tendency in Catholic studies to narrate “American Catholicism” as primarily a story of immigrants (whether European, Latino, or Asian) and their descendants.

In response to these two narratives and their presuppositions about religious stability, Authentically Black and Truly Catholic is fundamentally about conversion, understood as the realignment of the true self with a way of life, the personal and political stakes of this transformation, and the varied hopes, fears, and tactics of potential and actual converts and their evangelizers. These themes are strikingly similar in the first and second halves of the book, which investigate two periods of black Catholic life that at first seem wildly disparate: the formal, circumscribed, parish-based community of the 1920s–50s, and the revolutionary movement of the 1960s–70s which saw Catholics align with Black Power to create Afrocentric liturgies and challenge the Church’s wider power structures.

Through the lens of 20th-century black Catholics’ experience, Cressler raises broader questions about the meanings of religious belonging. His work should also, then, be situated against Jay Dolan’s and Robert Orsi’s observations about priests’ efforts to reform the religious lives of Catholic immigrants, as well as the rich new literature on Native Americans and Christianity represented by scholars like Emma Anderson and Rachel Wheeler. Cressler together with these scholars brings forward the sometimes joyous, often painful development of new identities and new ways of being that emerge in response to new situations.

As Cressler notes, many Catholics of African descent lived in the United States prior to the mid-20th century; slavers imported Catholics from Kongo, while other slaves converted to their owners’ religion. But conversions during the Great Migration expanded the African American Catholic community in both number and geographic diversity. Unlike much scholarship focused on “Catholics and race” in the north, Authentically Black and Truly Catholic emphasizes the lives and thoughts of these black Catholics, rather than white Catholics’ reaction to and interaction with African Americans. Several of Cressler’s key players are, however, white Catholics: neither openly hostile racists, nor the tiny elite minority of “interracialists” who have commanded substantial scholarly attention, but the missionaries whose efforts swelled black Catholics’ ranks.

When black migrants arrived in northern cities in the middle of the 20th century, many of them were only able to find housing in neighborhoods long inhabited by European Catholic immigrants and their descendants. These Catholics’ often violent hostility to the newcomers, as described in John McGreevy’s classic Parish Boundaries: The Catholic Encounter With Race in the Twentieth-Century Urban North, was a contributing factor to white Catholics’ increasing suburbanization. Chicago’s migrants thus arrived to a growing “Black Belt” containing six vast Catholic churches, each of which was soon in crisis; “pastors preached to empty pews and parish buildings fell into disrepair” due to equally empty collection baskets (27). In this context, a few Catholic priests decided that the only way to stem decline was to recruit the neighborhood’s new residents.

In their new venture, these priests and their sister-collaborators participated in a nationwide enthusiasm for conversion. Catholics directed “home missions” at the lukewarm and lapsed, while “foreign missions” sought to convert “heathens” of every stripe, whether in China or on the South Side. Cressler ably examines the slippery nature of this terminology, which, while technically not overtly racialized, nevertheless subtly organized treatment of African Americans by prelates like Chicago’s Cardinal Mundelein, not to mention by white missionaries themselves.

These men and women deeply believed that conversion to the one true Church was the only way to save souls, as well as their parish finances. Father Joseph Eckert, S.V.D., pastor of St. Monica Parish, elaborated an influential six-point method that included door-to-door canvassing, advertising, and making use of ecumenical occasions like weddings and funerals to preach to unconverted attendees. The most successful missionary method, however, involved the education of non-Catholic children in parish schools. Attending these schools meant mandatory religious instruction and Mass attendance, not only for students but also for their parents. While it did not mean mandatory conversion, one frequently led to the other.

Cressler’s second chapter, on the process of education, broadly conceived, is his most elegant and provocative. If it’s a truism that many African Americans became Catholic as a result of a parochial school education, what does that mean? Cressler observes that against common Protestant assumptions that “conversion” entailed a personal salvific encounter with God and a free decision, Catholic missionaries located it in “submission to external authority,” or what many converts themselves succinctly described as “faith in the true Church” (51).

What, then, are the conditions under which “faith” becomes possible? Cressler identifies these in missionaries’ rigorous educational program, which included not only religious instruction but regular ritual participation. Learning prayers, encountering concepts, and training their bodies in “Catholic” postures and gestures (genuflecting, the sign of the cross, walking with folded hands), converts did not so much “choose” to become Catholic as they “became someone new as they learned (and were taught) to feel, imagine, and experience the world in new ways” (61). While this process sometimes pushed relationships with nascent Catholics’ communities and families to the breaking point, it also in many cases made formal conversion seem the only possible result.

White Catholic missionaries, it should be said, were not the only people in Chicago interested in training African American bodies away from the shouting, swaying worship style of Holiness-Pentecostalism. As Cressler describes, a significant minority of black Chicagoans shared a penchant for “quietness,” stillness, and formality in worship and dress. While many became Catholic and participated in devotions like the tableau “Living Stations of the Cross” detailed in Cressler’s third chapter, others found their way to similarly strict new religious ventures like the Nation of Islam, which, unlike Catholicism, presented itself to potential black converts not as a universal religion that “knew no race,” but as a place where black pride co-existed with a trenchant critique of American Christianity’s white power structures.

The second half of Authentically Black and Truly Catholic begins with a voyage no less fraught than that of blacks who boarded trains headed north in the inter-war years. Having heard the news of Martin Luther King, Jr.’s assassination, the African American Catholic priest George Clements walked from his rectory’s living room to its bathroom and looked deep into his own eyes in the mirror. “From now on,” he said to himself, “I’m gonna be a Black man” (116).

While white missionaries often had warm relationships with the black converts they pastored and taught, the “asymmetry of power between the converters and the converted” was always clear, and required black Catholics, including Chicago’s few African American priests, to accept limits on control of their local churches as well as prescribed ritual practices (22). It’s telling that the height of Clements’ ambitions, pre-1968, was “auxiliary bishop” (116). As black Catholics encountered the nascent Black Power movement at the same moment as they received the Second Vatican Council, Cressler argues, they experienced a second conversion, transforming their religious practice along with their ecclesiastical politics and giving today’s black Catholics a distinctive aesthetic and theological cast.

The second half of Authentically Black and Truly Catholic, like the first, revolves around the breaking and making of relationships, always as the context for the discovery of new selves.  Simultaneously inspired by the politics of Black Power and by aggiornamento, black Catholics—at first a relatively small group—found themselves fighting on two fronts, against the archdiocesan power structure and against their black coreligionists who valued Catholicism’s “universal” liturgy and who liked the introduction of drums, African dancing, and gospel music into the mass as little as did Cardinal Cody. Activists demanded not just a place at the archdiocesan table, but “a distinctively Black Catholicism” (117). In identifying themselves as black first, they also discovered new allies among Chicago’s Black Panthers, as described in the fourth chapter’s fascinating discussion of a bitter fight for self-determination (i.e., control of black parishes) in the late 1960s.

The book’s final chapter ventures further into recent history than most books dealing with Vatican II’s immediate aftermath, providing a valuable case study of how lay and clerical activists both established themselves within the American Catholic Church’s structures and also faced ongoing struggles following a highly emotional historical moment. Cressler discusses organizational successes including the establishment of the National Office of Black Catholics, along with coordinating groups for black priests and sisters. In the tradition of Black Power, these new institutions critiqued what they identified as the Catholic Church’s colonial practices against African American culture.

In response, the Black Catholic Movement developed its own program of evangelization, teaching a “relevant” version of black Catholicism, one which “drew heavily on the Black cultural nationalist and pan-Africanist traditions prevailing in the Black Power era” (173). In that respect, Cressler notes, the movement had much in common with similar programs in black Protestant denominations. It was a “creative achievement” at a high level, producing music, art, liturgy, and theology widely embraced within the black Catholic community and beyond. Yet it also found some black Catholics mourning for the loss of a pre-Vatican II, pre-Black Power way of being black and Catholic. And ironically, some of the most successful black Catholic parishes of the 1970s and 1980s used techniques like mandatory religious education and focused on “masculinity, patriarchy, and the place of the family,” just as white missionaries had done (185).

If this ending seems a bit sad and ambiguous, my judgment is that this tone is appropriate for the story Cressler has to tell. The “lived history of Vatican II” (another genre to which Cressler’s work contributes) is by its nature messy, contingent, and full of people working hard to achieve goals that have unintended effects. So is the lived history of any group of Americans. And conversion, a joyous achievement, always contains some sadness at what is lost in the process of growing closer to the divine, a feeling as common for readers of history as it is for religious actors. If, for example, you did not already believe that Catholicism, “as with all things in America,” is “ineluctably entangled with race” (200), then you may finish this book mourning a little—but also closer to the truth than you were before.

Catherine R. Osborne is a historian of American Catholicism. Her new book is American Catholics and the Church of Tomorrow: Building Churches for the Future, 1925–1975 (University of Chicago Press, 2018).

This book review appears in the fall 2018 issue of the American Catholic Studies Newsletter.