The Many Captivities of Esther Wheelwright 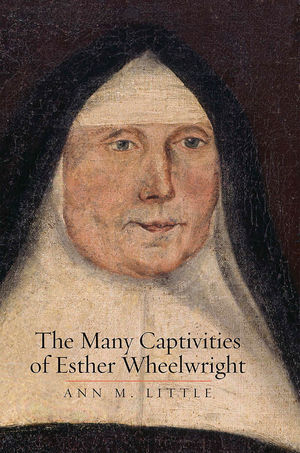 While most retellings of Esther Wheelwright's story have been decidedly hagiographical, Ann Little's biography of the Québec Ursuline nun offers a refreshing interpretation of her life and times. Conventional modern biographies (usually of male subjects), not unlike hagiographies, typically focus on one character and his or her achievements, but Little contends that Wheelwright is “especially unknowable if we try to see her as a modern biographical subject, as an individual extracted from the communities of girls and women who surrounded her throughout her life.” The Puritan-born Esther was taken captive in Maine by Wabanaki Indians, lived among them for five years, and finally spent most of her life in the Ursuline convent of Québec, first as a student and then as a nun. Mother Marie de l’Enfant Jesus, as Wheelwright came to be known in the convent, to this day remains the only foreign-born superior of the convent. Through painstaking research and an innovative use of material and visual culture, Little masterfully recovers Wheelwright’s life prior to her encounter with the Ursulines, showing how a girl who had been taught that Catholics are the Antichrist eventually became a nun.

Given the paucity of extant material on Esther Wheelwright, writing her biography proves challenging. Little skillfully uses material culture and secondary literature to examine each of Wheelwright’s contexts of Puritan women in an agrarian community, Wabanaki women in a Catholic mission, and nuns in an Ursuline convent. Following Esther in each setting, Little concludes that there were more continuities in the lives of women from New England, New France, and Wabanakia than is usually acknowledged.  All these groups had similarly gendered ideologies. Born in 1696 in Wells, Maine, Esther grew up in a prominent, local family. Labor was gendered. While men toiled outside of the Wheelwright home, Mrs. Wheelwright, female slaves and servants, and the young Wheelwright daughters worked in the kitchen garden and indoors, cooking, cleaning, mending, and nursing. Mrs. Wheelwright gave birth to eleven children, nine of whom lived to adulthood. Taking care of such a large household and the visitors who stayed at the house—which was also a tavern—made these women’s workload heavy and crucial. While life among the Wabanaki significantly differed from that in Wells, Little shows that the gendered division of labor and women’s responsibility for hospitality and cooking would have been familiar to Esther. As in Maine, Esther was surrounded by women. Using the Jesuit Relations to explore Wabanaki Catholicism, Little believes that Wabanaki women, not the Jesuits, introduced Esther to Catholicism and played the most important role in her conversion. Similarly, education at the Québec Ursuline convent was gendered. While the girls’ elite status entitled them to learn how to write, and not just to read, learning Latin and Greek was reserved to male students.

One striking resemblance between Catholic Wabanaki women and the Québec Ursulines was their devotional and liturgical object making. Wabanaki women spent hours creating elaborate items, such as belts wrought with wampum to decorate the mission church. In Québec, several visitors noted the quality of the ornaments that the Ursulines themselves made for the convent chapel. Mother Esther herself was renowned for her skills, which she may have gained during her years among the Wabanaki. While Little’s emphasis on ornament making in both communities is fascinating, one might have liked a deeper examination of its spiritual function.

But Little also finds major differences among these various communities of women. Her emphasis on aging as a source of empowerment for women religious is one of the book’s most original contributions. While postmenopausal Puritan women saw a decrease in their status, Catholic women religious, especially choir sisters (teaching sisters who, unlike lay sisters, took perpetual vows) gained in status over the years. Esther exemplifies this trend. At age 18, Sister Marie Joseph de l’Enfant Jesus took her vows and after a dozen years or so gained the title of Mother. She rose in prominence starting at age 39 (around the age when a married woman’s status declined) when she was elected to leadership positions. At age 64, she became Superior for the first time. Between then and her death at age 84, she occupied the most powerful positions within the convent.  Therefore, documents on the later years of her life are more extensive than those of her early years in the community.

Little’s attention to geopolitical context helps us understand the singular trajectory of Esther’s life. Imperial warfare profoundly shaped her life and that of those who fought to control the Northeastern borderlands. In 1703, Esther was taken captive as part of a Wabanaki raid on Wells during Queen Anne’s War. Little speculates that Esther’s age and sex probably led to her adoption within a Wabanaki family. At age seven, she was old enough to be useful to the community, young enough to learn another language, and the Wabanaki were interested in incorporating women into their community in the face of their demographic decline. Cautiously noting that the circumstances of her arrival in Québec are unknown, Little thinks that the French might have brought her there for an exchange of captive children between New England and Canada. But Esther, having converted to Catholicism and likely having forgotten English, refused to return to her family. Though the Ursulines were eager to erase her Wabanaki past, they viewed her as the Anglaise. Becoming an Ursuline brought some stability to Esther’s life, but the siege of Quebec and the British conquest of Canada during the French and Indian Wars caused anxiety for the Catholic population and the Ursulines. The nuns nonetheless continued to run their schools because the British acknowledged their social usefulness and feared a local Catholic insurrection.

Little is at her best in her analysis of Esther’s bodily experience of border-crossings. In Maine, Esther would have worn a constraining stay to develop good posture and mark her social status. Her adoption into a Wabanaki family probably involved substituting Native garments for English clothing. She would also have learned how to move, sit, and sing like a Wabanaki. In Québec, Esther once again would be dressed and taught how to behave like a European. Finally, Little rightly notes that Esther’s clothing ceremony (at the time she became a novice) “was the first time that she was stripping and redressing herself entirely voluntarily” (117). Diet and health also were implicated in border-crossings. Little contrasts Esther’s hunger and the fact that she would have been surrounded by sick and dying people among the Wabanaki with abundance and women’s fertility in Wells and Québec. Esther’s share of suffering as a child might explain why as a nun she was not renowned for her mortifications. Though probably unintended, repeated mentions of this contrast reinforce the idea of Wabanaki declension at the expense of their resilience.

While foregrounding women’s communities is a major strength of the book, Little sometimes downplays the relationships between men and women. Men are present in the book as those who helped Esther move from one place to another. Little also skillfully reads against the grain, showing that despite the Ursulines’ emphasis on the cloister, the convent walls were in fact permeable and several men entered them. During the British occupation of Québec, British Protestant soldiers lived in the convent, though the Annals of the community remained silent about their presence.  But Little stays silent on Wabanaki gender relations. She notes that several Wabanaki women, encouraged by the Jesuits, wanted to remain virgins. If this is true, one would hope to learn more about the reaction of Wabanaki men. Since their population decreased in the early 18th century, women’s refusal to perform their sexual duties would have caused tensions between Wabanaki men and women and between Jesuits and Wabanaki men. It is also possible that Wabanaki women’s enthusiasm for celibacy was motivated in the first place by a change of their status and increasing pressure on their reproductive capacity in the context of profound upheavals in the Wabanaki community.

Little tells the story of an incident with the Bishop of Québec when Esther was Mother Superior and concludes that, while displaying obedience in her correspondence, she in fact acted according to “the tradition of independence among New World Ursulines.” This conclusion is in line with the author’s emphasis on the Ursulines as powerful women. Professed nuns certainly occupied leadership positions unavailable to married women, but a deeper analysis of the relationships between the Ursulines and male clergy would be needed before reaching such a conclusion. Recent scholarship on women religious revises the faux-feminist interpretation that sees nuns as the precursors of modern-day feminists by complicating the notion of authority, reflecting on the significance of the vow of obedience, and showing that nuns subscribed to patriarchy more than they tried to overthrow it.

These are minor quibbles, though. This review cannot do justice to the level of detail and nuance that Little brings in her examination of the lives of Esther and the various women who surrounded her. Among the book’s numerous achievements is Little’s ability to demonstrate that we should take nuns seriously. To adapt Ann Braude’s famous statement, The Many Captivities of Esther Wheelwright shows that the history of women religious is North American history.

Gabrielle Guillerm is a doctoral candidate at Northwestern University who specializes in North American religious history. Her dissertation explores French Catholic influences in the early United States, including the impact of French nuns on Western life and religion.

This book review appears in the history of women religious section of the fall 2018 issue of the American Catholic Studies Newsletter.