The October 28 special issue of America, the Jesuit weekly magazine, highlights women in the life of the church. The principal contributors to this issue, all women, examine topics such as ministry, spirituality, social justice, and work-life balance. Cushwa Center director Kathleen Sprows Cummings contributed the essay “A Promising Path,” which considers Pope Francis’ call for building a “profound theology of womanhood” and how that call may be addressed. 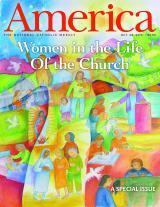 In the editors’ note, “Of Many Things,” managing editor Kerry Weber writes that “these articles provide a glimpse into the ways in which the experience of women within our church and our world continues to evolve.”

Elements of that evolution may have sped up during the last few months, as evidenced by Cummings’ own experience. When the editors initially invited her to contribute to the special issue last July, she declined, citing a number of looming deadlines. But there were unstated reasons behind her refusal as well. “In general I’m hesitant to publish pieces I have written from the perspective as a woman of faith, preferring instead to focus on subjects within my professional expertise,” Cummings said. “Moreover, I was pretty convinced that the conversation on women and the church was at an impasse, and that there was little to be gained from contributing to it except criticism.”

And then came Pope Francis’ interview on the Rio-to-Rome flight. The editors approached her again, asking whether she would reconsider and write a “first response” to the pope’s call for a “profound theology of womanhood.”

“For the first time in a long while, I thought that maybe there was space for a broader conversation about the future of women and the church,” Cummings said. “I welcomed the opportunity to ruminate on what it might look like for me. As I explain in the essay, I wrote not only as a historian but also as a mother and a feminist.” While she doesn’t anticipate that negative criticism will completely disappear, that’s not her main concern. “When the pope says its time to think about a deeper theology of womanhood, I assume he means it. I am grateful that America, with this special issue, has taken the step of initiating this conversation—making, as they say in the editorial, ‘a meaningful investment in the long haul.’ I’m also grateful that they invited me to join them in this project.”

The publication’s editors explain the rationale behind this special issue in the editorial “Conscience of America.” “While America identifies itself as a journal of opinion for all Catholics, even today Catholic women are underrepresented in our pages,” they write. “It is not surprising, and perhaps unavoidable, that as a Jesuit journal, most of our editors are men. But it is also the case that most of our non-Jesuit contributors are men, and that achieving a greater balance in our pages is both a worthy and challenging endeavor.”

That the challenge extends throughout the field of journalism as a whole, and the editorial cites a June study by Media Matters for America that found that only 38 percent of newsroom staffers in the United States are women. “America cannot be satisfied with simply approaching parity with the larger culture. We are called to be a prophetic witness for the full participation of women in the church and society.”

Cushwa Center in the media