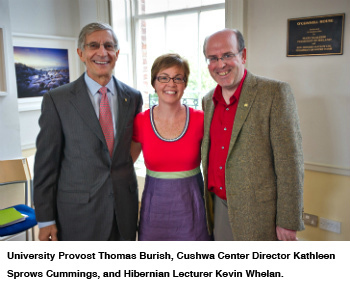 The Emerald Isle Classic that drew thousands of Notre Dame fans to Dublin also set the stage for the 2012 Hibernian Lecture, an annual event that showcases a leading scholar of Irish or Irish-American history. This was the first time that the lecture, sponsored by Notre Dame’s Cushwa Center for the Study of American Catholicism and funded by the Ancient Order of Hibernians, was held in Ireland. One of the country’s best known and widely published scholars, Kevin Whelan, delighted the audience at O’Connell House with his account the historic and ongoing connections between Notre Dame and Ireland.

Whelan knows the topic personally: In 1998 he was named the inaugural Michael Smurfit Director of the Keough-Naughton Notre Dame Centre, and from 1999 to 2011 he directed the annual Irish Seminar, the leading seminar in the field of Irish Studies. He also counts Brother Aidan O’Reilly CSC (1877-1948), among his great uncles. Whelan has written or edited 16 books and more than 100 articles on Ireland’s history, geography, and culture. Most recently, Whelan edited Notre Dame and Ireland, a full-color book that highlights the University’s Dublin Program, the Irish Studies program, and the ties between the country and the University.

“I am so proud that Notre Dame can claim our 2012 Hibernian Lecturer as one of our own,” said Kathleen Sprows Cummings, director of the Cushwa Center, in her introduction of Whelan.

Whelan helped clarify how an American institution with a French name founded by a French priest came to be known as the Fighting Irish. During the U.S. Civil War, Whelan reports, Irish immigrants were enthusiastic soldiers, and 38 Union regiments had the word “Irish” in their names. “The most famous of these regiments was New York’s “Fighting 69th’—the original ‘Fighting Irish’—which lost 196 of its 317 men at Antietam,” Whelan writes in Notre Dame and Ireland. Three ND priests, William Corby, James Dillon, and Paul Gillen, served as chaplains to this brigade.

“The Notre Dame chaplains’ association with the Irish Brigade, especially Father Corby’s iconic role in some of the most important battles, created an indelible link between ND and the ‘Fighting Irish,’” Whelan writes. He also points to the way the moniker served as a positive reversal of a negative, anti-Catholic stereotype prevalent in the 19th and early 20th centuries. “As current president Father John Jenkins CSC notes, the ‘Fighting Irish’ nickname began as a slur by opponents ‘but the university embraced that name and transformed it to represent the real resilience of the Irish.’”

Whelan spoke of other connections, including how 15 of ND’s 17 presidents have been of Irish descent, and that a steady stream of notable Irish people have visited campus, including poets William Butler Yeats and Seamus Heaney, musical groups U2 and the Chieftains, and presidents Mary Robinson and Mary McAleese. “The continuing esteem in which Notre Dame is held in Ireland is attested by the granting of honorary Irish citizenship to two leading figures in the modern history of the university: Don Keough in 2007 and Father Ted Hesburgh CSC in 2012,” Whelan writes.

And the continuing esteem in which Ireland is held at Notre Dame is attested by scheduling the Hibernian Lecture, traditionally held on the eve of a home football game, at the University’s O’Connell House in Dublin.