Charlotte Hansen, PhD, is a Cushwa Fellow for six weeks this spring. Hansen, an administrator and researcher at the George Bell Institute at the University of Chichester in Sussex (UK), is also an affiliated lecturer with the university’s Department of History. She is one of the Cushwa Center’s research travel grant recipients for 2013. We caught up with her as she neared the end of her fellowship. 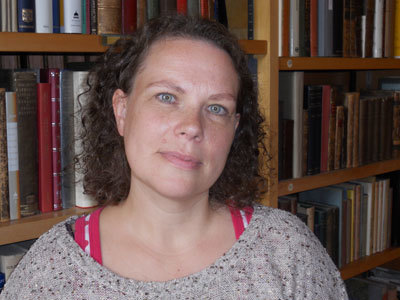 Tell us about your current research focus. What are you working on while you are at Cushwa?

I’m an ecclesiastical historian and currently working on a project that portrays the connections between a number of European and American Catholics in the 19th and early 20th centuries. Representing the American side of the project are Isaac Hecker and Orestes A. Brownson. The world is not exactly calling out for yet another general portrait of Brownson as numerous pages have already been dedicated to his oeuvre, but so far the emphasis on his connections with such prominent European Catholics as Cardinal Newman and the German church historian Ignaz von Döllinger has been lacking.

My time here has been divided between gathering primary source material relating to Brownson in the University Archives and then familiarising myself with the development of American Catholicism in the 19th and 20th century.  Having previously focused on European Catholicism I’ve found my foray into American Catholicism absolutely fascinating. Although I still have a lot to learn I find I’ve made a good beginning during my time here at Cushwa.

Have you found any surprises in the University Archives?

While I already knew that Brownson corresponded with a number of European contemporaries it’s been great to discover just how much material there is, attesting to his interest in contemporary European affairs. This ranges from musings on Bismarck and the Church to modern French literature and the Hungarian Rebellion. And I’m always pathetically grateful when I open that first box in the Archives and see that my protagonist’s handwriting is legible!

What's been the most beneficial part of your time at the Cushwa Center?

Overall I’ve found the atmosphere both at Cushwa and Notre Dame very positive and welcoming—and the resources, ranging from the workspace at Cushwa to the facilities at the Library and Archives, are absolutely brilliant.

Cushwa’s focus on American Catholicism has been just the right environment for me in which to pursue my study of European-American relations. Speaking as a European historian, I would welcome a stronger collaboration between European and American scholars as it would benefit the quality and breath of the research already being undertaken. This may be a banal observation, but a European historian working on American (Catholic) history within a European setting or the other way around approaches the subject differently as he/she is not inherently part of that particular historical setting. Some of the best research on German Catholicism in the 19th and 20th century has, in my opinion, been produced by American historians working in the United States. I am convinced that Cushwa would be an ideal component in fostering European-American networks due to its position within Notre Dame and on the American scene in general.

When you’re not at the Library, the Archives, or Cushwa, how have you spent your time here?

Being a film buff who would like nothing more than to spend all of my time in the cinema or one day write the great epos on “priests on film,” I’ve been impressed with the Browning Cinema at Notre Dame’s DeBartolo Performing Arts Center. Its repertoire rivals any good European art house cinema. And the campus is a good place to enjoy the much-neglected art form of simply getting lost…