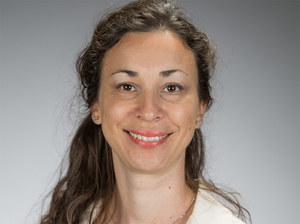 Valentina Ciciliot joined the Cushwa Center in fall 2016 from Venice, Italy, as the recipient of a Marie Skłodowska-Curie Fellowship from the European Commission. The fellowship supports a two-year visit to Notre Dame for her research project on the North American origins of the Catholic charismatic movement as well as its global influence.

Ciciliot specializes in the history of contemporary Christianity. She holds her Ph.D. in history from the University of Reading, United Kingdom, and a joint master’s in religious studies from the University of Padua and Ca’ Foscari University of Venice. We recently sat down to discuss her research project, her time at Notre Dame, and what’s next after she leaves South Bend this summer.

For those who may not be familiar, what is a Marie Curie Fellowship?

Individual Marie Skłodowska-Curie Fellowships support the work of experienced researchers (in possession of a doctoral degree or with at least four years of research experience) through European or Global Fellowships. I have been awarded a Global Fellowship (GF), which gives a researcher the the opportunity to conduct an international research project at a host institution located in a country outside Europe. The GF includes a mandatory “return” phase based in Europe. The duration of time spent abroad can be between 12 and 24 months. I chose to visit the University of Notre Dame for two years. The return phase at my host institution, Ca’ Foscari University of Venice, Italy, lasts 12 months. During the whole duration of the fellowship the researcher is employed by her European host institution.


What project have you been working on these past two years, and how did you decide on your research subject? 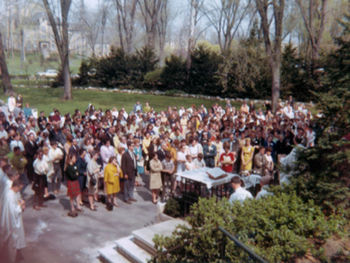 When I decided to apply for a fellowship, I knew that a completely new topic would strengthen the project proposal. My prior research had mainly dealt with saints, canonizations, and devotions (in March 2018, Viella will publish my first book on those topics, Donne sugli altari. Le canonizzazioni femminili di Giovanni Paolo II). I was searching for something new when I happened to speak to a Ph.D. colleague who had joined a Catholic charismatic group near Milan, Italy. I had not heard about Catholic charismatics until then, and as I started to research the movement, I quickly realized that there was a lack of academic historical work on this subject. This led me to consider proposing a project on the origins of the Catholic Charismatic Renewal (CCR) in North America. Consequently I chose the University of Notre Dame, one of the leading centers for the movement in the late 1960s and 1970s, as my non-European host institution.

Over the past year and a half since arriving at Notre Dame, I have mainly focused on analyzing the origins of the CCR in the United States as a starting point for understanding the relationship between North American Catholicism and European Catholicism through the movement’s history. I have also developed a detailed literature review to better historicize the movement within U.S. Catholicism of the 1960s–1980s, and have studied the historical dynamics of its development and institutionalization. I have also analyzed the reactions of church hierarchy to the CCR, especially that of the American bishops and the Vatican (some members of the Roman Curia, Pope Paul VI, and eventually Pope John Paul II, but also Cardinal Léon-Joseph Suenens, who became the patron of the movement in late 1970s). Finally, I have investigated the role of women within the movement, particularly through the literature published by Catholic charismatic leaders.

What has been the best part about being able to do this work at Notre Dame? 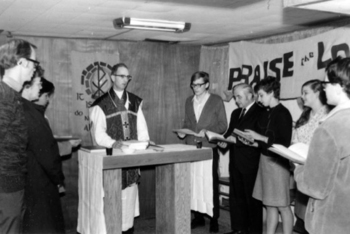 The archival research has been immensely fruitful. At the Notre Dame Archives, eight collections are completely dedicated to the Catholic charismatic movement. The archives have provided interesting material to survey the very origins of the CCR and its first efforts of institutionalizing itself (i.e., conferences at Notre Dame, the establishment of a communication center, a service committee, and later an international office, and the True House and People of Praise communities founded in South Bend, Indiana). Furthermore, the committed environment here at Notre Dame has given me the possibility of discussing, reshaping, and enriching my research.

What are the next steps in your fellowship after you leave Notre Dame this summer?

I will conduct the third year of my project at Ca’ Foscari University of Venice, my home institution. I will continue to collect material, especially in Rome and, if I am lucky, in Brussels, where apparently cardinal Suenens’ papers are. Ultimately, I will present my research at a conference in June 2019, through a course I will teach on American Catholicism after Vatican II, and as a published book.

How has life been in South Bend, Indiana?

Can we move to the next question?! Joking aside: although South Bend is not Venice, I settled down here with my family pretty well. It is a livable, family-friendly city, with beautiful parks and public libraries. The winter can be very harsh, but on the other hand the fall here is gorgeous with the celebration of yellow, red, and brown of the trees’ leaves. To be honest, the only thing that I really miss is Italy’s inimitable food!

Images are courtesy of Valentina Ciciliot, from the private papers of Father Edward O'Connor, C.S.C.