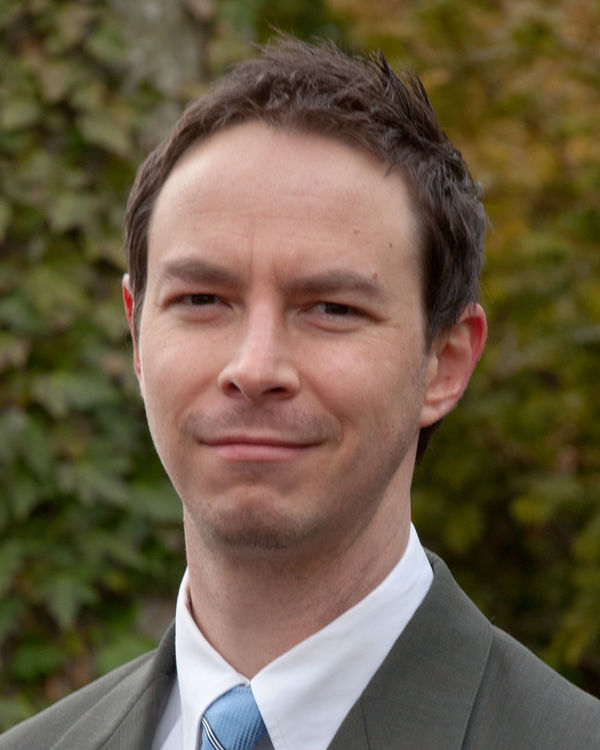 Jeff Appelhans is a PhD candidate at the University of Delaware, where he is working on his dissertation, “Catholic Persuasion: Power and Prestige in Early American Civil Life.” He made a research trip to Notre Dame last summer after receiving a reserch travel grant in 2014 from the Cushwa Center.

Tell us about your project.

My dissertation illuminates the role of Catholics in the public sphere and civil society from 1774 to 1844. I analyze how regional and national movements inflected Catholics’ social and cultural influence in Boston, New York, Philadelphia, Baltimore, Charleston, and New Orleans.

I aim to recover the political and cultural power of Catholics, some of which was formal—Catholics entered a variety of political posts—but much of which was the informal, everyday influence of folks simply participating in civil life: printers and newspaper editors to merchants and traders, schoolmasters and ladies’ benevolent organizations to priests and nuns.

By mingling in the pews, pubs, associations, shops, and streets of the early republic, Catholics and non-Catholics began to reevaluate their understandings of each other. Acquaintanceships often evolved into friendships, business partnerships, cross-denominational marriages, and even sometimes produced religious conversions. Catholics expanded this sphere of influence through personal correspondence and the burgeoning print culture, inserting themselves into local and national conversations on moral life and political action. They built up the institutional structures that legitimated their presence in the cities: churches, orphanages, schools, hospitals, and associations. These interventions snatched the palm of victory from Evangelical Protestants who aspired to the conversion of immigrant Catholics and total victory in the public sphere and civil society. Substantial edifices of politics, persuasion, counterpersuasion, and brick—something close to the very making of American Catholicism—thus normalized and secured substantive Catholic participation in civil life, just as they became the stuff of nativists’ nightmares. The ironies of success lie at the heart of this history.

What collections did you examine at the Notre Dame Archives?

I benefitted most from Notre Dame’s holdings of calendared letters from various archdioceses. Long ago, Notre Dame archivists read the tens of thousands of letters held by the archives and typed detailed notecards of each; now digitized, it is a text-searchable body of manuscript sources. I consulted records from the Archdioceses of New Orleans, Cincinnati, Bardstown, Charleston, Baltimore, Philadelphia, New York, and Boston. I also benefitted from non-calendared archives and the extensive collection of reference books in the reading room, namely the almost-complete set of Catholic Directories the archives hold.

What types of documents have been most helpful/relevant to your research?

Early Americans who lived in the same city tended to visit in person to avoid the expense, delay, and unreliability of the postal system. The interchange between people in different cities thus became a crucial source for me during my research at Notre Dame, because I got a sense of actors’ feelings and concerns about local and national developments through their writing their friends in other cities.

In other archives, newspapers, pamphlets, and books—some less overtly Catholic than tinged—demonstrate that Catholics were participating in cultural fields of persuasion.

Is there a general view of Catholics' persuasive power in this time? Does your research suggest that that's an accurate view?

I think most people would assume Catholics had little to no power. There are a few causes for that. I suspect that Catholics rarely cross the minds of many early Americanists when they think about political and cultural power. The twin ideological engines that drove the era were evangelicalism and republicanism, and they have driven the history, too. Between the Revolution and about 1820, Catholics were enough of a minority that most Protestants rarely gave them a second thought. But the fall of Napoleon and the restoration of the papacy, coupled to the rapid influx in Catholic immigrants, brought to the fore questions about the place of Catholicism in American life. Evangelicals worried by the visible growth of the Catholic Church united with native-born Americans who fretted about their place in the developing wage labor system to create a potent brew: a mix of fears about class, ethnicity, religion, and politics that became the intoxicating draught of nativism.

In many ways, then, anti-Catholicism, which was not exclusively about religious adherence, came to explain that Catholics were universally loathed, marginalized, and thus powerless. And there are certainly episodic examples of fear and violence. But before the Irish Famine (1845–49), which dramatically changed the face and place of American Catholicism, Catholics substantively participated in and influenced American public life.

Can you give a few examples?

Sure. As early as 1773, Charles Carroll of Carrollton, likely the wealthiest man in America, entered a political debate in the newspaper in which personal attacks on his Catholicism became his opponent’s last-grasp attempt to unravel Carroll’s victory. But it had little effect. Soon thereafter, the Continental Congress sent him on a diplomatic mission to Canada, Carroll served in the Continental and Confederation Congresses, and then served in the U.S. Senate from 1781–1800. Historians of Catholics are aware of Carroll, but many others would express surprise to learn of an early American Catholic who spent more than 25 years in national office.

A lesser-known example, however, better hints at the flavor of my dissertation. While at Notre Dame, I came across letters from John Cheverus, bishop of Boston, who reported that in 1811 “A very great number of members of the Legislature come to the sermons of morning & evening service” and in 1814 noted that “a great number of the members of our State Legislature” who attended the Te Deum sang in thanksgiving for the release of Pius VII in 1814. That such events were possible in the heart of Puritan country reveals how bizarrely normal the Catholic presence had become in America. Catholics were shaping early American culture in surprising ways.

The Calendar of the Univerity of Notre Dame Archives