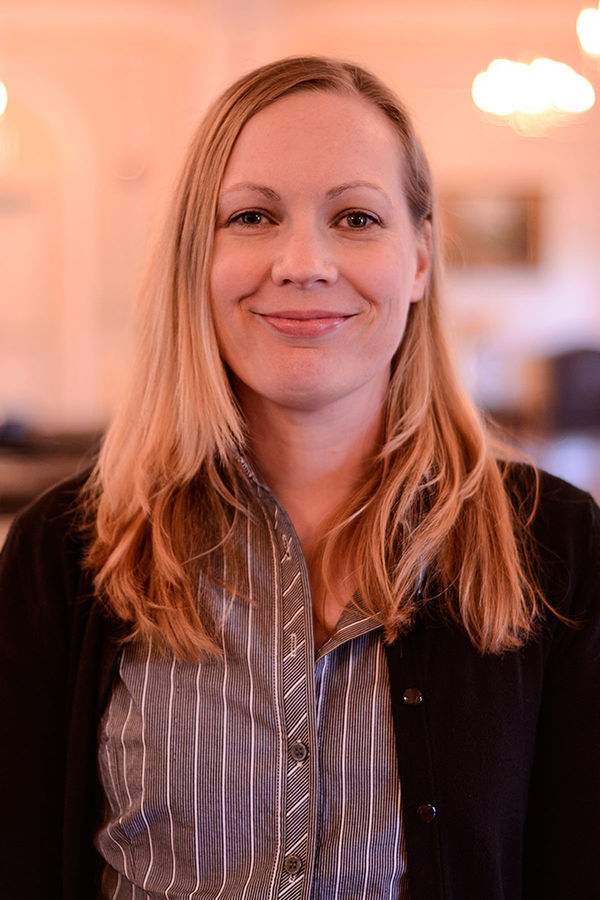 Kristen Shedd is visiting assistant professor of history at Oklahoma State University. Her research on the decline of moral and political authority in Cold War America has taken her to the Library of Congress, the American Humanist Association, Princeton University, University of Michigan, the Andover Theological Library, the California Historical Society, University of California at Santa Barbara, and the Eisenhower and Kennedy Presidential Libraries. She made a research trip to the Notre Dame Archives this summer through the support of a Cushwa Center Travel Grant in 2014.

1. To start, tell us a bit about your project.

My study is motivated by a number of questions driven by the intersection of religion, politics, and authority. How has religious authority, or the perception of it, affected governmental policy? How do politics and religion interact to shape personal and national identity? How did religious liberals adjust to a nation touting its religious freedom in opposition to an “atheistic” foe?

The early Cold War in the United States created a battle within American mainstream churches, a political and theological conflict that weakened the liberal mainline while opening the door to the revival of a highly nationalistic and evangelical Protestantism. The divisiveness within Protestantism led to new alliances and definitions of pluralism, which broadened the religious political field to include Catholics and Jews. I’m interested in what lay and religious leaders saw as the limits of secular politics and the meaning of loyalty, based on a changing understanding of religious pluralism and the separation of church and state. My research explores the extent to which religious belief determined citizenship and political action in a democracy.

I’m examining the paradox of a liberal Protestant establishment, which believed it still held cultural and political authority even as it worked to prove its national loyalty in competition with Fundamentalists and Catholics. The mainline Protestant elite was caught by surprise to find its loyalty questioned, and for the charges against them, unlike in years past, to gain traction. Because of its traditionally insider position in American politics they weren’t as effective in adapting to the Cold War context as Catholics and Fundamentalists, groups who organized as outsiders seeking access to power and legitimacy.

2. What first sparked your interest in this topic?

When I started graduate school, my interest quickly turned to the 1950s. I found the Cold War domestic political pressures fascinating, and the ways in which liberals and the left tried to cope with the changing political landscape, from unions to public intellectuals. The question of who had to prove themselves loyal, or in line with American traditions and ideals, was intriguing. The religious dimension of the Cold War, combined with the fusion of religion and politics and how contemporary Americans have talked about that fusion, further piqued my curiosity in religious outsiders and the non-religious. Were they seen as loyal or even un-American? This really led me to my current research.

3. What collections did you examine at the Notre Dame Archives?

I began by looking at the materials on the 1948 McCollum Supreme Court decision, which outlawed the Illinois program of released-time education. I’ve been analyzing the McCollum decision from multiple religious and non-religious stances, and the material I found here helped highlight the Catholic opposition to the decision. My research also includes the work of a prominent liberal think tank of the 1950s of which the Commonweal and New York Times journalist John Cogley was involved.  The papers on his early attempted political career will provide useful background.

One collection that I spent a great deal of time examining was the National Conference of Christians and Jews collection within the Edward V. Cardinal Papers. Because of my focus on the changing relationship between Protestants and Catholics after World War II, I found these papers particularly useful because of the efforts by the organization to foster a tri-faith “brotherhood” in American life.

4. Did you have any particular surprises or highlights in your time here?

A collection that I found more fascinating than I’d anticipated was the collected papers of Notre Dame theology professor John A. O’Brien. The information on reproductive issues, responsible parenthood, and the developing population debates were a highlight of my research time at Notre Dame. The issue of population control became one of increasing concern in the 1960s and 1970s and influenced discussion surrounding birth control and reproduction.

5. How does Catholic part of this story—the decline of moral and political authority in Cold War America—fit in with the mainstream Protestant part of the story, or the evangelical part?

As the Cold War deepened, the nation increasingly became less forgiving of religious criticism. By the late 1950s, individuals like the author Paul Blanshard and other outspoken critics of Catholicism—particularly within organizations like Protestants and Other Americans United for Separation of Church and State—often found themselves on the rhetorical defensive. They were denounced not only by Catholic conservatives but by former allies in liberal Protestant denominations. The Catholic Church’s support of Franco in Spain now paled in comparison to the danger of a communist past. Additionally, the McCollum decision in 1948 and the Zorach decision in 1952—which ruled released time in New York legal—retracted and then expanded the inclusion of religious education in the schools. Protestants, Catholics, Jews, and the non-religious deliberated over how much religion, and what kind of religion, should be in the classroom. This discussion was not limited to the taxpayer-supported public school classroom—it extended to the power and limits of religion and conscience in tax-supported hospitals. In the hospitals, the fight centered on the right of a religious organization to regulate or deny access to contraception. Throughout these debates concerning communism, religion in schools, and contraception, Catholics and Protestants negotiated new relationships with one another, and over time, the divisions between individuals more often reflected political rather than religious allegiance.