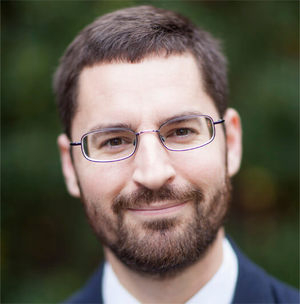 Benjamin Wetzel joined the Cushwa Center in July 2017 as a postdoctoral research associate after receiving his Ph.D. from the University of Notre Dame in 2016. He will join Taylor University in August as assistant professor of history.

We’ve kept you busy at the Cushwa Center this year writing book reviews and event recaps, managing the center’s monthly RiAH blog posts, and helping out with events and administration. At the same time, you’ve managed to teach a course and make progress on two book projects. Tell us about the research you’ve been pursuing this year.

I am currently working on two book-length projects. The first is a revision of my dissertation, done here at Notre Dame in the history department. That project explores how American Christian communities debated the righteousness of America’s wars from 1860 to 1920. Its main focus is on mainline white Protestants, who exercised the most cultural authority in that period, but it also provides sustained points of comparison with Christian groups on the margins of American life—black Methodists, Roman Catholics, and German-speaking Lutherans. My thesis is that a combination of ideological orientation (theology and its related manifestations) and social position (race, class, geography) did the most to influence how American Christians thought about the wars their nation waged. The manuscript is currently at the revise-and-resubmit stage with Cornell University Press. During my year with the Cushwa Center, I received initial readers’ reports from the press and formulated a response letter outlining the changes I would make during revisions.

My second project is a religious biography of Theodore Roosevelt (under advance contract with Oxford University Press, to be included in its “Spiritual Lives” series). The goal of the series is to produce short (80,000 words) biographies of “prominent men and women whose eminence is not primarily based on a specific religious contribution,” but for whom religious belief (or doubt) was important. The biographies are supposed to cover all the major events of the person’s life with special attention to the religious story. My life of TR will pay a lot of attention to his personal faith journey but will also situate him within the broader narrative of American religious history in the Gilded Age and Progressive Era. During my year at Cushwa, I was able to research and write drafts of three chapters and take a short archival trip to work in the Theodore Roosevelt Collection at Harvard University.

You taught a course for upper-level undergraduates this past semester on “Theodore Roosevelt’s America.” How did it go?

I was very pleased overall. The idea was that the course would be about two-thirds on the life of TR himself and one-third on the Gilded Age and Progressive Era as a whole. Of course there was a lot of intersection between the two: themes like empire, race, political developments, and even social and cultural issues all had significant overlap with TR himself. The most successful feature of the course was probably an assignment where each student had to write a short review of a recent book (written within the last 20 years) on TR, give a brief presentation to the class, and take five minutes of questions from classmates. During these sessions I could tell there was real thinking and learning going on and a serious engagement with what professional historians actually do. I am especially glad that I was able to teach this course here since I am scheduled to do a related course, The Roosevelts, during J-Term at Taylor this winter. 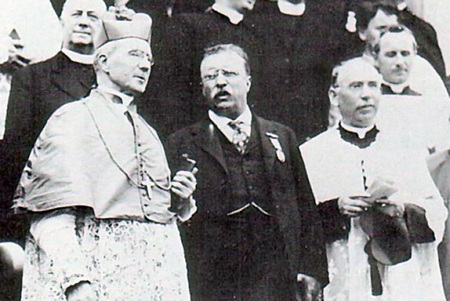 That’s a good question and a tough one. Writing a religious life of TR is not the same as writing a religious life of a major evangelist or theologian. With the latter task, there would need to be a lot of attention to personal devotional practices, thoughts on theological controversies, themes of sermons, and so forth, not to mention that there would be a plethora of sources on those topics. A religious life of TR is different since TR was not a “religious professional” and was not all that personally pious. Yet, Christianity still meant something to him. This is significant because, when taken seriously, religion has a phenomenal amount of power: it speaks to the most profound aspects of human experience, such as the meaning of life, what happens at death, and how one thinks about suffering, providence, and a host of other “worldview” questions. TR went to church almost every Sunday of his life, he read the Bible, and he practiced Christian rituals. I don’t think you can do all these things and not be impacted in some way, so, first, the biographer’s task is to figure out how this engagement with Christianity actually affected the way he approached the world.

Second, since TR was not Billy Graham or Mother Theresa, a religious biography will also have to pay significant attention to matters other than those having to do with his interior devotional life. Especially with someone as nationally influential as TR, we have to ask 1) how he fits into broader themes in American religious history, and 2) how he himself might have shaped those themes. One example of this is TR’s ecumenism: he was quite religiously tolerant for his time in holding only minor prejudices against Catholics and Jews. He appointed the first Jew, Oscar Straus, to a cabinet level position in 1906. I think that is significant for broader narratives of how Catholics and Jews entered mainstream American life.

Finally—and this gets to the “skills” part of the question—I think it is a real asset for historians of religion to be intimately familiar with the traditions they are studying. Here is what I mean: I have been in evangelical churches all my life (including in the present), so I just naturally pick up on the references TR makes all the time to the Bible. This can be a challenge since his allusions do not necessarily come with footnotes or specific references to chapter and verse. You have to know what he is referencing just by being familiar with the biblical text, even obscure parts of it. For example, if you don’t know what the Curse of Meroz is, you’re going to miss out on part of TR’s rhetoric in World War I. Now of course there can be drawbacks too for practicing Christians to be writing religious biographies (such as lack of objectivity). But, on balance, I think familiarity with the Bible as a whole (especially the King James) is crucial for those writing about figures from earlier periods. The language of the KJV was everywhere in TR’s day, in both religious and non-religious contexts, and if you don’t know it, you’re going to miss out.

What does the genre of biography allow scholars to see that other genres do not?

Like everything, biography has its strengths and its weaknesses. A major weakness is that you can get so “zoomed in” on one person that you miss the larger context. One of the strengths though, I think, is that biography naturally lends itself to narrative. If “change over time” is historians’ bread and butter, then narrative is a necessity and biography is a wonderful venue for that.

There is also a public component to this. Historians have some of the best stories in the world to tell, and we need to draw on all of our literary and artistic talents to do so. This was one of the themes of William Cronon’s presidential address at the American Historical Association in January 2013. With the humanities continuing in crisis mode in higher education, we need to do all we can to recruit students to our disciplines and show the public why what we do matters. Perhaps more than any other discipline in the humanities, I think historians are perfectly poised to do this. The public in general still consumes popular history in large quantities with biography comprising (I am sure) a large percentage of that consumption. Human beings naturally have a hunger to learn about the past and are naturally drawn to well-crafted, true stories about it, especially those that analyze outsized, colorful personalities like TR. Professional historians need to supply responsible, interesting books for this market. And we can! We’re not writing about theoretical physics, abstruse philosophical arguments, or other topics that inherently require specialized training to understand. We should be telling academically responsible stories about the past that are comprehensible to the educated public. I want scholars to see something new and valuable in my study of TR but I also want my family members who are not historians to learn something, be stretched intellectually, and enjoy the read. If we as a profession can contribute more books like this, I think we can help make the case for the necessity of the humanities.

Biography is especially helpful in this regard because readers get caught up in the personality and story of the subject and develop a love for the past. I think the genre can be a wonderful gateway into professional history (it was for me). You can tell I’m passionate about this—but I strongly believe that really good biographies can be low-hanging fruit when it comes to professional historians boosting the stature of the humanities in our public discourse.

It turns out this has been your last year at Notre Dame as you move on to a position at Taylor University. What advice would you share with other postdocs and recent Ph.D.s?

I think everyone knows it at this point, but the academic job market is simply not a meritocracy the way we would ideally like it to be. Hundreds of well-qualified people get overlooked all the time due to market constraints. Over the course of three years, I applied for a total of about 40 jobs, had five preliminary interviews, one campus visit, and one job offer (thank you, Taylor!) The job market is vastly overflooded with well-qualified applicants and that’s all there is to it. So I’m not in a position to tell everybody what they should do. But since you asked, I think a few general pieces of advice might be helpful:

1) At the end of the day, it really is all about “fit,” especially at smaller institutions. That paragraph in your cover letter might be the most important one you write, so do your homework and try to make a convincing case for why you’d thrive at that institution and how it would benefit from having you.

2) Don’t overlook the importance of teaching. Research is certainly important, especially at larger places. But smaller colleges and religiously-affiliated colleges will be vastly more interested in your teaching. So do as much teaching as you can as a postdoc, get the best student evaluations you can, and be prepared to talk about your pedagogy. Take advantage of offerings from institutes like Notre Dame’s Kaneb Center for Teaching and Learning to boost your classroom chops and to earn certificates that are concrete proof that you care about teaching.

3) On a personal level, try not to make finding an academic job the ultimate thing. Keep some perspective (earthly and eternal), cultivate relationships outside of academia, and be confident that you can do and enjoy other kinds of work as well. Life is short: don’t build your self-worth on your professional prospects.