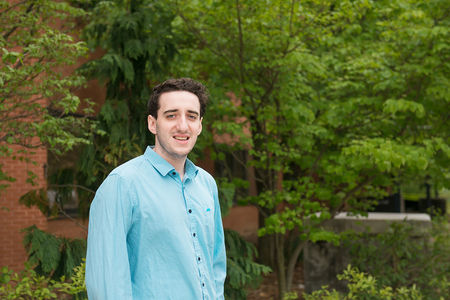 Conor Donnan is a doctoral candidate in the History Department at the University of Pennsylvania. He earned his B.A. from Ulster University (Coleraine, Northern Ireland) and his M.A. in history from the University of Maryland, Baltimore County. The Cushwa Center offered Donnan a Hibernian Research Award in 2019 to support research for his dissertation, “An ‘Empire of Liberty?’ Irish Immigrants, Native Americans, and American Imperialism in the Trans-Mississippi West between 1841 and 1924.” We caught up in the fall to discuss his work.


Shane Ulbrich: Tell us about your dissertation.

Conor Donnan: My dissertation reconstructs the interactions of Irish Catholics and Native Americans against the backdrop of American imperial expansion, industrialization, capitalistic growth, and emerging discussions about citizenship in the trans-Mississippi West between 1841 and 1924. I will be examining how the Irish became intertwined with indigenous North Americans socially, politically, and economically during the 19th and 20th centuries. Some Irish fought against Native Americans as members of the U.S. military to advance the imperial causes of the federal government, but others forged alliances with Native peoples in order to resist an Anglo-American culture that despised them both. It is a complicated story full of acts of incredible courage as well as some very villainous characters.


SU: How do you see this project intervening in the scholarly literature?

CD: I think my research intervenes in scholarly literature in a variety of ways. Firstly, it moves the study of Irish America away from the Catholic versus Anglo American binary that dominates popular memory of the field. Secondly, historians have talked a lot about how the Irish became “white” by embracing American racism and how Irish nationalism was defined by masculinity and anti-English sentiments. My work argues that the Irish were likelier to be accepted into Native American societies as leaders than by other Europeans, so their “whiteness” was in fact very fluid and circumstantial. I argue that, in fact, there was a trend in Irish nationalism that defined itself by interactions with Indians in the American West. At the same time that some Irish nationalists saw themselves as more European than the “savage Indians,” others saw themselves as akin to Native Americans because they had both lost their land to Anglo colonizers. Lastly, I think my project shifts attention away from the Irish in major cities such as New York, Boston, and Philadelphia to focus instead on the diaspora in places like Montana, Oklahoma, California, and South Dakota. Overall, I hope that this research will broaden our understanding of the Irish experience in America socially, politically, and geographically.


SU: Hibernian funds supported some of your research this summer. Tell us about the collections you’ve visited and what you’ve found. What have been the most illuminating find(s)?

CD: I have collected a vast array of primary sources through the generosity of the Cushwa Center from places such as the Montana Historical Society, the National Anthropological Archives, and the Austin History Center. In Montana, I found incredible sources such as Thomas Francis Meagher’s attempts to rid Montana of “rascally redskins” after the Civil War, as well as records of Irish traders who made millions through the Indian trade. I also found evidence of cultural solidarity between the Irish and Native Americans: James Mooney, for example, advocated for Native Americans through the Gaelic Society in Washington, and members of one of the Ojibwe nations named De Valera an honorary chief in 1919.

The most surprising story I found was that of Zelma O’Reily in Austin, Texas. She was a Choctaw-Irish woman born in the 1890s who moved from a reservation in Oklahoma to Texas in the hope of pursuing a law degree. She was an active advocate for African American and Native American rights, and she attempted to run for President of the United States in the mid-20th century.


SU: You moved to the United States five years ago from Ireland to begin graduate work. Since then you’ve contributed to a variety of digital and public history projects, including serving as a board member for the Irish Railroad Workers Museum in Baltimore. What have been some highlights of your itinerary of the past few years?

CD: Growing up in Belfast during the Troubles, I was always interested in Irish America due to the impact of the Irish American lobby on our peace process. I was fascinated by the desire of the diaspora to support people over 3,000 miles away. They provided aid for young people to visit America as well as charitable donations to houses damaged by petrol bombs, but most importantly they worked closely with Irish and British politicians to forge the Good Friday Agreement. After high school, I attended Ulster University, where I enrolled in some fascinating classes on the Irish diaspora during the 19th and 20th centuries. My mentor at Ulster encouraged me to apply to graduate programs in the United States. I got my M.A at the University of Maryland, Baltimore County, and I am now a doctoral candidate at Penn. During my time in Baltimore, I lived in the historically Irish community in the southwest of the city. It was a hub for railroad laborers in the 1860s, so many Irish families settled there. I walked the streets that those immigrants would have walked every day, where most of the houses remain from the 1840s. I related to their experience in some sense because I felt the homesickness, yearning for my family, and cultural shock that they would have faced, albeit, I suspect, much more intensely. 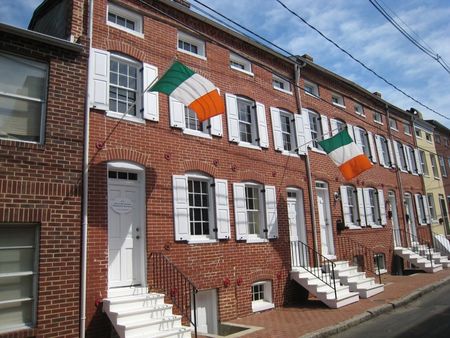 At UMBC, I became involved in digital history projects and also joined the Irish Railroad Workers Museum as a board member. I helped develop a videogame for sixth graders called Bandit which was based on the Pratt Street Riots in Baltimore during the Civil War. The Pratt Street Riots are vital to Baltimore’s history because they led to the first violent deaths during the Civil War. The purpose of the game was to help students develop the skills of a historian by exploring Baltimore to find primary sources and build their own narrative of the riots. The museum is a fantastic piece of Irish American history because it is a fully preserved house that was once owned by a family of Famine Era Irish emigrants. Our board members fought to preserve the houses and transformed them into a fantastic museum that tells the story of Irish America through the lens of one family. The small historic houses provide an insight into the life of Irish American families including their work on the railroad, the role of women in the household, and the educational systems that immigrants established for their children.


SU: What are the next steps for your project?

I am currently in the writing stages of my dissertation project. I intend to complete a draft of the dissertation within the next year. Afterwards, I hope to publish a few articles and a book based on my dissertation. I hope to make the research available to the largest possible audience, so I am trying to secure funding to develop a digital map as a companion to the book. The characters in the book would appear with bios and useful information in a digital format and people would be able to see major points of contact between the Irish and indigenous Americans on the borderlands of the West. The map would also allow users to zoom in on primary sources about Irish American and Native American figures in the Trans-Mississippi West. I believe this will add an exciting interactive component to my research.