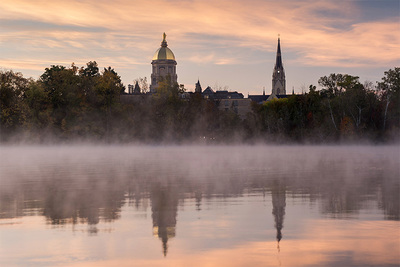 These numbers convey the basics of the April 4–6 Cushwa Center conference, Global History and Catholicism. They can’t convey its texture. When memories of particular papers dim, participants will recall spring downpours, dashing through the tunnel between the Morris Inn and the conference center, and crowds thumbing through (even purchasing!) new books by participating authors.

The setting will be only a memory, if to locals a significant one. The soon-to-be demolished McKenna Hall was inaugurated in 1966 by a major conference on the impact of the Second Vatican Council, attended by luminaries (and now historical subjects) such as Yves Congar, O.P., John Courtney Murray, S.J., Rabbi Abraham Heschel, and the development economist Barbara Ward.

Neither numbers nor texture measure effectiveness. Did it work? The conference’s goal as explained in the call for papers was simple: to explore the intersection between global history and the history of the Roman Catholic Church.

Members of the planning committee—Cushwa Center director Kathleen Sprows Cummings, postdoctoral fellow Pete Cajka, and a team including Colin Barr, Giuliana Chamedes, James Chappel, Elizabeth Foster, Udi Greenberg, Piotr Kosicki, Charles Mercier, Florian Michel, Jaime Pensado, Sarah Shortall, Albert Wu, and this reporter—sensed a surge of scholarly work on the history of modern Catholicism in particular national contexts. Some of this scholarship—James Chappel on German, Austrian, and French Catholicism, Guiliana Chamedes on Vatican diplomacy in mid-20th century Europe—already swims in a global or comparative sea, but even here we thought much conceptual work remained undone. From Olivier Chatelain at the conference itself we learned of parallel conversations in the Francophone literature.

We knew that a conference on global Catholicism demanded a broad geographical representation; we decided to set chronological borders beginning in the late-18th century and continuing to the present; we hoped for an opening keynote from a major scholar who could orient us to the big picture; and we became convinced that we needed a plenary discussion of sexual abuse given the issue’s centrality and the contribution historians might make to assessing the global dimensions of the crisis. We thought it prudent to have a wrap-up session and discuss how it all went. 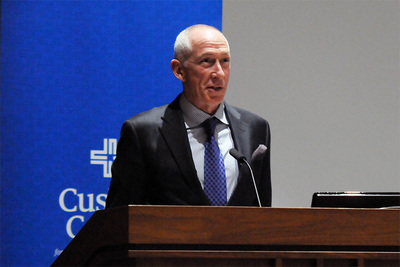 Much went well, at times thrillingly. Jeremy Adelman’s keynote address—on the Catholic world system he identified in the early modern era, with French, Spanish, and Portuguese Catholic empires jostling against one another even as religious networks in part bound them together—established a wonderful model and was repeatedly invoked. The chronological range of the program tilted toward the 20th century, although 18th-century papers, such as Shaun Blanchard’s on Jesuit-Jansenist conflicts and Claudio Schettini’s on the Catholic reaction to the French Revolution, were exemplary. The geographical range of the program was broad, with a rich set of papers, for example, on Chinese Catholicism, often building on Albert Wu’s recent study of German missionaries there. Cameroon, Uruguay, Canada, and the Netherlands received good attention. Less happily, no papers focused on such crucial Catholic sites as Poland and even central and southeastern Europe more broadly, where too few historians (Brian Porter-Szucs, John Connelly, and Piotr Kosicki are exceptions) hurdle the linguistic barriers limiting Anglophone scholarship. Virtually no one mentioned the Philippines, remarkably, and even Brazil received little attention, although Brazilian Catholic students in the 1960s popped up in the excellent papers on transnational movements.

Panelists did better than we could have hoped at making connections across the global Catholic sphere. Florian Michel showed how 20th-century French scholars such as Étienne Gilson “globalized” the study of Thomas Aquinas. Jaime Pensado, Caroline Sappia, Gilles Routhier, and others drew important connections between Europe, Canada, and Latin America in the 1960s. (References in these essays to a memorable Catholic student conference in Montevideo in 1962 that included presentations by the educational theorist Paulo Friere and the liberation theologian Gustavo Gutiérrez made audience members yearn for a full transcript.) Deirdre Raftery’s smart investigation of convent schools in India and Australia reinforced the centrality of women religious to modern Catholic history, with the Sisters of Mercy, for example, also emerging as the bedrock of the Irish diaspora sketched so vividly by Colin Barr. Catholic Action and anti-communism as social movements appeared in Charlotte Walker-Said’s Cameroon, Alison Fitchett Climenhaga’s Uganda, Robert Dennis’ Ontario, and Giuliana Chamedes’ Italy; Catholic anti-Semitism as traced by Nina Valbousquet moved from France to Italy to the United States.

Any selection of topics is idiosyncratic, but the single most promising global Catholic node displayed at the conference might be decolonization. Nothing better joins the great “Catholic” empires such as France, Belgium, Portugal, Italy, and Spain (along with the at times surprisingly Catholic empires of Britain, Germany, the Netherlands, and the United States), the indigenous people who in turn reshaped these empires, and the Vatican politics that thwarted and furthered the ambitions of all concerned. Elizabeth Foster’s path-breaking work on African Catholicism in Senegal and Paris, with African student activists shaping religious and political life on both continents, is an exciting model. So too is Udi Greenberg’s incisive essay in the latest American Historical Review, previewed at the conference, on the strange history of Protestant-Catholic ecumenism and its meaning in 1930s Germany and later in the global South. Jean-Luc Enyegue, S.J.’s probe into Cameroon in the 1970s indicates, too, how after the Second Vatican Council a faith committed to an African sensibility rearranged the conventional mental furniture of what being Catholic meant.

The first plenary session on Saturday centered on Robert Orsi’s discussion of sexual abuse and what he termed the Catholic “global-local-in-between.” In Orsi’s account of a nun sexually abused by her priest confessor and abused in a different way by church authorities who tried to silence her, Catholic globalism becomes—more than a neutral, even admirable, characteristic—a cover up mechanism. That Catholic actors—notably bishops and priests in religious orders but others as well—moved with ease across national borders and diocesan lines meant that church officials had multiple avenues available to evade not only legal authorities but also their own devastated communicants. 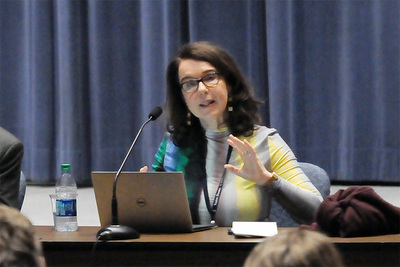 Panelists at the final plenary session meditated on next steps. Ruth Harris roused attendees from their exhaustion and urged them to think comparatively, not just between Catholic and Protestant but, drawing on her own work, Catholicism and Hinduism. Along with other participants she rightly noted the relative absence of theology (an important exception being Sarah Shortall’s work on mid-20th century French theologians) and the need to think about material culture and devotions. We need more research, it was suggested, on the history of sexuality; more, too, on the importance of Catholicism to Christian Democratic movements. We need to recognize even more than we do now the extraordinary archives available for so many Catholic subjects in Rome.

And so on. The promise of the conference—perhaps the promise of the global Catholic project—lies beyond subject lists or topic sentences. Instead it lies in the animated conversations between established scholars and graduate students in the session breaks and the post-confessional ease with which scholars from all backgrounds discussed fraught topics. It lies in the dozen or so recently published books on display. It lies in the conviction, reinforced by these exhilarating days, that the study of modern Catholicism might make an important difference to both global history and Catholic self-understanding.

John McGreevy is the Francis A. McAnaney Professor of History at the University of Notre Dame.