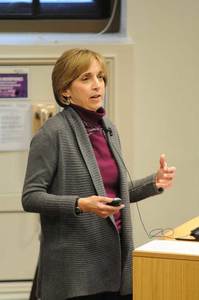 On February 23, Gretchen Buggeln presented a lecture titled “Art, Architecture, and Liturgical Space in Postwar America.” Buggeln holds the Phyllis and Richard Duesenberg Chair in Christianity and the Arts at Valparaiso University, where she is on the faculty of Christ College. Cosponsored by the Notre Dame Center for Liturgy, the Institute for Church Life, and the School of Architecture, Buggeln’s lecture was based on her forthcoming book, The Suburban Church: Modernism and Community in Postwar America, which will be published by University of Minnesota Press in December.

Buggeln opened with a story from her first year at Valparaiso, when a colleague asked what she thought of the university’s Chapel of the Resurrection, a modernist structure built from 1956 to 1959 by architect Charles Stade. “This is a loaded question on our campus,” she explained. She answered honestly: “When I saw this for the first time I did not immediately think, ‘Wow, what an amazing building! So beautiful!’ But I did think, ‘How interesting!’ And that is what has motivated my research.”

Buggeln then offered three broad themes to help explain what American churches built in the postwar era. First, there was a common belief in the postwar years that the art and church architecture of the previous generations was derivative and inauthentic. “This is more intense than simply not liking the fashions of one’s parents and grandparents,” she said. By the late 1950s, even people in the pews were joining architects and artists to suggest that the recent past’s reliance on Gothic styling was “wrongheaded.”

Second, there was uncertainty over the future of both the church and the world. “After a devastating war that recalibrated the moral outlook of many Americans, the world seemed to require a new faith tuned uniquely to the crises of the day,” Buggeln said.

The third broad theme was that practical and financial concerns drove building projects of the period. Scores of young families moved to the suburbs each year, causing a need for more—and bigger—churches. These families had limited financial resources, and Buggeln said during the course of her research she interviewed many people who told her about how they “scrimped and saved” to pay their building pledge. “Despite a lack of funds, there was a postwar boom in church building on a scale not seen before or since,” she said.

Buggeln continued by suggesting that these three broad factors had three specific effects on church building. First, in the Midwest, there was a gradual, “but certainly not uncontested,” triumph of modernism. “Everybody wanted to get in on that [modernist] bandwagon,” she said, showing several slides of churches in Illinois that only loosely fit the term, sporting pillars and steeples and large windows. “We might not consider these terribly modern, but that’s the way they saw it,” she said.

The second specific effect was that new and cheaper building materials were well matched to contemporary design. “For both practical and really convincing ideological reasons, especially in the suburbs, the churches look like schools and banks.” That same desire for cultural relevance led to the third specific effect, Buggeln said, which was an examination of Christian symbols and a renewed concern about how they would be deployed in these spaces.

Buggeln divided the remainder of her lecture into two parts. First, she introduced three prominent architects—Edward D. Dart, Edward A. Sövik, and Charles E. Stade—and discussed their influence on the changing character of worship space during the postwar period. Afterward, she turned to the topic of liturgical art of the period, presenting images of particular pieces that embodied the spirit of the era.

The three architects Buggeln highlighted each had a slightly different emphasis. Edward D. Dart (1922-75), of Barrington, Illinois, was most well known for Water Tower Place in Chicago and St. Procopius Benedictine Abbey in suburban Chicago, but he also designed about two dozen churches. Edward A. Sövik (1918-2014), of Northfield, Minnesota, designed hundreds of churches and wrote extensively about architecture and theology.

Sövik was the most broadly influential of these three architects. Charles E. Stade (1924-1993), of Park Ridge, Illinois, designed Valparaiso’s Chapel of the Resurrection and hundreds of suburban churches. Buggeln showed dozens of images of churches they designed, focusing on some of their distinctive characteristics. For example, Stade was known for his A-frame churches.

“For a worship space to succeed, it needs to support the particular ritual of the denomination,” Buggeln said. A design needs to be “convenient and meaningful to the congregation as they move their attention to different points of focus in the worship service.”

While postwar congregations wanted their sanctuaries to feel right for worship, Buggeln said, “This seems to have been a difficult and moving target. They were on a quest for the experience of the presence of God. This makes a lot of sense when you think about these busy families in the suburbs. I interviewed numerous people who said things like, ‘I wanted peace—I had five kids at home, I was working really hard, trying to keep things going financially, and when it came to that hour on Sunday, I wanted to be in a place that was peaceful.”

Buggeln cited historian James White’s work from the 1960s, which identified two traditions of worship space: the more informal auditorium style (a broad stage with rows of seats fanning outward from the pulpit, focused on immanence) and the more formal romantic style (a long, rectangular seating room with a central aisle, focused on transcendence). Postwar architects debated the proper format and arrangement of the sanctuary; Martin Marty—whose first pastorate, the Lutheran Church of the Holy Spirit in Elk Grove Village, Illinois, was an example of postwar church architecture that Buggeln presented—and his colleagues talked about “the tent for God’s people on the march and the cave for sacred spelunking,” Buggeln said. “Those are two very different ways of thinking about worship space, and it’s difficult to imagine trying to accomplish those things in one building.”

Buggeln spent some time discussing St. Paul Lutheran Church in Mount Prospect, Illinois, describing the congregation’s debate about whether to choose a modern or traditional style, ad how they eventually proceeded with the modern style. She also discussed the character of furnishings and décor. “The language of fitting in is popping up in the records all the time. [Congregations] didn’t want to be this magnificent statement on the landscape. They wanted to be warm and welcoming and friendly and comfortable. It’s the same way megachurches today talk about how they want their spaces to be—but it’s a different time, and different material.”

The final part of Buggeln’s presentation focused on liturgical arts. “These three architects believed there should be a coherence between architecture and art in the service of the liturgy,” she said. They encouraged building committees to engage professional artists early in the planning process, even though art was an added expense for congregations that were already stretched financially by building costs.

Sculpture, stained glass (also faceted glass, a structural art form of concrete and glass), painted murals, and mosaic work all complemented the postwar church architecture. Buggeln showed examples of such art from throughout the Midwest and other areas. She focused on one particularly common type of artwork in which word and image were combined, or words themselves were rendered as art in wood, stone, or glass.

“These buildings and the art that’s in them [serve as] a rich repository of the ideas that animated American congregations in the postwar years,” Buggeln concluded. “This is a significant and unique episode in American religious history, and the way that faith took material form… is really quite a revealing window into the religious culture of the place and time.”