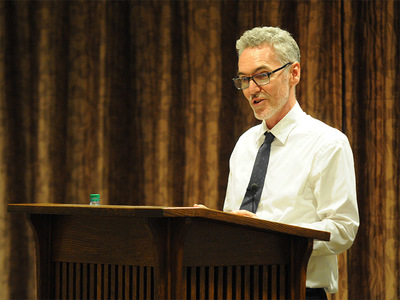 According to Ian McBride, the history of modern Ireland is haunted by a “spectacular disparity” when it comes to the number of books published on some of the period’s most important topics. Online databases show that historians have written 550 books on the Easter Rising of 1916, and 300 books on the Irish Famine, but only 15 books on the penal laws. The penal laws, a series of ordinances constraining Catholic life in Ireland and privileging Anglicanism, shape Irish history as profoundly as events like the Revolution of 1798, but receive significantly less coverage in historical surveys of modern Ireland.

The penal laws reigned, according to McBride, as “the basic fact of Irish political life for 100 years.” Parliament had them in place by 1690 and the regulations rested on the books for almost the full run of the 18th century.

The lack of curiosity about the penal laws, and the resulting dearth of research, stem from an idea accepted by many Irish historians that the laws were merely words—unenforced codes detached from reality—and therefore irrelevant to social practice and daily life in Ireland.  McBride noted that the first thing any Irish schoolboy or schoolgirl learns about the penal laws is their general inefficacy. As many accounts like to point out, in spite of the laws, Catholics held mass openly and continued to manage a range of institutions including parishes and schools.  Routine flouting of the regulations is taken to signal that the penal laws did not have serious consequences in Irish life. Historians therefore portray the ordinances as dead letters.

The Foster Professor of Irish History at Herford College, University of Oxford, McBride received a Leverhulme Major Research Award to study the reshaping of Catholic Ireland under the penal laws. Much of his current effort is being carried out in Rome, where a number of exceptionally rich archives contain unexplored material on the subject. In his Hibernian Lecture delivered September 22, 2017, McBride explained to a packed auditorium in Notre Dame’s Geddes Hall why the penal laws are worthy of new research. In his view, they represent a subtle but highly effective colonial imposition of reforms that unleashed a wave of social tensions across 18th-century Ireland.

The significance of the penal laws, McBride said, resided in the “petty tyrannies” the laws produced in local communities across Ireland during the 18th century. The task of the historian, he argued, is to add up these petty tyrannies—communal conflict, clerical infighting, and Protestant-Catholic competition—in order to understand their cumulative effects on Irish social and political life.  They amounted, in his words, to a program of “social and cultural engineering” intended to legislate Catholicism “out of existence.”

Historians, McBride contended, must visit archives in Rome if they hope to understand the penal laws and their impact on Irish society.  Officials at the Vatican declared Ireland a “mission territory” in the 18th century, placing it under the care of the Sacred Congregation for the Propagation of the Faith (Propaganda Fide) until the Irish Church could stand on its own financially and institutionally. Thus, Catholic officials in Rome arranged for most of the official correspondence from Irish institutions to be sent to bureaucracies in the Eternal City.  Important decision-makers at the Vatican, in charge of the Irish “mission territory” throughout the 18th century, had information about local Irish affairs placed at their fingertips. The penal laws’ “petty tyrannies” are to be found in the papers of Propaganda Fide and the collections of various papal nuncios, the special diplomats that represent the Holy See.

Sources from Roman archives allow McBride to tell the story of how one parish priest, Father Malloy, used the penal laws to win a jurisdictional dispute with fellow cleric Father Burke, a Dominican. Burke returned from Rome to find the parish he had been promised occupied by Malloy, a popular parish priest. Both Malloy and his local bishop made the case in letters to Rome that Malloy should be allowed to keep his parish. The Protestants would never allow a priest from a religious order to take up ministry locally. Protestants would tolerate a parish priest in their midst but not a “monk bishop” from the ranks of the Dominicans. Malloy even invited a local member of Parliament to shut down the parish under the mandate of the penal laws in order to keep Burke from taking over. It didn’t matter to Malloy that the parliamentarian he asked to shut down his beloved parish was involved in a local campaign to promote Protestant education and close Catholic schools.  Malloy turned to Protestant members of Parliament, and the political conditions created by the penal laws, to gain a strategic advantage over a co-religionist.

Unexpectedly, McBride finds a constant complaint in letters and reports sent to Rome that Irish bishops were ordaining too many men to the priesthood in the 18th century. The penal laws were designed to diminish the enrollment of men in Irish seminaries—and seriously curtail the power of Catholics to spread the faith—so why did letters brim with complaints about an excessive number of unqualified Irish priests? Reports sent to Rome reflect an Irish Church in a state of “disarray and dysfunction,” as McBride put it. He concluded, however that the high number of priests was a direct result of a structural crisis induced by the penal laws.  The English regulations drained the talent pool by driving many elite Catholic families out of Ireland, leaving only men from less educated backgrounds available to shepherd the Irish faithful. The penal laws drove bishops to expedite the process of priestly formation for financial reasons. Bishops—who received a chunk of money from every man they made a priest—ordained men to the priesthood who had not fulfilled the requisite educational requirements. Catholic authorities pressed for cash by the constraints of the penal laws found in holy orders a significant source of revenue.

McBride learned from letters sent to Rome that Vatican officials begged authorities to intervene with the Irish bishops to raise standards for entry into the priesthood. Reports are full of disparaging remarks that these Irish men of the cloth had no true calling to the priesthood, lacked education, and had myriad moral and pastoral failings. Priests in Rome, for example, complained that the 300 men who studied at the Irish College had no means to support themselves. The Penal laws were more than slogans: the confusion the laws created in the church generated internal tensions among Catholics themselves. 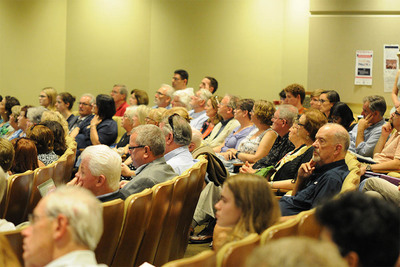 Questions from the audience placed the penal laws in historical context and the global historiography of conquest. Thomas Kselman wondered if the Enlightenment had an impact on 18th-century penal laws. McBride responded in the affirmative: the laws fed off the Enlightenment quest for a universal reason that trumped Catholic and other forms of religious localism. Historian Patrick Griffin asked McBride to situate his story about the penal laws within the longer legacy of conquest and oppression in the 18th-century world. Father Bill Miscamble asked McBride to offer a comparison between the Irish Church under the penal laws and the Polish Church under communist rule. If a church goes underground, does it grow in faith and solidarity? McBride responded that a strong Irish Catholicism would not reemerge until the second half of the 19th century under the auspices of the devotional revolution. He did not think the penal laws were responsible for the resurgence as Catholic life remained difficult, in terms of poverty and institutional life, for the first half of the 19th century. The question and answer prompted a discussion about what Catholics learned from life under the penal laws. McBride and the audience discussed the possibility that Catholics had become more cunning under the British regime, learning the arts of “conspiracy and disguise.”

With the help of new sources in Rome and elsewhere, McBride’s continued study of the penal laws promises to answer these and other questions. He plans to publish a book on the subject and his efforts will take the field one step closer to addressing the “spectacular disparity” that marks modern Irish historiography.