Saving America’s Cities:
Ed Logue and the Struggle to Renew Urban America in the Suburban Age 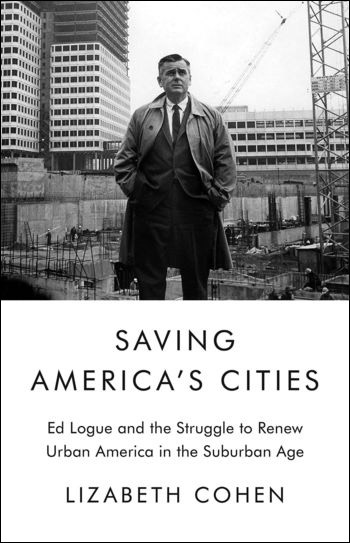 In Saving America’s Cities, distinguished Harvard historian Lizabeth Cohen rejects the Moses/Jacobs dichotomy for obscuring more than revealing. She argues instead that the “urban renewal of American cities in the era of mass suburbanization deserves to be painted more in shades of gray than in black and white” (15). Cohen sets out to write a nuanced history of the topic by examining the life of Ed Logue, whose high-profile career from the early 1950s through the mid-1980s closely tracks urban renewal’s rise and fall in the United States. In Logue, Cohen finds a protagonist who occupies the gray area between the caricatures of Moses and Jacobs. In this meticulously researched and sophisticatedly argued book, Cohen works hard to portray Logue as a complex figure and succeeds in doing so. On the one hand, the hard-charging, Yale-trained lawyer was “deeply invested in expert-driven activist government” (11). Early in his career, for example, he adopted the large-scale, centralized, top-down approach to city rebuilding prevalent during the postwar period. On the other hand, as a product of lower-middle-class, Catholic Philadelphia, Logue was partial to the underdog, adopting as his professional motto the phrase “Planning with People.”

Cohen argues that Logue’s Roman Catholic upbringing explains his commitment to social justice, particularly his steadfast support of advancing racial equality through government policy. The oldest of five children, he was 13 years old when his father died during the Great Depression. Absent the family breadwinner, Logue and his younger siblings switched from parochial to Philadelphia public schools. His aunt—a Sisters of St. Joseph nun—arranged for him to receive a free ride to the Catholic University of America, but Logue instead chose to attend Yale as a scholarship student. A “New Dealer to the core,” Logue felt more at ease with Catholic and Jewish classmates at Yale—outsiders, like himself—than the Waspy alumni of elite prep schools who dominated campus culture (27). A political science major, he was a union activist, helping start a local chapter of the Congress of Industrial Organizations for Yale staff members. In a recurring theme throughout the book, Cohen describes Logue, who was at once an insider and an outsider, as a “rebel in the belly of the establishment beast” (31).

During World War II, Logue served in the Army Air Corps, flying missions as a bombardier over Italy. He later remarked how the aerial perspective on European cities influenced his urban renewal work—a bird’s eye viewpoint, Cohen notes, shared by Le Corbusier and other modernist planners. After the war, Logue earned a law degree from Yale and entered private practice, but it quickly bored him. Involving himself in Democratic politics at the state level, he worked as an aide for Governor Chester Bowles who subsequently named him Connecticut’s secretary of labor. When President Harry Truman appointed Bowles the U.S. ambassador to India (1952–1953), Logue followed as a special assistant. His brief time in India added international perspective to his understanding of central planning and New Town design.

Tracking Logue’s career as an urban renewal leader, Cohen divides the book into three parts, each corresponding to locations and periods of Logue’s career: (1) “New Haven in the 1950s: Creating a Laboratory for Urban Renewal”; (2) “Boston in the 1960s: Rebuilding the City on the Hill”; and (3) “New York in the 1970s and 1980s: Winning and Losing an Empire in the Empire State.” The three sections also parallel major phases of urban renewal in the United States: (1) the top-down approach of the 1950s; (2) the more balanced government/community partnerships of the 1960s; and (3) the participatory democratic processes and regional strategies in the 1970s, as well as the small-scale, locally administered projects of the 1980s.

In each of the three phases of his career, Logue worked closely with and enjoyed the patronage of a powerful elected official: Mayor Dick Lee in New Haven (1953–1960), Mayor John Collins in Boston (1961–1967), and Governor Nelson Rockefeller in New York (1968–1973). In New Haven, Lee and Logue worked hand in glove, securing the highest per capita rate in the nation of cities receiving federal funding for urban renewal. The mayor and his urban renewal administrator used eminent domain and extensive demolition in Connecticut’s second largest city to construct a series of often controversial modernist housing and commercial projects.

In January 1961, just shy of his 40th birthday, Logue took over urban renewal in Boston, earning a salary 50 percent higher than either the mayor of Boston or the governor of Massachusetts. Mayor Collins hired Logue not only for his expertise and experience, but also because he was an outsider to Boston, a city deeply polarized along racial, class, and religious lines. Logue needed to work diligently to develop alliances with key groups: the downtown Yankee banking and business leaders; the powerful Catholic Church under Cardinal Richard Cushing; the media, particularly the Boston Globe; and the architectural community. Cohen emphasizes the important role played by Cushing’s right-hand man, Monsignor Francis “Frank” Lally, the liberal editor of the archdiocesan newspaper, The Pilot, and longtime chairman of the Boston Redevelopment Agency (1960–1970). As in New Haven, controversy followed some of Logue’s projects in Boston (e.g., the unpopularity of Government Center’s Brutalist architecture and bleak plaza), but he also achieved a series of downtown redevelopment victories (e.g., the renovated Faneuil Hall and Quincy Market). In Boston’s neighborhoods, Logue’s record was mixed. As she analyzes the outcomes of Logue’s work, Cohen applies terminology used by a scholar of Boston’s “rehabilitation planning game,” determining “winners” and “losers” in each neighborhood.

Cohen points out that Logue was a nationally recognized figure by the late 1960s, with the Washington Post referring to him in 1967 as the “Master Rebuilder,” Look magazine calling him “our top city saver” in 1968, and the New York Times in 1970 dubbing him “Mr. Urban Renewal” (6). Just as Logue’s career peaked, so did the urban crisis in the United States. White flight, deindustrialization, urban riots, and reduced federal funding conspired to cripple cities, as billions of dollars from public and private investment along with millions of white Americans poured into the suburbs. When his patron John Collins declared in 1967 that he would not seek a third term as Boston’s mayor, Logue threw his hat into the race but came up short.

Logue, however, was not out of work for long. New York governor Nelson Rockefeller hired him to lead a newly created government authority, the Urban Development Corporation (UDC), a kind of “fourth branch of government” allowed to issue bonds without voter referendums (259). Rockefeller created the UDC, one of several New York State public benefit corporations, to raise money for urban renewal and housing projects at a time when other state and federal funding sources were drying up. Running the UDC attracted Logue because it addressed a planning obstacle he had long lamented: most redevelopment issues encompassed metropolitan regions, crossing political borders between cities and suburbs. The UDC offered him, for the first time in his career, the opportunity to tackle issues at the metropolitan level. In his nearly eight years heading the UDC, Logue enjoyed several successes, including the development of New York City’s Roosevelt Island as a model for mixed-use urbanism as well as building New Towns on previously undeveloped land in upstate New York. There were also bitter defeats, however, most notably the UDC’s failure during the early 1970s to build affordable housing in Rockefeller’s home county. Logue’s idealistic use of housing policy to achieve racial equality in Westchester County ran head-on into massive resistance to government activism by white suburbanites.

Cohen notes two bellwethers of urban renewal’s demise during the first half of the 1970s: President Richard Nixon’s 1973 moratorium on federal funding for all new conventional public housing projects (except for those serving the elderly), and the 1975 collapse of the UDC under charges of financial mismanagement by Logue, who no longer enjoyed the protection of Rockefeller following the governor’s resignation in late 1973. In February 1975, New York’s new governor, Hugh Carey, opened an investigation into the UDC and held public hearings; Logue was cleared of any malfeasance. The UDC hearings, however, writes Cohen, “marked the end of an era of confidence in the problem-solving capacity of the government, particularly at the national level, and the dawn of a new era of more privatized solutions” (6). The UDC nevertheless produced impressive results. Between 1968 and 1975, the government authority was responsible for building more than 33,000 housing units serving 100,000 people in 49 New York cities and towns (270).

Logue’s final act took place on a smaller stage, emblematic of the decline in public support and government funding for urban renewal. In 1978, New York Mayor Ed Koch reluctantly hired Logue, tainted by the UDC debacle, to head up the South Bronx Development Office. With a modest salary, office, and staff—politically weakened, but undeterred—he collaborated with community partners during the next several years to build Charlotte Gardens, a collection of 90 single-family houses: raised-ranches complete with white picket fences and small yards. Where burned-out buildings, empty lots, and overturned cars once signified the worst kind of urban decay, a well-ordered neighborhood now anchored urban revitalization. Working-class families from African American, Latino, and Asian American backgrounds—all first-time homeowners—bought their own piece of the American Dream. By the mid-1980s, the South Bronx success story garnered national media coverage.

Cohen’s biography of Logue is sympathetic but not uncritical. She assures her readers that she does not “hold up Logue as any kind of hero.” On the one hand, she notes his many admirable qualities, including a “utopian idealism…promoting the public good,” unyielding resistance to McCarthyism, and progressive views on race. On the other hand, she admits he found it easier to work with “an older generation of integrationist black leaders than their more demanding successors.” Moreover, Logue did not prioritize the advancement of women in the “hyper-male style” that he and his overwhelmingly male staffers brought to their redevelopment work (11–12). In the end, the author shows Logue to be a complicated figure, neither saint nor villain.

Likewise, the history of urban renewal is complicated. “Condemnation of urban renewal as practiced for a quarter of a century after 1950 stems in no small part, I would argue,” Cohen writes, “from the unquestioning acceptance of a distorted, oversimplified depiction of it as a decades-long, undifferentiated, and unmitigated disaster…Although many serious mistakes were made, important lessons were also learned…Urban renewal as experienced in 1972 was far different from that in 1952” (10). In other words, urban renewal, like the career of Ed Logue, was not static. It evolved over time.

Saving America’s Cities is a tour de force. It is a biography of Ed Logue and a history of urban renewal in the United States, but it is also much more. In ways we have come to expect from Lizabeth Cohen, she weaves into the historical narrative a series of important storylines and questions of contemporary relevance. Skillfully merging political and social history, the author manages to write a history of urban renewal from both the top down and the bottom up. The reader learns in detail how academics, activists, architects, community leaders, journalists, planners, policymakers, politicians, real estate developers, religious leaders, and ordinary Americans influenced how urban renewal evolved during four decades in the second half of the 20th century. In the process, Cohen raises important questions about democracy, the role of government, and how Americans might renew their cities in the 21st century.

Timothy B. Neary is professor of history at Salve Regina University.

This review appears in the spring 2020 issue of the American Catholic Studies Newsletter.