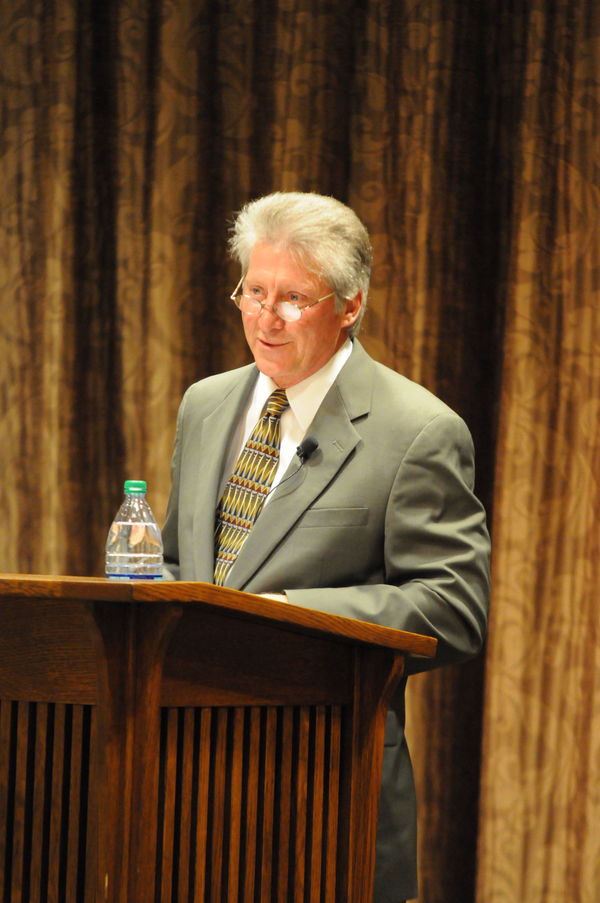 On September 26, Ron Hansen presented a public lecture titled “On Being a Catholic Writer: Seeing into the Middle of Things.” Hansen is the author of nine novels, including Mariette in Ecstasy, Exiles, Atticus, and, most recently, A Wild Surge of Guilty Passion. He is also the author of several collections of stories and essays, including A Stay against Confusion: Essays on Faith and Fiction, and She Loves Me Not: New and Selected Stories. Hansen is the Gerard Manley Hopkins, S.J., Professor at Santa Clara University, where he teaches courses in literature, fiction writing, and screenwriting.

“I hesitate to try to explain those quotes,” Hansen said. Rather, the quotes served as touchstones that he continually returned to during a set of wide-ranging meditations on the concept of attention.

Hansen’s reflections began with scripture, recalling the words of St. Paul to the Corinthians: “For now we see through a glass, darkly; but then we shall see face to face: now I know only in part; but then shall I know fully, even as I have been fully known.” He then moved to psychology, mentioning a friend’s conviction that the fundamental reason people marry is a desire to be fully known. “We seek a deep and persistent insight into ourselves that we can only get through intimacy with another,” said Hansen. “We read fictional narratives and memoirs for that reason, too.”

Next he took a physiological perspective on sight, sharing with his audience what he’d learned about how the eye works. He spoke of the lens and the eye’s ability to adjust for light and distance, but then explained how the eye is different from a camera: “When we speak of seeing, we’re speaking of the hard mental activity of decoding…. Although we’re not aware of it, that mental processing is so exhausting that scientists have estimated that close to 40 percent of our at-rest caloric consumption is devoted to that interpretation. The only job of a huge percentage of our higher brain function is recognizing what is right in front of us.”

Hansen recalled a story told by Annie Dillard in A Pilgrim at Tinker Creek in which she writes of post-operative cataract patients and how they responded to sight after a life of blindness. While some were upset by the experience, others were awestruck. Dillard used the story to consider her own experience of sight: “I see within the range of only about 30 percent of the light that comes from the sun; the rest is infrared and some little ultraviolet, perfectly apparent to many animals, but invisible to me.” Even those with “perfect” sight can’t help but miss so much.

Another way our sight is limited, Hansen suggested, is that all of our glimpses are fleeting. Hansen mentioned Kurt Vonnegut’s deep space aliens, the Tralfamadorians, and their sophisticated vision in the novel Slaughterhouse Five. He quoted: “All moments, past, present and future, always have existed, always will exist. The Tralfamadorians can look at all the different moments just that way we can look at a stretch of the Rocky Mountains, for instance. They can see how permanent all the moments are, and they can look at any moment that interests them. It is just an illusion we have here on Earth that one moment follows another one…and that once a moment is gone it is gone forever.”

Hansen jumped from Vonnegut to Gerard Manley Hopkins, S.J., the 19th century British poet who once penned in his journal “What you look at hard seems to look back at you,” and who inspired the Jesuit philosopher Pierre Teilhard de Chardin to develop a theology based on the examination of the “within” of things.

“In his journals and poetry, Hopkins saw into the middle of things,” said Hansen. “Seeing gave rise to feeling, and closely observed actualities gave rise to religious emotion, as in his famous hymn to creation, “Pied Beauty”:

Glory be to God for dappled things—
For skies of couple-colour as a brinded cow;
For rose-moles all in stipple upon trout that swim
Fresh-firecoal chestnut-falls; finches’ wings;
Landscape plotted and pieced—fold, fallow, and plough;

And áll trádes, their gear and tackle and trim.
All things counter, original, spare, strange;
Whatever is fickle, freckled (who knows how?)
With swift, slow; sweet, sour; adazzle, dim;
He fathers-forth whose beauty is past change:
Praise him.

Our contacts with the arts, Hansen said, in whatever medium, are facilitated by our attention. Hansen recalled seeing Ingmar Bergman’s movie adaptation of The Magic Flute, which begins with an overture of faces in an opera audience. “We as an audience have no place to go, so we watch the faces. We find in our attentiveness and Bergman’s attentiveness that all those faces are interesting. None that I recall fulfilled my own culturally enforced standards of beauty. But I recall feeling a great happiness, a joy in community, and I realized I needed to look closer at the world, to be more attentive.”

Hansen returned to scripture to consider the story of Adam and Eve and their relationship to God. “The most interesting part of the story is the reality that God is frequently calling out to us— ‘Where are you?’—while the humans give in to their tendency to hide, to feel ashamed, to lie about our sins,” Hansen said. “We think God only loves the prettiest aspects of ourselves…. We think that God would rather not see us in our full humanity.”

At this point Hansen introduced a related but different term. To overlook means to view from on high, but also to forgive or ignore indulgently. “The gift of the arts, whether narrative or representative, is that they overlook our lives just as God does, giving us the same stabilizing sense of overview and attention for our relations, our fears, our sins, our yearnings, and our plights. The gift of fiction, poetry, memoir, and all the arts is to let us see others in their most unprotected moments—the moments in which they are fallow ground—and then see them cultivated, or not, under our watchful, caring eyes.”

“His thoughts on seeing into the middle of things,” Hansen concluded, “is the joy and obligation for all of us who consider ourselves attuned to the various signatures of God in the world.”

For more on our Fall events, see the Spring 2015 American Catholic Studies Newsletter.