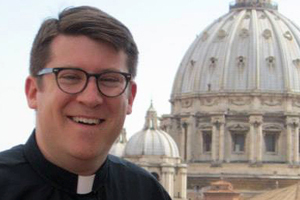 We recently sat down with Research Travel Grant recipient Stephen Koeth, C.S.C., about his dissertation research on the postwar suburbanization of American Catholics. Stephen, a Holy Cross priest, is a doctoral candidate in history at Columbia University. His writing has appeared in The Journal of Church and State and U.S. Catholic Historian.

This interview was previously posted at Religion in American History.

1.  Tell us about how your project developed.

My dissertation explores the postwar suburbanization of American Catholicism by examining the creation and expansion of the Diocese of Rockville Centre in suburban Long Island, which throughout the 1960s was one of the fastest growing Catholic communities in the country. It describes how Catholic pastoral leaders grappled with the rapid exodus of the faithful from urban ethnic neighborhoods to newly built suburbs, and how Catholic sociologists and intellectuals assessed the effects of suburbanization in reshaping definitions of family, parish, and community. I also hope to trace how changing experiences of family and community, the economics of suburban life, and efforts to build and maintain suburban Catholic schools altered lay Catholics’ view of the state and their voting habits, thus transforming Catholicism’s role in American politics from the New Deal to the Reagan Revolution.

This topic first began to take shape when I read Tom Sugrue’s contribution to Catholics in the American Century, one of the most recent volumes in the Cushwa Center Studies of Catholicism in Twentieth-Century America series. Sugrue pointed out that “the history of Catholic suburbanization … and its implications for Catholic politics remain mostly unexamined.” And yet, Sugrue argued, suburban Catholics contributed to a “growing grassroots rebellion against taxation,” to “the erosion of support for the state,” and to “the challenge to liberalism” that reconfigured American politics through the 1960s and 70s.[1] I read Sugrue’s observation as a challenge and opportunity to bring together my long-standing interest in how Catholics have shaped their American identity with coursework in urban history I undertook as a doctoral student at Columbia University with the great historian of suburbanization, Kenneth Jackson.

2.  What did you come to the Notre Dame Archives to find? Did you end up making any valuable discoveries you didn’t anticipate? 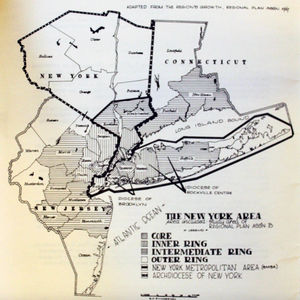 Map from Philip Murnion, et al., The Archdiocese of New York: Prospects and Recommendations for the Future (New York, March 1968)

I specifically came to Notre Dame to search the archives of the Christian Family Movement. From the 1940s through the 1970s, the CFM aimed to assist married couples in properly understanding family, community, and parish life, and deepen member couples’ commitment to involvement in their parish and community. In the archives I was able to find numerous CFM handbooks used for group discussion, lectures from CFM annual conventions, and articles from the CFM newsletter, Act. Additionally, thanks to wonderful assistance from the archivists at Notre Dame, I will be able to listen to digitized recordings of oral interviews that were conducted with CFM members in the 1980s. These materials make clear the evolving ways in which Catholics understood the parish, especially in light of the liturgical movement and demographic change.  I was also pleased to uncover more valuable material than I had originally expected in the papers of Fr. Philip Murnion, a priest-sociologist who founded the National Pastoral Life Center. His studies of parish life and priesthood, including for the Archdiocese of New York, contain interesting reflections on how suburbanization was re-shaping pastoral planning on the diocesan level.

3. You said that a lot about Catholic suburbanization remains unexamined by historians. Is your research uncovering surprising trends or challenging standard narratives about the period?

One of the most popular tropes about postwar suburban Catholics is that they so valued Catholic education, and were having so many children, that newly established parishes usually built a parochial school first, and celebrated Sunday Mass in the gymnasium or cafeteria until the parish could afford to build a church. Of course, this pattern did in fact play itself out in many suburban parishes, but it was far from universally true, and the narrative may actually obscure as much about suburban Catholicism as it illuminates.

St. Bernard’s Parish in Long Island’s famed Levittown development, for example, helps provide a necessary corrective. After the parish was founded in 1948 a church was built and sisters were recruited to teach religious education classes in parishioners’ homes. Not until 1961, however, was a parish school opened, and only after the parish had a contentious debate about the necessity and value of Catholic education. Parishioners questioned the advisability of spending so much money on building a school when it could only accommodate a small percentage of the parish’s children, when parishioners’ heavy tax burden was simultaneously funding new public schools, and when the ecumenical spirit of Cold War religiosity – and, in time, the Second Vatican Council – engendered suspicion of Catholic separatism.

Getting beyond the standard narrative of the postwar building boom and recovering these debates provides crucial insight into broader uncertainties in American Catholicism occasioned by the collapse of the Catholic ghetto. These include issues of assimilation to mainstream American culture, inculcating the faith in the next generation, the quality of Catholic schools, and the relationship between church and state.  These are all issues I hope to explore more deeply in the dissertation.

4. You mentioned Tom Sugrue’s argument that suburban Catholics contributed to a “growing grassroots rebellion against taxation.” Could you say more about the role you’re finding taxation played in Catholic suburbanization and its politics?

As I mentioned, suburban Catholics found themselves under the weight of home mortgages, the increasing taxes levied by suburban municipalities that were massively expanding public services, and, in some cases, the tuition bills for sending their children to the parish school. In response, Catholic lobbying groups in New York and around the nation intensified their efforts to obtain state aid for parochial schools, hoping that such financial relief would lower tuitions, increase enrollments, and thus ensure the survival of Catholic schools. Political candidates from both parties also appealed to Catholic voters by supporting state aid for parochial schools.

In 1967, delegates to the New York State constitutional convention proposed repealing the state’s 1894 “Blaine Amendment” which had prohibited state aid to church-related schools. This was a considerable victory for Catholic lobbying efforts in Albany. However, when the proposed constitution was put before the state’s electorate, it was voted down even in heavily Catholic areas of suburban Nassau County.

At the time, political commentators concluded that Catholic voters must have feared that the new constitution would lead to increased financial obligations for the state and thus to higher taxes. I am still sorting out precisely what this result, when combined with other data such as enrollment figures in suburban parish schools, has to tell us about Catholic assimilation, the laity’s support for parochial schools, and Catholic voters’ understanding of church-state relations. But the 1967 referendum strongly suggests that suburban Catholic voters placed a higher priority on minimizing their tax burden than on preserving a Catholic subculture through the support of Catholic schools.

I think that this episode, and the larger story of Catholic suburbanization, can help us fill out the historiography of postwar conservatism and adjudicate historiographical debates about white backlash and the disintegration of New Deal liberalism. Catholics are often oddly omitted from the story of postwar conservatism. Historians who do try to explain the political realignment of American Catholicism, and the Catholic contribution to the Reagan Revolution, usually focus on the politics of race relations, law-and-order, and especially abortion. I hope to show that postwar political realignment can’t be fully understood without reference to the cultural, economic, and political changes wrought by the suburbanization of Catholic voters throughout the 1950s and 60s.

5. What other archives will you be visiting?

In addition to my research in the archives at Notre Dame, I have already spent several months researching in the archives of the Diocese of Rockville Centre. I had the opportunity to examine numerous diocesan and parish collections as well as twenty years of the diocesan newspaper, The Long Island Catholic. In the coming months, I will be working in the archives of the Diocese of Brooklyn and the Archdiocese of New York, in the U.S. Bishops’ Conference papers at The Catholic University of America, and in select collections of women’s religious orders which were active in the suburbs I am studying. Finally, and perhaps most importantly, I hope to visit several suburban parishes to explore their collections of bulletins, newspapers, and other documents.