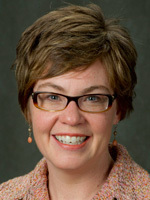 I am delighted to inform visitors to our website that Professor Kathleen Cummings will become director of the Cushwa Center effective this summer.

Please find copied below the official announcement of her appointment from John McGreevy, dean of Notre Dame’s College of Arts and Letters. As most of you know, Kathleen, Paula Brach, and I have worked together for both of my terms as Cushwa director. I could not have asked for better colleagues. But I think my deepest debt of gratitude to Kathy is that I leave the Center I esteem highly to an accomplished and visionary successor.

Please join me in congratulating Kathy, and in supporting her in the projects and initiatives with which she will enhance the Center’s mission in the coming years. I also want to take this opportunity to express my gratitude to all the Cushwa Center’s friends and supporters. My decade as Cushwa director were wonderful years of collegiality and learning from the many scholars associated with the Center. I thank you all and wish you all the best in your future work and participation in the mission of the Cushwa Center.

I am pleased to announce that Kathleen Sprows Cummings, Associate Professor of American Studies, has accepted a five-year term as Director of the Cushwa Center for the Study of American Catholicism, effective July 1, 2012. As many of you know, she is one of the country’s most accomplished scholars of American Catholicism, notably as the author of New Women of the Old Faith: Gender and American Catholic Identity in the Progressive Era (University of North Carolina Press, 2009), a path breaking study of gender and Catholicism. Her current project, for which she won a National Endowment of the Humanities fellowship in 2010, is on saints and saint-making, and is an attempt, in her words, to bridge the “divide between institutional and popular religious history.” She is an innovative (and popular) teacher, with especially well regarded courses on the history of American Catholicism.

Kathy has been Associate Director of the Cushwa Center, the country’s premier Center for research on American Catholicism, since 2001. The Center’s director during that time, Professor of Theology Tim Matovina, is stepping down with the gratitude of the College and his colleagues on the Cushwa board. Tim has been a superb leader for the Center and has advanced its mission in multiple ways, from more fully integrating Latino/a Catholicism into the research profile of the Center to a series of innovative projects on global Catholicism, including an ongoing project—conducted by a team of international scholars—aiming to write the history of the Second Vatican Council as experienced in fifteen different dioceses around the world.

The Cushwa Center’s history—beginning with its founder Jay Dolan 1975-1993, its second director Scott Appleby 1994-2002, Tim Matovina 2002-2012, and now Kathy Cummings—is an unusually distinguished one. Please join me in thanking Tim for extending that tradition, and congratulating and welcoming Kathy as she begins her new duties.