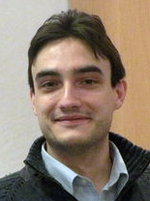 With the support of a Hesburgh Research Travel Grant, Alberto Guasco visited the Notre Dame Archives in June and July 2018 to study the work of Father Theodore M. Hesburgh, C.S.C., in the founding of the Tantur Ecumenical Institute. Guasco is assistant professor of history at Link Campus University in Rome, Italy, and is a frequent host of Uomini e Profeti, an Italian podcast on religion and culture. During 2017–2018, he was an invited professor at the Pontifical Gregorian University in Rome. In late July, Cushwa Center assistant director Shane Ulbrich interviewed Guasco about his research.

SU: You’ve been at Notre Dame for a month this summer to study Father Hesburgh’s role in the founding of the Tantur Ecumenical Institute in Jerusalem. How did you become interested in Tantur’s history? Why is this an important research project in 2018?

AG: Professor Alberto Melloni, director of the Fondazione per le Scienze Religiose Giovanni XXIII (FSCIRE) in Bologna, Italy, suggested Tantur as a research topic a few years ago while I was a research fellow at FSCIRE. I had just concluded my book Cattolici e fascisti, on the relationship between the Holy See and fascism, and was not sure that Tantur would be an interesting subject. By now, though, I have completely changed my opinion. As a Catholic and a church historian, I pursue my research interests—or better, passions—not merely at the intellectual level, but also in service to the Church. In today’s world, where disunity increases daily, what could be more important than the Christian call to unity? This call is at the heart of Tantur’s history. 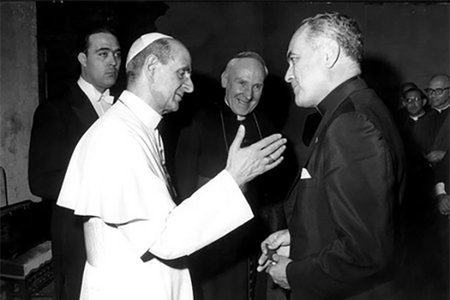 SU: Could you give a brief overview of Tantur’s founding? Who were the different actors involved, what was Father Hesburgh’s role, and what ultimately came of the initiative in those first decades?

AG: The official opening of the Tantur Ecumenical Institute for Advanced Theological Studies in Jerusalem in September 1972 was the fulfillment of an ecumenical vision of Pope Paul VI, which he had had in mind since the time of the Second Vatican Council and his 1964 pilgrimage to the Holy Land. The institute was launched in less than a decade thanks to individuals and institutions working for Christian unity in the 1960s and 70s. In this sense, Tantur and its under-explored history could be a case study in the broader shift of Christian churches from hostile separation to theological dialogue.

That said, the Tantur project developed by way of specific, major milestones: the encounter between Paul VI and non-Catholic observers during Vatican II (1963–1964); his pilgrimage to Israel and Jordan and his meeting with Patriarch Athenagoras (January 1964); his entrusting the Tantur project to Father Hesburgh (April 1964); the involvement of all the world’s “ecumenical forces” (including the Secretariat for Promoting Christian Unity, the World Council of Churches, and theological faculties from across five continents); the efforts to address the material, legal, and juridical problems that Tantur faced in its geopolitical context (1967–1972) after the property shifted from Jordan to Israel with the Six-Day War; the inauguration of the institute (1972); and its initial crises (1973–1978). That early period of crisis was due to the absence of a permanent rector, the lack of an ordinary institutional affiliation, and limited financing. Above all, though, the ecumenical institute suffered from the non-participation of Arab Christians in the institute’s life (since it came to be located in Israel) and the ban by the Greek Orthodox Patriarch of Jerusalem, Benedict I, who forbid Orthodox clergy from taking part.

SU: Tell us about what you've found in the Notre Dame Archives. Has a month been enough time to work through it all?

AG: My month here was just enough. I finished looking through the folders on the very last day I was at Notre Dame, a few hours before the archives closed. This is because I had been working with several related European repositories for the last three years, and many materials were already familiar to me. Indeed, Father Hesburgh’s collection of materials concerning Tantur is very rich. He had many partners—individuals  as well as institutions. The work I had done in the past was essential for orienting myself among the five or six boxes I needed—very well-structured as well as substantial—and not to be overwhelmed by them.

Thus, I found some documents that I already knew and many others that I didn’t, which were essential for getting the full story. As usually happens, some interesting pieces of the puzzle were not in the places they were supposed to be, or where I assumed they would be, so I had to “walk in darkness.” But that’s the charm of working in archives. 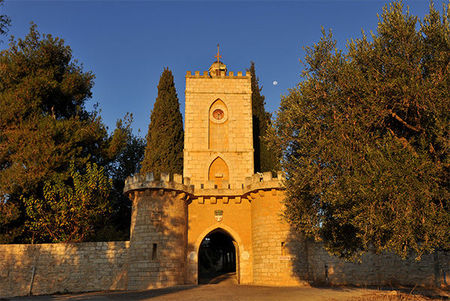 The main gate of the Tantur Ecumenical Institute

SU: Have you read anything in Hesburgh’s correspondence that surprised you?

AG: I find frequent remarks on the triumphs of the Fighting Irish in many of Hesburgh’s letters to his brothers and collaborators. Joking aside, in the historian’s daily work it’s very difficult to discover anything sensational, and certainly that was not my main purpose in this project. That said, I found some particularly interesting documents. One example is Hesburgh’s report concerning his trip to Jerusalem in August 1967, when he needed to renegotiate the project’s terms with the highest Israeli authorities, given their perspective on Tantur. There are also the minutes of his audiences with Pope Paul VI, each one of them crucial for understanding the pope’s thinking as well as the development of the whole project. Then there are his letters with Roman curial figures and congregations, both allies and those unfriendly to the project and to him personally.

SU: Has your understanding of Father Hesburgh changed at all over the course of this research?

AG: It is amazing that, in comparison to other key figures in American Catholicism like Thomas Merton or Dorothy Day, Father Hesburgh is not very widely known. In 1969, The Guardian called him “the most powerful priest in America,” but it is my conviction that he was much more than even that.

I see him not only as the head of the Jerusalem project, or the chief manager of its academic council, or a skilled fundraiser, or even a man closely linked to the political and economic centers of power at that time. Beyond all these, I have discovered a man faithful to the Church, esteemed by the pope and by his collaborators (once, one of them wrote: “were I cardinal I’d vote for you at the next conclave”); a man acting, in his own words, “immediately if not sooner;” a man of wit and of many friendships; in a word, I have seen his warm, human side.

SU: You’ve visited Notre Dame for a month with your family for this project. How has it been conducting summer research at Notre Dame? Has your visit to the United States given you any new perspective, whether about this piece of global history or more generally?

AG: It was a worthwhile experience. On the one hand, I regret I was at Notre Dame off-semester and missed lectures, seminars and other interesting opportunities. On the other hand, in terms of the archival work itself, I found a needed, peaceful oasis this summer.

Moreover, I had time to visit not only Notre Dame’s campus, but also cities like Chicago and New York, and therefore to get to know a country where I had previously only spent three days, in 2010. This sort of “geographical experience” is, I think, essential for historical understanding—it’s the opportunity to be right in the places where historic events took place. This is true both for the history of Tantur, where I was a visiting fellow in 2014, and for the present of American (and non-American) Catholicism.