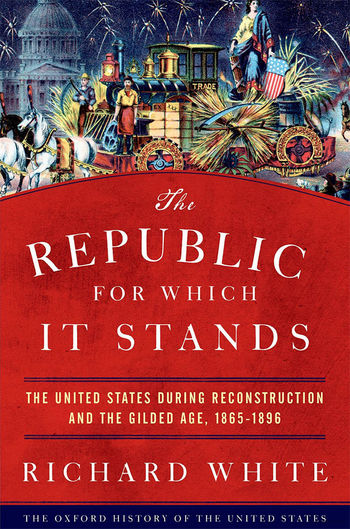 “For a while,” Richard White observes in a bibliographical essay at the end of The Republic for Which It Stands, “the Gilded Age became the flyover country of American history, but at other times it has loomed large” (874). White is correct, and at this particular moment the late 19th century seems to be making a comeback. In October 2017, Ron Chernow (whose biography of Alexander Hamilton was the inspiration for the eponymous musical) released Grant, a 1,074-page biography of the Civil War general who served as president from 1869 to 1877. One month later, Washington Post columnist Dana Milbank criticized the Republican tax plan with the headline, “Welcome to the New Gilded Age.” Milbank never explained the term or referenced the 19th century, evidently assuming that his readers already possessed a stockpile of assumptions about the period from 1865 to 1896. Perhaps Milbank was right, since the economist Paul Krugman has for some years taken to associating our current era with the past age of robber barons and laissez-faire economics.

Whatever they think of the ideas of Chernow, Milbank, and Krugman, American historians will have to reckon with the late 19th century once again thanks to the newest contribution to the Oxford History of the United States series. Richard White’s The Republic for Which It Stands: The United States during Reconstruction and the Gilded Age, 1865–1896 (Oxford University Press, 2017) weighs in at 941 pages, a mammoth book about an era known for its excesses. White’s tome is no excess, however; in this work the author of the Pulitzer-finalist Railroaded: The Transcontinentals and the Making of Modern America (2011) brings his expertise in western history to bear on American history more generally in this fascinating period. This review will evaluate the book as a whole with special attention to White’s treatment of religious topics.

White (Stanford University) uses a birth metaphor to explain the history of the three decades after the Civil War. In his telling, the American nation was a mother with unborn twins. The first twin embodied the hopes and dreams of the Republican Party in 1865—a unified nation based on free labor and equal rights for black and white men. That twin, White says, died in the womb. The other twin represented the world that was actually born; the Gilded Age became a highly stratified class society based on corruption, contract labor, and the suppression of non-whites. Still, “haunted by its sibling” (1), the second twin never entirely lost the nobler, if failed, ambitions of the mid-1860s.

Several metaphors and recurring characters populate White’s narrative. The most central image is that of the “home”—it was evoked to justify everything from the expulsion of Indians to laws policing sexual morality. Native Americans suffered because they had no “proper” homes, while African American men tried to gain equality based on their claims as guardians of homes. Most white women accepted the “home” ideology but others like Elizabeth Cady Stanton thought it oppressed women by denying them individual rights. Like the “home” metaphor, certain figures appear often throughout the book. White’s guide to the age is the novelist William Dean Howells (1837–1920), who embodied many features of the era. We see him initially as a “liberal” (a category more like today’s libertarians, White reminds us), then as a literary realist with socialist leanings. Howells makes sense as a central figure since he came of age during the Civil War and grew to maturity during the subsequent decades.

Yet it is in White’s other recurring characters that religion comes to the fore most clearly. White gives us three Protestant leaders—Henry Ward Beecher, Josiah Strong, and Frances Willard—as representative of certain strains in American cultural life. Beecher, says White, was typically “a flag in the wind” (101)—making him useful for charting the cultural mood. He appears as an invader of the home (because of the adultery allegations against him), as a proponent of liberal theology, as a spokesman for life insurance, and as an opponent of labor strikes. In 1835 Henry’s father Lyman Beecher had made a “plea for the west,” where he warned of Catholic influence on the frontier. A half century later, the Beechers’ fellow Congregationalist Josiah Strong published Our Country, where he expanded on this theme. According to Strong, the United States was threatened by Catholics, Mormons, saloon keepers, and immigrants, to name only a few groups. He merged Christianity, Darwinism, and white supremacy in his prediction of a triumphant Anglo-Saxon race. Strong’s concerns and assumptions, White says, “reflected the Gilded Age sensibilities” (571). A third figure in the Protestant triumvirate is Women’s Christian Temperance Union (WCTU) leader Frances Willard. Willard and the WCTU initially demanded temperance as a way to protect the home, but they also proved adept at using the defense of the home as a justification for expanding women’s political reach. In doing so, they epitomized Gilded Age culture: women pushed for greater rights but made their argument in terms of their different role in society.

While these three stand in for white Protestantism, White also discusses Catholicism at some length. White characterizes the Catholic Church as “the country’s only explicitly conservative institution; it rejected contract freedom, individualism, liberty of conscience, and equality” (315–16). He recounts the disputes over public schools, funding for sectarian education, the Cincinnati Bible War of 1869–1873, President Grant’s 1875 condemnation of Catholicism, and other familiar episodes. De facto religious pluralism between Catholics and Protestants, White argues, emerged not from an ideological desire for tolerance, but from “conflict and stalemate” (321). While experts might want more—“where is Cahenslyism?”—White manages to cover most of the important events in American Catholic history in this period.

White also includes other religious traditions in his narrative. Like Catholics, Jews proved themselves friends of immigrants. This fact should not overshadow the era’s significant intra-Jewish tensions, however. German Jews, who had immigrated decades earlier, looked askance at the flood of Eastern European Jews arriving in the 1880s. Ethnic tensions combined with disputes over Reform Judaism resulted in controversies concerning the extent to which Americanization was desirable. Others stood even further outside the boundaries of the American religious mainstream. Mormons threatened the home with their practice of polygamy. Some Native American groups adopted the Ghost Dance around 1890 in a tragic development that ultimately resulted in the massacre at Wounded Knee. While the vast majority of Americans in this period remained at least nominally religious, voices of unbelief could also be heard. By far the most famous American skeptic was the Republican orator Robert Ingersoll, but White also notes the visibility of a handful of Chicago anarchists who publicly mocked religion.

The Republic for Which It Stands has a myriad of strengths. First is its comprehensiveness, a mark of all of the volumes in this series. White’s background is in western, environmental, and Native American history, but readers will find informed treatments of religion, culture, economics, and high politics in this period as well. Second, the book is a boon since it relies to a large extent on recent literature. Those teaching the U.S. survey can quickly become acquainted with some of the most recent work on the Gilded Age by examining the volume’s footnotes. Relatedly, the 29-page bibliographical essay at the end of the book is itself worth the price of admission. It synthesizes much of the important work on this period and covers nearly every conceivable subtopic. Finally, the image inserts—which contain photographs, paintings, diagrams, sketches, and political cartoons—helpfully reinforce the points made in the text.

The only major criticism I would make of the book is that White provides an unremittingly negative account of the era. To be sure there is much to be negative about: the oppression of Native Americans, the birth of Jim Crow, the growth of monopoly and political corruption, and the violent suppression of labor strikes are just some of the age’s features White rightly condemns. And, to be fair, early on he praises the more egalitarian vision of the Radical Republicans and celebrates their temporary successes during Reconstruction. Still, we must be wary of the dangers of caricature, especially on a scale as large as this. Do we really want to think about the Gilded Age as simply a dark prelude to the happy days of the Progressive Era? One senses there is more to the story than we get in this treatment.

Nevertheless, however one evaluates the period from 1865 to 1896, historians can no longer afford to treat it as “flyover country.” Textbooks, edited collections of documents, and U.S. history survey courses might pause and spend more time in this period. It is easy, to paraphrase White, to jet from Abraham Lincoln to Theodore Roosevelt without touching down in between (2–3). However, such an itinerary misses the culture, politics, and people formed in the intermediate period. We will not really be able to understand the Progressive Era, let alone the rest of the 20th century, without grappling with the challenges, contradictions, and hopes of the Gilded Age. The Republic for Which It Stands allows us to begin doing just that.

Benjamin Wetzel is a postdoctoral research associate with the Cushwa Center.