by Meghan Thomassen
(Note: This story originally ran in The Observer on October 1, 2013.)

It was a full house in the Andrews Auditorium of Geddes Hall on Monday night to hear John Allen Jr., Vatican correspondent for the National Catholic Reporter (NCR), speak on the international Catholic Church and its impact on American Catholics. 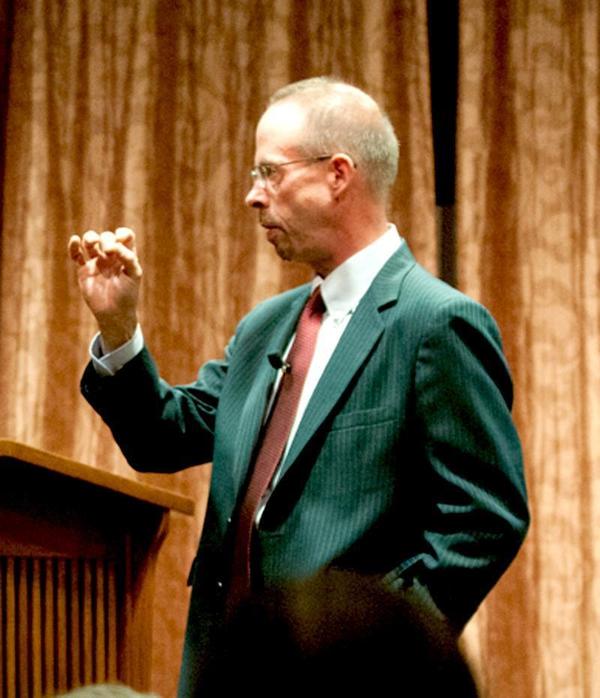 A Vatican analyst for CNN and National Public Radio, Allen titled his talk, “Seeing the Church with Global Eyes: The Rise of a World Church and What It Means for American Catholics.” Allen has reported on the Vatican response to the American sexual abuse crisis, the death of Pope John Paul II and the elections of Pope Emeritus Benedict XVI and Pope Francis.

Allen opened by sharingd a few vignettes about his experience thus far with Francis, who was elected last spring.

“Only four percent of Americans have a negative opinion of the pope, which I find to be nothing short of stunning,” Allen said. “The guy is a force of nature.”

“Francis has taken the world and the Church by storm, and this earthquake is only beginning,” Allen said.

Allen also commented on the changing Catholic demography in thet21st century. He said Catholics are now living in the most sweeping, dramatic and profound transformation in Catholic population in church history.

Allen said since only 70 million baptized Catholics lived in the U.S.  American Catholics only made up six percent of Catholic population.

“That means 94 percent aren’t like us,” he said. “If you want, think about the Catholic Church in the 21st century. You can think globally or you can think dysfunctionally.”

One of the priorities of American Catholic cardinals is renewed evangelization, which Allen paraphrased to mean “the effort of relighting the missionary fires of the Catholic Church.”

“It’s about moving from maintenance to mission, sustaining the institutions to seeing them as subsidiary to the core purpose, which is inviting people into the Church and transforming the world from the inside out,” he said. “So the question is: How do you get there globally?”

While new evangelization efforts in the U.S. have been fighting a metaphorical war against secularism and the contraception mandate, Allen said this is not the case in most other parts of the Catholic world.

“There is a decidedly literal war against religion in many other parts of the world, in which Christians are the primary victims,” he said. “In the U.S., not having religious freedom means you might get sued. In many other global neighborhoods, you might get shot. This rates much higher on the urgency meter.”

Allen said 80 percent of religious persecution and violence is directed toward Christians, making Christians the most persecuted religious group on the planet. Between 2006 and 2011, an average of 100,000 Christians have been killed for motives related to their faith each year.

“That means in the hour that we are here tonight, somewhere in this world, 11 Christians are losing their lives,” he said. “That is what a real threat to religious freedom looks like.”

Allen concluded by paraphrasing Francis when asked his audience about church unity and their reactions to news of Christian persecution last Wednesday.

“When you hear reports, do you pray? Do you take it to heart? Does it not affect you? We have to feel ourselves as members of one local church,” he said. “You have to say, ‘That’s my brother, that’s my sister in the line of fire.’”