A Radical Faith: The Assassination of Sister Maura 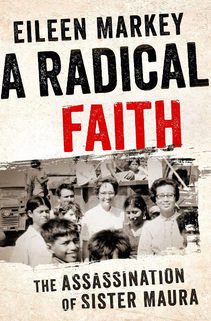 Maura Clarke grew up in the “Irish Rockaways” of New York reading Columba (a missionary magazine about “globe-trotting” Irish priests), attending novenas, participating in feast day processions, and listening to her father’s tales of the Irish Republican Brotherhood. In May 1953, Sister Maura professed her final vows as a Maryknoll missionary sister. Twenty- seven years later, she and three other churchwomen living near San Salvador were found dead in a ditch. In writing A Radical Faith: The Assassination of Sister Maura, investigative journalist Eileen Markey “set out to understand how a beloved daughter from Rockaway, Queens, could end up in that grave” (11).

The University of Notre Dame’s Latin American/ North American Church Concerns (LANACC) hosted a panel discussion on A Radical Faith on April 21, 2017. In her initial remarks, Markey detailed the inspiration for the book. Her research was guided, she said, by her desire to understand how the church of Clarke’s youth became the church of her death. Markey became captivated by the transformational moment in women’s religious orders in the late 1960s and 1970s. She wondered about the transition from the Catholic sisters depicted in The Bells of St. Mary’s to the ones in Dead Man Walking. The book’s narrative arc follows Clarke as she encountered the changing ideas, practices, and beliefs about God and church circulating in the various places she lived and served: from Queens to the Bronx, from Siuna to Managua, and from La Libertad to Santa Ana.

Markey argues that Clarke’s personal faith journey negotiating the meaning of “church”—“what was church” and “where was church”—explains her death. Markey’s compelling transnational story situates one woman’s life within the evolving 20th-century Catholic cultures of the United States, Nicaragua, and El Salvador. She shows how some women’s religious orders, like Maryknoll, whose work had earlier followed the imperial structures of the United States, attempted to disentangle their missions from this collaboration. Sister Maura, like other women religious, struggled to redefine her Catholic identity at a time when what it meant to be a Catholic was not only in flux but also interpreted at the intersection of local and international political movements.

One of the most powerful episodes in the book, and a key turning point in the narrative, comes in Markey’s recreation of a moment when Clarke grabbed a lieutenant of the National Guard outside of Managua, Nicaragua and threw herself on top of his car, protesting the arrest of a teenage boy for his role in demonstrating for a fair price for water. “Oh, sister,” the lieutenant sneered, “Go back to your convent.” Clarke shouted back, “THIS IS MY CONVENT!” (177). In four words, Markey sets the tone for the tumultuous transition that moved Sister Maura even further beyond the familiar convent walls of Ossining, New York, into a truck transporting refugees from Chalatenango to San Salvador (231, 232).

At April’s panel discussion, Cushwa director Kathleen Sprows Cummings, Todd Walatka of Notre Dame’s Department of Theology, and Douglass Cassel of the Law School each offered reflections on the book. Peter Casarella, associate professor of theology and director of LANACC, moderated the conversation. Walatka emphasized that the power of Clarke’s story as Markey tells it comes from early chapters’ rich descriptions of traditional convent life prior to the Second Vatican Council. Only later do readers accompany Clarke as she struggles to grow within the Catholicism of her youth into the faith of solidarity that led to her death. Walatka suggested this book as an effective teaching tool when complemented by a study of official church documents, such as Gaudium et spes. Clarke’s work in Nicaragua, the United States, and El Salvador puts a face on key theological concepts in a post-Vatican II context, including what it means to understand the church as the “People of God,” to be a church “in the world,” and to refuse to be indifferent to injustice. How, Walatka asked, do we embody a mercy that empowers, rather than simply respond to suffering empathetically in the form of aid?

Most writers portray the “four churchwomen” either as martyrs or as a foreign policy problem for the U.S. State Department in its violent anti-communist campaign. Markey instead envisioned her book as an effort to dignify one of these women by contextualizing her death in the story of her life (8). The strengths of Markey’s writing come from this concerted effort to humanize Clarke. Readers learn about her insecurities; feelings of failure to follow God’s will; her fears, especially of her parents dying; and her feelings of romantic love even after 25 years of celibacy. Readers walk the boardwalk in 1940s Queens, New York, see a parish basketball game at St. Anthony of Padua in the postwar Bronx, and visit the mining mission town of Siuna in the mountains of Nicaragua.

By giving us a window into the buildings, towns, people, and work that constituted Clarke’s life, Markey reclaims her as more than a martyr. Yet as Kathleen Sprows Cummings argued in response to Markey’s book, moving beyond the depiction of the four churchwomen as martyrs has lasting consequences for the future of the Catholic Church. Most obviously, as more religious orders stop pursuing the causes for canonization of their foundresses, the legacy of these women might be forever lost to the historical record, further obscuring powerful female role models in the church. Unfortunately, Cummings suggested, by deemphasizing these women’s claim to martyrdom, Catholics might continue to alienate women from a church that until the second half of the 20th century offered more opportunities to women inside its structures than outside of them.

Markey argues in the introduction that while Clarke’s story reveals the “ugliness of the Salvadoran civil war” and is an “outgrowth of the changing Catholic Church,” it is more importantly “the story of a woman trying to be true” (11). Hers “is a political story, but it’s a personal story” (12). Yet as an historian, I envision a much broader intervention for A Radical Faith that will enrich future scholarship. First, as Cummings asked, where does feminism fit into this story about Sister Maura? It is definitely there, Markey admitted. Future scholarship will build upon Markey’s work by studying where and how Catholic women made connections between liberation theology and feminist discourse, and in what forms these connections circulated back to the United States. Unlike the feminism of most white women in the 1970s, Catholic sisters integrated intersectional feminist discourse common within African American and Mexican American circles into their critiques of patriarchy. Scholars might pursue this line of inquiry further by examining the emergent feminist identities of returning missionary sisters.

Alternatively, scholars might ask how ideas about justice articulated in religious circles throughout South and Central America in the 1960s shaped Catholic sisters’ subsequent antipoverty and advocacy efforts in North America. What does this movement of women across the Americas have to do with the inception of organizations dedicated to fostering ties between North and South America? Markey makes a significant contribution by documenting Clarke’s travels around the United States after her return from Nicaragua, spreading awareness among Catholics about the violence of U.S. imperialism in Central America. This marks an important start in analyzing how a transnational movement of religious women throughout the Americas impacted the United States.

Markey also lays the groundwork for a larger story about how Catholics interpreted and enacted Vatican II’s theological ideas in the crucible of the Cold War. Rather than suggesting a transition from an apolitical to political faith, Markey charts how the political allegiances of the U.S. Catholic Church among some of its members changed in this period. Throughout the story, Markey shows how being a “loyal American” and a “good Catholic” intersected in many U.S. Catholics’ everyday lives. Over the course of the book, readers see how the young Maura who sang the national anthem at Stella Maris Academy high school, professing a strong anti-communism, came to advocate on behalf of Marxist revolutionaries in front of “a federal building named for the first Catholic president” (199).

In her conclusion, Markey asks, “Was it religious? Was it political? Is there a difference?” Her answer is that “For Maura it was personal,” suggesting that this faith journey was uniquely Clarke’s (262). Yet Sister Maura, though exceptional by her death, was one of about 1,600 religious women who travelled to South America to start a mission in this same period. If one considers the other women missioned to South and Central America at the same time, what looks similar to Sister Maura’s journey and what looks different? From this perspective, future scholars will reconsider Markey’s astute concluding question. They will untangle the political forces—such as the Alliance for Progress, the spread of the Cuban Revolution, and the failure of Christian Democracy—as well as the religious developments—such as changes in mission theology, the creation of pastoral plans drawn up in the wake of Medellín, and the theology of Paolo Freire—that influenced the most women. They will also take into account women who turned to conservative theological movements when confronted with liberation theology, and women who left religious life altogether. Markey, however, sets out to tell a compelling, “personal” story that will resonate with multiple audiences, and she succeeds. By breathing life into Sister Maura, Markey tells the story of one of many overlooked women who participated in and shaped the liberation theology movement and so lays significant groundwork for forthcoming historical work.

Jillian Plummer is a doctoral candidate in the Department of History at the University of Notre Dame.