Thanking a mentor and colleague 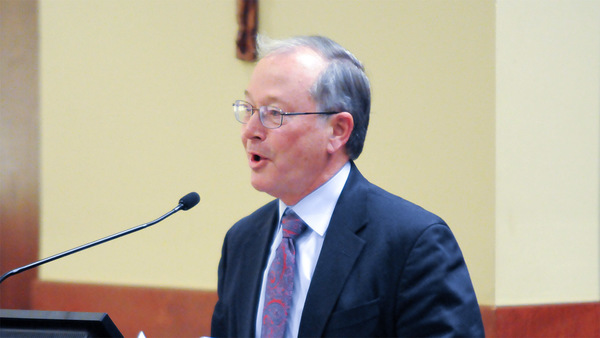 Since Thomas Kselman came to Notre Dame as an assistant professor of history in 1979, he has affected the lives and careers of countless students and colleagues, dozens of whom gathered at a symposium on March 9 to honor his retirement from the University. Tom’s former doctoral students initiated the event, and the Cushwa Center handled the logistics and other practical matters. I am one of those former doctoral students (the second, to be precise). I had reached out to the others in January 2016 to brainstorm what we might do to express the gratitude and affection that we all share for Tom. I also contacted Kathy Cummings, hoping that she could offer some support and ideas in her dual capacity as director of the Cushwa Center and, at the time, vice president of the American Catholic Historical Association, for which Tom had once served as president. Kathy responded just as enthusiastically as the others, and she and the Cushwa staff graciously and expertly took all issues of venue, invitations, travel and accommodations, dinner, and other matters off our shoulders, allowing us to focus on what we wished to say to and about Tom. Remarks during the symposium recognized Tom as “a wonderful mentor of students and faculty” and used these words to describe him: beloved, encouraging, extraordinarily wise, charitable, patient, generous, selfless, loyal, insightful, and animated. 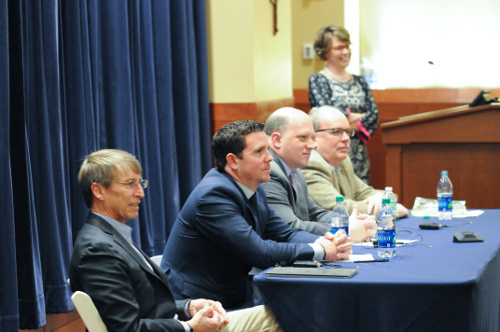 You can view the entire symposium, with full comments from the speakers, audience members, and Tom himself at the Cushwa Center’s YouTube channel.

Schedules being what they are, only four of Tom’s eight doctoral students—James Deming, Andrew Orr, Samy Zaka, and myself—could attend the symposium, although it magically seemed at one point that all might have been able to do so. In fact, the symposium was the second event organized to honor Tom that year: the first occurred in January at the American Historical Association’s Annual Meeting in Denver, where two of Tom’s other former doctoral students, Troy Feay and Sheila Nowinski, joined James (as chair) and myself (as a presenter) on a panel titled “Dimensions of Catholicism in Modern France.” It is an irony attributable to Tom’s intellectual versatility and skills as a mentor that none of his doctoral students produced a dissertation that had much to do with his own research—aside from region and chronological period— but this was an occasion when we three panelists did manage to link our research more closely to Tom’s. Ray Jonas, professor of history at the University of Washington and longtime friend of Tom, served as the session’s commentator and offered a memorable homage when he recalled that after reading Tom’s first book, Miracles and Prophecies in Nineteenth-Century France (Rutgers, 1983), he thought that it was the kind of book he wished he had written. I have heard Tom repeat several times a comment made by Frédéric Gugelot, an historian from the University of Reims who attended the session. On account of the presentations and the gesture in his honor, he said to Tom, “You must be very proud.” I mention this exchange because Tom would repeat it in a manner more paternal than professional. It also captures the way in which Tom sought to establish a truly personal connection with students and colleagues.

Appreciations of that aspect of Tom’s relationships were regularly repeated during the presentations and audience remarks at the March symposium. I was at first a little stunned by Samy’s admission that he considers Tom “to be like a second father,” but many of us can say nearly the same. Tom and his wife Claudia welcomed former students like myself as extended members of their family, with a sense of hospitality that has continued to this day. We know their children Dan, Joe, and Julie and have celebrated as they’ve all made their own ways in life —as we learn every year in the holiday letter we receive. They know our families, too, and never fail to ask about them. James and his wife vacationed in France with the Kselmans. I have even mowed their lawn. Every one of us has bent Tom’s and Claudia’s ears over the years seeking advice for professional and personal challenges and have received sympathy, encouragement, food, wine, and more in return. When Tom referred to his students and colleagues as “family” in his remarks at the symposium it was the first time that I recall him saying it explicitly, but it has been evident to us for years.

Tom’s humane sensibilities show through in his scholarship, too. In preparing my remarks on re-reading Tom’s second book, Death and the Afterlife in Modern France (Princeton, 1993), I was most struck by the empathy Tom offers when telling the stories of those who do not share his beliefs. That brought me to a personal story of my own that helped me to understand what Tom had long understood already. Andrew summarized Tom’s historical approach as “an approach that takes real people seriously as members of big institutions.” Anecdotes told by members of the audience and in remarks over dinner confirmed that this is an approach that Tom has taken in his relationships with colleagues and students, an approach that is perhaps more an instinct—an extension of Tom’s personality—than a professional methodology. 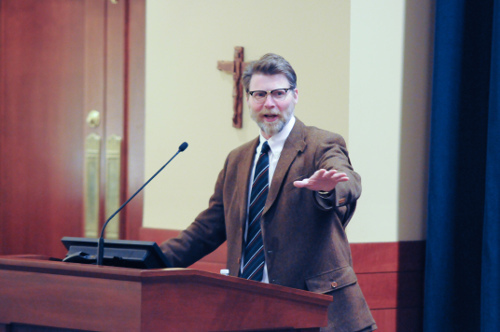 Patrick Griffin, former chair of the Department of History, relayed that after a particularly difficult faculty meeting a colleague recently asked him, by way of commiseration: “What are we going to do next year without Tom Kselman?” Fortunately, most won’t have to do without Tom for a while yet (although I doubt he’ll make any further appearances at faculty meetings). Yale University Press will publish his new book, Conscience and Conversion: Religious Liberty in Post-Revolutionary France, later this year; he has some other projects to complete and one or two others he might undertake; and he may even teach a class now and then. So, it’s quite possible that despite retirement, the first hand up during the Q&A period of a future Cushwa Center event could very well be Tom Kselman’s.