The Cursillo Movement in America:
Catholics, Protestants, and Fourth-Day Spirituality 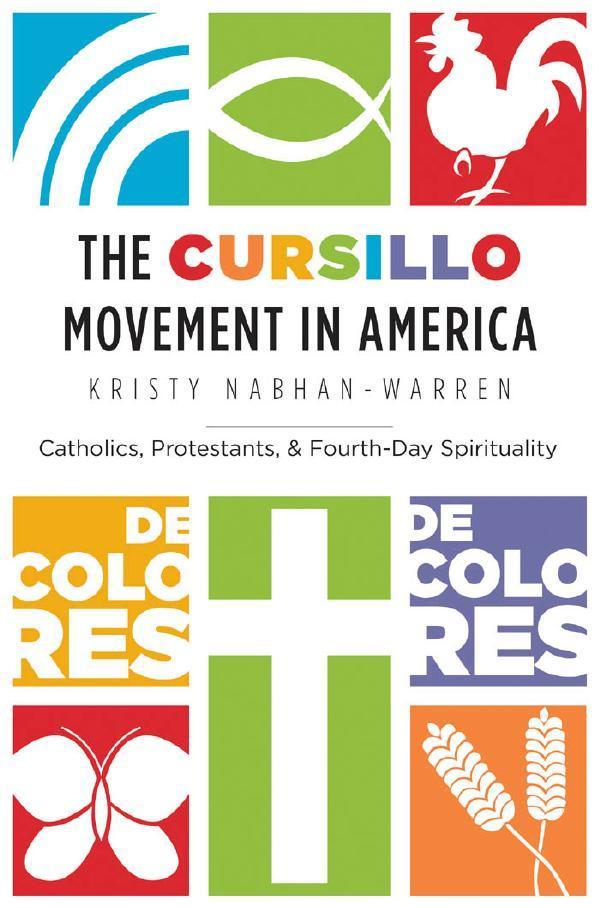 Seventy years ago Eduardo Bonnín Aguilo, a young Catholic layman and Spanish military veteran, welcomed 14 young men to a seaside chalet on the Mediterranean island of Mallorca. Bonnín’s passion was helping people develop their spiritual lives, and he wanted these men to have the time and space to deepen their relationship with God. They spent three days in retreat, listening to presentations, discussing spiritual issues, praying, and, unbeknownst to them, ushering in a movement that would influence the development of Christian spirituality around the globe.

In The Cursillo Movement in America: Catholics, Protestants, and Fourth-Day Spirituality, Kristy Nabhan-Warren traces the movement of Cursillo de Cristiandad, the “short course in Christianity,” from Mallorca to the United States, where it took root in the late 1950s and blossomed in remarkable ways. This ethnographically informed history, the first book-length scholarly treatment of Cursillo, introduces readers to a wide cast of characters, conflicts, and confluences that have shaped this particular program as well as the ensuing worldwide “Fourth Day movement.”

Cursillo is a three-day, single-sex, diocesan-based retreat for lay Catholics that focuses on individual spiritual renewal and the living Christ. Over the course of a weekend, clergy and lay Catholics present 15 short talks—called rollos, the original Spanish term—on topics such as grace, piety, and the sacraments. Through discussion and prayer, participants consider how to grow closer to God and live out their faith on the “Fourth Day”—the term that cursillistas use to refer to the rest of one’s life after this emotional, heart-centered weekend.

The first Cursillo outside Spain was held in Waco, Texas, in 1957, by a group of Spanish-speaking Mexican-American men. The retreat grew in popularity, and within three years women began making their own Cursillo retreats. Within four years Cursillo was offered in English. By 1969 similar “weekend experiences” such as Teens Encounter Christ (TEC) and Christ Renews His Parish had launched. By the time Cursillo was celebrating its 20th anniversary in the United States in 1977, it had inspired programs such as the National Episcopal Cursillo Weekend, Tres Dias (nondenominational and ecumenical), The Methodist program Upper Room (later renamed Walk to Emmaus), Lutheran Cursillo (subsequently renamed Via de Cristo), and Kairos Prison Ministry International. By 1981 almost all of the 160 U.S. Catholic dioceses offered Cursillo.

Nabhan-Warren highlights the importance of the Midwest and Southwest regions to the success of Cursillo—two regions that, she writes, are often underrepresented and underappreciated in religious histories of the United States. As the initial place of contact between Mallorquín cursillistas and U.S. Catholics, the Southwest was responsible for kindling a spiritual fire that soon spread throughout the country. Nabhan-Warren argues that the Midwest region was just as influential. It was in the Diocese of Peoria in particular, but the Midwest in general, she writes, where we see “the greatest level of cooperation and reciprocity between Roman Catholics and mainline Protestants in the 1960s, 1970s, and 1980s…. The history of the U.S. Cursillo movement and the importance of the Midwest to U.S. and global Cursillo history should prompt scholars of U.S. Catholicism and Protestantism to look more closely at regionalism as a way to understand how religious movements take root and spread” (18). (She captures the flavor of the Midwest in a particular way by describing the early morning breakfast ultreyas, or reunion meetings that cursillistas attend after their retreat weekend, at Cracker Barrel restaurants around the region.)

The first three chapters cover the early years of Cursillo in Spain and the United States, as well as the origins, development of, and connections between four Protestant offshoots: Tres Dias, Walk to Emmaus, Via de Cristo, and the National Episcopal Cursillo (13). Chapters 4, 5, and 7 recall the beginnings of the several similar “weekend experiences”:  Teens Encounter Christ, Christ Renews His Parish, and Great Banquet. Chapter 6 provides an in-depth ethnographic study of Kairos Prison Ministry International through the lens of a retreat given at the Rockville Correctional Facility in Southern Indiana, where Nabhan-Warren attended a Kairos weekend for women inmates in 2010.

The interdisciplinary approach that Nabhan-Warren employs works well. She conducted more than 200 interviews of cursillistas and participants in other Fourth-Day programs from various locations and time periods, and the variety of these interviews illustrates the breath and depth of the movement. Her historical scholarship complements the interview material. In particular, in Chapter 1, the author outlines the political and social climate in Mallorca in the 1940s, which helps to situate Cursillo and provide rationale for Bonnín’s desires and goals for his first retreat weekend. Bonnín, who remained active in the Cursillo movement until his death in 2008, came of age and developed his spirituality in the wake of the Spanish Civil War. He participated in Catholic Action, the Spanish version of which integrated a nationalist, fascist ideology with Catholic identity. Catholic Action held its own cursillos, ones that emphasized discipline and patriotism in addition to God’s grace (33).

It was his dissatisfaction with these experiences that motivated Bonnín to develop his own retreat. Nabhan-Warren tells how Bonnín’s Cursillo encouraged participants to “spread the ideals of Christ in a warm, sincere, friendly and festive atmosphere” (39). Through their own individual spiritual renewal, Bonnín asked participants to “bring about a transformation to their immediate environments—to transform the culture of fear and violence through love and understanding” (39).

Of particular interest is the relationship between Cursillo and the military. On the one hand, Bonnín’s spirituality was a direct reaction against a “fascist-linked and authoritarian Spanish-Catholic Church [where] pilgrimage took on masculinist and militaristic overtones” (31). Yet the movement’s connection to military personnel helped it to grow rapidly.

Bernardo Vadell and Augustín Palomino, two Spanish air force pilots who were in Waco for military training, introduced Cursillo to the United States. As Nabhan-Warren explains: “The military-friendly state of Texas was fertile ground for the weekend, which emphasized spiritual discipline and a sense of order as much as it honored individual freedom and dignity” (61). Many of the U.S. soldiers and cadets who first encountered Cursillo in Texas were later responsible for introducing the program to new locations when they were transferred elsewhere.

But the military was just one factor in the the successful spread of Cursillo. Equally or more influential were the Spanish-speaking Mexican-American men who attended the first U.S. weekends. Indeed, the organizers of the first weekend had a hunch that this group would respond positively to Cursillo: “They believed the Spanish, masculinist language would appeal to Mexican-descent Tejanos since they had long been victims of ethnocentric discrimination throughout the Southwest, and nowhere more than Texas” (63).

Chapter 4 incorporates material from more than a dozen interviews with cursillistas—male and female, Latino and Anglo, old and young—all of them explaining how their Cursillo experience shaped or transformed their lives. These reflections provide valuable, often intense, first-person insights that make a case for the movement’s influence on U.S. Catholicism. However, in this same chapter Nabhan-Warren also recounts her own Cursillo retreat experience. While attending the retreat was undoubtedly an important part of her research, the decision to include excerpts from her journal, table discussion topics, and activities is more distracting than illuminating. If her interlocutors could have provided this kind of material instead, it would have made for a more consistent feel within this chapter.

While the focus of the book is on the success of the movement, Nabhan-Warren does not neglect the voices of displeased cursillistas. She includes comments from those who found Cursillo “way too boring” (234) and their critiques about the program being inflexible, sexist, too long, or not sufficiently ecumenical (243). Still, their critiques are the minority opinion, and Nabhan-Warren does not indicate whether they have had any impact on how the program has operated.

Part of the challenge of explaining the wide-ranging Fourth Day Movement is covering the many Protestant, Catholic, and nondenominational offshoots, and Nabhan-Warren does this admirably. In chapters 3 and 7 in particular, she describes the cooperation of and clashes between leaders of various Fourth-Day organizations. Much of the cooperation happened within the confines of the Catholic Diocese of Peoria, where Bishop Edward O’Rourke supported and encouraged ecumenical involvement in Cursillo. Many future leaders of other Fourth-Day organizations made their initial Cursillo in the Peoria diocese and worked with clergy and lay leaders from Peoria’s Cursillo to develop their own programs. On the other end of the spectrum, longtime U.S. national secretariat of Cursillo Gerald Hughes frequently sparred with leaders from other Fourth Day organizations. Hughes championed a nonecumenical program, even to the point of threatening legal action against groups using the (copyrighted) Cursillo name for ecumenical or nondenominational retreats.

Gender is not the primary lens for Nabhan-Warren’s work, but she doesn’t overlook the gender dynamic. In particular, she addresses the U.S. custom of not allowing wives to make their own Cursillo until their husbands have gone. She reveals through interviews and archival work that this was not in fact a requirement in Mallorca, and that Bonnín did not support this custom. It would be interesting to delve into matter this further, to find out how and why this tradition originated.

One lingering question that deserves future study is how Cursillo fit into the larger cultural attraction toward spirituality in the mid- to late-20th century United States. How did Cursillo, with its denominational boundaries and its Protestant, Catholic, and nondenominational spinoffs, follow the rise of other contemporary parachurch and spiritual movements? Did it overlap at all with the charismatic movement? What, if any, response did it have to phenomena such as the New Age movement, “spiritual seekers,” or the emergent church? All of these religious movements point to a culture hungry for spiritual engagement, not just an institutional affiliation.

Nabhan-Warren rises to the challenge of explaining the movement without revealing everything about the weekend. Participants will appreciate this, since one must go on one of these weekends in order to truly understand it. But neither does she leave the non-cursillista reader completely in the dark about the preparation, intent, activities, and outcome of these weekend experiences.

The Cursillo Movement in America is an important scholarly contribution, yet just as important is the book’s potential to allow cursillistas and their counterparts in other programs to discover how their individual experiences fit together into a much larger whole and within a broader historical context than they might have initially realized. Instead of simply a post-Vatican II American phenomenon, Cursillo’s true identity, Nabhan-Warren persuasively argues, is “a dynamic, lay-focused strain of Iberian Catholic spirituality that originated on Mallorca [and] has come to impact hundreds of thousands of U.S. Christian lives since the late 1950s—and millions globally” (254).

By skillfully weaving together many threads—cultural, political, religious, spiritual, and historical—Nabhan-Warren makes an important, comprehensive contribution to understanding the Fourth Day movement and its distinctive brand of Christian spirituality and discipleship.