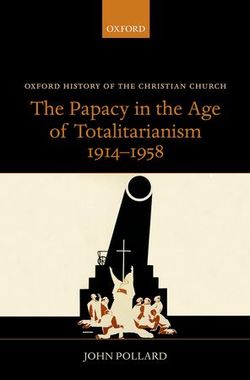 Popes make for interesting subject matter, not only because they are the objects of global fascination but also because their influence on the world stage is both vital and secretive. In the political sphere, the pope and the curia that supports him is bound (at least on paper) to strict neutrality by the Lateran Accords of 1929, though it has often been difficult for popes to remain impartial. This has become even more challenging in the present moment: Celebrity is now part and parcel of the office as cameras follow the pope’s every move and the Twittersphere leaps into action at every pronouncement.

John F. Pollard, a Fellow of Trinity Hall, Cambridge, canvases a period that is bookended by totalitarianism run amuck—spilling over boundaries and affecting large swathes of humanity. The prospect and actuality of total war shaped Vatican statecraft over the course of three papacies: Benedict XV (1914-1922), Pius XI (1922-1939), and Pius XII (1939-1958). For Pollard the papacy was a beacon for peace and restorative justice, but it had to learn its lessons on the way, always seeking to create a space for belligerents to relent even while struggling to remain relevant in the search for tranquility. He has a lucid narrative that undergirds this thesis, covering much territory, and insofar as he hits the high notes of papal diplomacy over four and a half decades, he presents a tour de force of Western history.

Pollard cut his teeth writing on papal diplomacy in his first book, The Vatican and Italian Fascism, 1929-1932 (Cambridge University Press, 1985) and later focused on one of the most under-studied pontiffs in the modern period, Benedict XV, in an acclaimed biography, The Unknown Pope: Benedict XV (1914-1922) and the Pursuit of Peace (Geoffrey Chapman, 1999). His latest volume will add to our understanding of the papacy between the two world wars. Few understand Italian fascism better, and Pollard weaves a synthetic and broad analysis of the rest of Catholic Europe through judicious use of archival material. Some of that has already been unearthed for his previous books, such as the personal details of the life of Giacomo della Chiesa (Benedict XV) drawn from the della Chiesa family archive, but in the present study Pollard delves much more deeply into the documents of the Vatican Secretariat of State’s bureau of Extraordinary Ecclesiastical Affairs. The book’s first half mines these papers brilliantly. Pollard also covers numerous cultural and religious changes—from the cautious embrace of psychoanalysis to the politics of canonizations and the coolness shown to the ecumenical movement.

The author has also waded through mounds of secondary literature, but the chapters related to Pius XII could be developed more through wider consultation of open archive material. For example, Pollard criticizes Americans who assisted in the Vatican or worked on its behalf. The Jesuit Edmund Walsh, whose posting to Soviet Russia to direct famine relief in 1922 comes under particular fire—served up as fodder for Pollard’s assertion that Walsh’s mission now “raises serious doubts about Pius XI as a judge of men” (450). A more careful consideration of Walsh’s papers at Georgetown University, the records of the Catholic Near East Welfare Association in New York, or the secondary literature may have resulted in a more robust and accurate description of an earnest and focused diplomat working under conditions that would have been even more ruinous if the Vatican did not have Walsh on the scene.

Pollard’s remarks on Pius XII’s reign are sympathetic but not fawning, showing a pope scrambling to hold Europe together, housing foreign diplomats in the Vatican during the Second World War—the American chargé d’affaires, Harold Tittmann, Jr., among them—and orchestrating a massive relief effort for Jews and other refugees in Rome and beyond. Pius was a Cold Warrior par excellence, lending the weight of his office in the post-war thumping of Communist party candidates across Italy, but failed to stem Soviet encroachments in Eastern Europe. The pope kept order in his own house, issuing encyclicals meant to curb certain theological tendencies throughout Christendom. Pollard notes some instances where Pius XII was interested in reform, and goes so far as to deny Pope John XXIII credit for the idea of Vatican II. With all of the activity in Rome surrounding the liturgical renewal, Pollard argues, the only thing that prevented Pius from formally calling a Council was his death.

The multi-volume Actes et Documents du Sainte Siège relatif a la Seconde Guerre Mondiale is used with great facility and frequency, but Pollard does not include other important source material that could help round out the picture of international Vatican relations. Notably missing are references to Cardinal Celso Constantini’s wartime diaries (see Bruno Fabio Pighin, ed., The Secrets of a Vatican Cardinal: Celso Constantini’s Wartime Diaries, 1938-1947, trans. Laurence B. Mussio [McGill-Queens University Press, 2014]) and the notebooks of Monsignor Joseph Hurley, the first American to work in the Vatican’s Secretariat of State. Though Pollard does use the United States Foreign Relations, he makes very few references to any of the archival holdings in the United States. I count only two, relating to documents at the National Archives. This inexplicable allergy toward American sources does not serve the project well.

Where does that leave this volume in the historiography of the papacy? The first attempt at bringing a deep analysis of the Vatican’s diplomatic power lies most proximately with Jesuit Father Robert A. Graham’s Vatican Diplomacy: A Study of Church and State on the International Plane (Princeton University Press, 1959). Though it is neither a treatise on the history of papal diplomacy nor a manual for understanding Vatican politesse, Graham sought to initiate an English-readership into the mysterious field of Vatican diplomacy as such, which for much of the last century has meant the establishment of concordats. Legations sent by the Holy See to mitigate conflict or to establish diplomatic relations with states demonstrate papal authority in the civil realm, especially after 1929, when the pope was considered not only the head of a universal church but a leader of an independent nation-state.

More contemporaneous with our day, Pollard’s book joins works such as Luca Castagna’s Un ponte oltre l’oceano: Assetti politici e strategie diplomatiche tra Stati Uniti e Santa Sede nella prima metà del Novecento (1914-1940) (il Molino, 2011) (recently translated as A Bridge Across the Ocean: The United States and the Holy See Between the Two Wars [Catholic University of America Press, 2014]) and Stephen J. C. Andes, The Vatican and Catholic Activism in Mexico and Chile: The Politics of Transnational Catholicism, 1920-1940 (Oxford University Press, 2014). Pollard is primarily, though not exclusively, focused on Europe, so Latin America, Africa, and Asia get short shrift. Consequently, he lessens the significant impact of things like the Cristero Rebellion in Mexico from 1926-1929 or the failure, on the part of the Vatican, to create a Catholic action movement in Mexico. Relations with Catholic countries were hardly ever uniform, and it is sometimes a challenge to see the actual motivations at work. While he does fine work in singling out some of the Vatican’s efforts at making concordats, he does not mention the fact that periodically they were not necessary. For instance, the Partido Conservador, a Chilean political party affiliated with the Church, was already a powerful force in national events, making the Vatican’s quest for a concordat with Chile somewhat superfluous.

There are other problems. There are scores of typographical and grammatical errors in this book, which is very frustrating given its cost and the significance it carries for the Oxford History of the Christian Church series. Frankly, it does not seem as if anyone bothered to proofread the text. The worse sins, however, are in the errata of historical facts—beginning right on page one, where Pollard states that the Second Vatican Council was called in 1961 (it was 1959, in a communication of Pope John XXIII to the cardinals assembled at St. Paul’s Outside-the-Walls in Rome).

Two further examples might also give American readers pause. In his assertion that the Vatican had no representation at the Evian Conference of July 6-15, 1938 (not July 6-12, as Pollard has it), at which some 32 nations came together to discuss the growing humanitarian plight of Germany’s Jews, it is not that the Vatican deliberately absented itself or that it ignored the proceedings. In point of fact, the American Catholic James G. McDonald, the adjutant for Myron Taylor at Evian, worked in concert with Count Enrico Galeazzi, and through him, Cardinal Eugenio Pacelli, the Secretary of State, to keep the Secretariat abreast of the situation. McDonald met personally with Pacelli shortly after the conference concluded and the American briefed him on the Nazis’ “racial primitivism” that posed a threat not only to Europe’s Jews, but to the Church as well. While no one can consult every source, there are two absent from Pollard’s bibliography that might have helped him to reach a more nuanced analysis of the situation: Refugees and Rescue: The Diaries and Papers of James G. McDonald, 1935-1945 edited by Richard Breitman, Barbara McDonald Stewart, and Severin Hochberg (Indiana University Press, 2009) and John F. Morley’s Vatican Diplomacy and the Jews During the Holocaust, 1939-1943 (KTAV, 1980). Although the Evian meeting came to naught, many other avenues were opened by way of the European nunciatures and apostolic delegations around the world—particularly the United States.

Second, Pollard’s suggestion that Clare Booth Luce was viewed with apprehension at the Vatican does not match up with the evidence. Luce was instrumental in arranging for a U.S. tour in 1947 of Alcide de Gaspari, the Italian leader of the Popolari and a political juggernaut among Christian Democrats. The cooperative spirit between the future American Ambassador to Italy (Luce was in that post from 1953-1961) and de Gaspari could not have pleased the Vatican Secretariat of State more, insofar as their mission was all the same: defeat communists. In league with Luce and a fervent supporter of American interests at the Vatican was Bishop Martin O’Connor, rector of the Pontifical North American College. Pollard makes no mention of this whatsoever (Luce’s papers, which are completely by-passed, are readily available at the Library of Congress; O’Connor’s are at the Catholic University of America). Professor Pollard’s work has some blind spots, not least of which is the fact that Luce is one of only a few women mentioned in the entire book—the others being the Blessed Virgin Mary and Mother Pascalina Lehnhart, Eugenio Pacelli’s housekeeper during his time as nuncio to Germany, Secretary of State, and as Pope Pius XII.

Despite its unevenness, this thick tome—with its ample bibliography—should spark more particular research into papal diplomacy.

This review was originally published in the Fall 2015 issue of the American Catholic Studies Newsletter.