Into Africa: A Transnational History of Catholic Medical Missions and Social Change 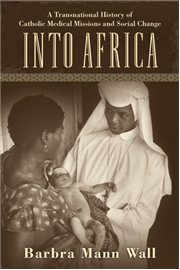 Barbra Mann Wall’s new history of postwar Catholic medical missions in Ghana, Uganda, Nigeria, and Tanzania is a much-needed entry into the story of women religious in the 20th century. Wall, a historian and nurse, has recently been appointed the Thomas Saunders Endowed Professor at the University of Virginia School of Nursing. She has written two previous books, Unlikely Entrepreneurs: Catholic Sisters and the Hospital Marketplace, 1865-1925 (Ohio State University Press, 2005) and American Catholic Hospitals: A Century of Changing Markets and Missions (Rutgers University Press, 2011). Into Africa builds on her expertise in American Catholic health care to tackle the complex transnational intersections of gender, race, theology, medical understanding, and colonial and postcolonial politics that produced the clinics and hospitals whose stories she tells: a story of dramatic expansion, since, as Wall points out, there are currently “more Catholic hospitals in Africa than in North and Central America collectively” (2). Her work focuses on sisters’ role in the expansion of the biomedical model of medicine into Africa; their changing relations with African governments in the postcolonial era; and the sisters’ increasingly self-conscious involvement in the transnational politics of social justice after Vatican II.

European and American Catholic missionaries and their work have been re-evaluated many times in the light of changing understandings of mission and colonization. Early celebrations of heroic and self-sacrificial missionaries gave way to an understanding of them as agents of colonial oppression and cultural imperialism in the name of evangelization. Wall’s first chapter, “Medical Missions in Context,” establishes her work as part of a newer group of studies that does not seek to valorize missionaries, but does seek a more complex account of their motivations and roles, as well as the intended and unintended consequences of their projects. As the book title suggests, she is particularly interested in the transnational character of missionary projects, which sent women across continents to build clinics and hospitals, even as their reports and travel back to their original home bases affected policy there. By expanding the story of medical missions well into the 1980s at the beginning of the AIDS epidemic, Wall is able to give an account of the ways in which decolonization, African independence movements, and developments in both theology and medicine changed congregation-level motivations, and the self-understandings of individual sisters. Other key contexts mentioned by Wall include the self-examination process that came out of Vatican II, the influence of the U.S. Civil Rights Movement, and shifting dynamics between sisters and the male hierarchical structure of both the Catholic Church and medicine. Astonishingly, until 1936 nuns were forbidden by canon law to perform surgery or deliver babies; after this ban was lifted, and especially after the significant increase in educational investment made by religious orders in the 1950s, many sisters became doctors, surgeons, and accredited midwives—credentials that gave them more power in their interactions with priests and bishops.

Although many congregations participated in African missions, Wall relies on the archives of several of the most active: the Medical Mission Sisters and Maryknollers from the U.S., the Medical Missionaries of Mary from Ireland, and the Sisters of the Immaculate Heart of Mary, Mother of Christ, a native Nigerian congregation.

Her first case study deals with the Medical Mission Sisters in Ghana, who arrived in Berekum on the Gold Coast in 1948 to open what became Holy Family Hospital. In keeping with the British colonial policy of “indirect rule,” they did so at the invitation of a local chief, but stayed on under the new independent government of Kwame Nkrumah. The sisters dealt with a variety of issues, funding and staffing paramount among them. The sisters struggled for control with the lay male physicians they recruited until 1957, when a doctor-sister arrived, and throughout the 1950s and 1960s they had both major successes in recruiting, training, and working with local nurses, techs, and others, as well as tensions with staff and student nurses who felt they were not being treated well. They had to modify their ways of working in response to nationalist politics, as Ghanian employees and students asserted themselves and as government policy changed. They also had to negotiate cultural difference with their patients. When, in the name of “order” on the wards, they instituted a policy restricting visiting hours for mothers of admitted children, the number of patients dropped precipitously, and they were eventually forced to modify the policy. As the hospital’s staff “Africanized” and as the sisters themselves became more sensitive to Ghanian culture, the mission shifted from a “medical” to a more inclusive “healing” model that prioritized the care of the oppressed.

Wall’s second case study, of the Maryknollers in Tanzania, highlights the transition from a pre-Vatican II model combining charitable motives with the knowledge that “health care ministry facilitated conversions and the spread of Catholicism” (66) to a model that emphasized unity with “the people of different cultures where ever they worked” and a commitment to the preferential option for the poor (86). In Tanzania the lack of equipment and of reliable transportation (including frequently flooding rivers and broken-down Land Rovers), along with a widely distributed rural population, created massive challenges in health care delivery for the Maryknollers. Like sisters elsewhere in Africa, they relied on local staff both for help negotiating between their own Western biomedical model and village traditions, and for the vital daily work of the clinic and pharmacy. Later, although liberation theology did not develop in the same direction in Africa as it did in Latin America, a number of sisters moved out of mission compounds and into villages, where they not only worked in health care but also helped to grow food and erect buildings. They supported the postcolonial government’s program of “African socialism” during this period, and President Julius Nyerere of Tanzania even spoke at the Maryknoll motherhouse in New York in 1970, calling on Catholics to assist in a social revolution. Although the American sisters were enthusiastic, their numbers declined; by the mid-1970s only 500 of them were in Tanzania, as compared to 2,500 Tanzanian sisters.

Issues of politics and intercultural exchange also dominate the next case study, of the Irish Medical Missionaries of Mary and their activities during the Nigerian civil war of 1967-70. At the time of the war’s outbreak, 165 expatriate Catholic sisters, along with over 400 priests and brothers, worked in Biafra in eastern Nigeria. Wall details how their hospitals, clinics, orphanages, and schools came to serve as “bases for refugees, patients, and wounded soldiers” during the conflict. The Biafran famine, caused by the war’s interference with farming and by Nigerian government roadblocks, became a byword for the consequences of war for local populations. Wall is able to quote from a diary kept by Sister Pauline Dean, M.D., who recorded the daily struggles of trying to provide medical care in places where piles of corpses and starving children were suddenly everyday sights, and where supplies had to be closely guarded so that soldiers wouldn’t confiscate them.

The sisters who stayed during the war came to identify deeply with the Biafrans. But finally, with Irish sisters expelled from their hospitals as the Nigerian government recaptured territory, Wall’s narrative turns to the Nigerian IHM sisters and a few Nigerian MMMs, who were able to take over and maintain many mission projects.

Wall’s work is at its most compelling when it explores the motives and actions of specific sisters from the United States and when it considers the changing dynamics between American and Irish sisters and their native African collaborators, both sisters and lay. She shows how Euro-American Catholic sisters who came with “a one-dimensional notion of a compliant indigenous population” developed extensive collaborative networks with local political powers; with laypeople who trained as Western-style or “biomedical” lab techs, nurses, and doctors; with African sisters; and, most intriguingly, with practitioners of the indigenous healing arts.

Wall astutely points out that both Euro-American Catholic sisters and native Africans believed that biomedicine alone was not enough for healing. Even very early in her history, when sisters were almost exclusively wary of “paganism” and “witchcraft,” they sometimes found themselves alongside these healers; a 1949 Maryknoll diary records an incident with a premature baby, who was first baptized by midwife Sister Catharine Maureen, but then treated by an African woman who beat “some sort of a cooking pot which she held over the baby’s head, and chanted a pagan song to ward off the evil spirits.” Whether it was the baptism or the healing rite, the baby soon began to breathe.

This “pluralistic” healing--“biomedical, spiritual [Catholic], and indigenous”--was part of many Africans’ medical care in mission settings (72). And as Wall points out, while earlier missionaries often saw native populations as deeply Other, as time went on, sisters “identified more with the people with whom they lived and worked, which affected their policy advocacy” (5).

Like most good books, this one left me wanting more. In particular, though Wall frequently acknowledges the extent to which the mission sisters’ work and relationships were shaped by race and power imbalances, she focuses her detailed analysis in other areas. Her narrative suggests that over time, white expatriate sisters in general developed their concept of mission to include social and economic justice. I would have liked to know more about how the missionary sisters were regarded by the Africans with whom they “identified” and how their ideas about race, though modified, continued to be shaped by structural forces of the past and present. How, for example, did the clearly racialized choice to establish separate orders for native Africans continue to rebound into sisters’ understandings of race in the 1970s and 1980s? Questions like this await a closer look, as do issues mentioned in the final chapter but beyond the main scope of Wall’s research: the AIDS epidemic, the ongoing contraception controversy, and the flow of trained African sisters and medical staff away from Africa and to the developed world (whether understood as “reverse mission” or “brain drain.”) However, the clear need for next steps in telling the story of medical missions in Africa does not diminish Wall’s achievement of situating mid-20th-century medical missions within a complex international tapestry.

This review appeared in the Fall 2015 issue of the American Catholic Studies Newsletter.