Thomas Sugrue Looks at Past and Future of American Catholic Historiography

Calling himself a “fellow traveler” of Catholic historians, Sugrue began with a tribute to R. Scott Appleby as a scholar working on the relationship of religion and modernity, a contributor to public dialogue, and a historian of international relations and Catholicism. Sugrue called Appleby a “connector”— on a personal, institutional, and scholarly level. He said Appleby works across boundaries and brings people and ideas together, embodying the spirit of Gaudium et spes in its call for a stronger relationship between Church and world. In tribute to Appleby’s editorial role in the Cushwa Center Studies of Catholicism in Twentieth-Century America series, Sugrue structured his talk as a reflection on the relationship of Catholic history to American history in the 20th century, thinking out loud about what the books in the series should teach American historians and suggesting fruitful avenues for the development of the discipline. 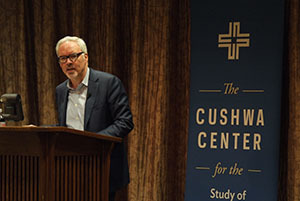 Sugrue’s title, “Beyond the Catholic Ghetto,” refers to a metaphorical construction often used by Catholic historians to suggest a movement of American Catholics during the 20th century from a subculture into the “mainstream” of American society. Although this picture has been complicated considerably by modern historiography, Sugrue preferred to think about the phrase as a description not only of a historical event, but of the development of historical writing, as Catholic historians have left an “internalist” or denominational focus behind in favor of an engagement with larger questions about society and politics. In turn, he called on American historians more generally to leave their own ghettos in turn and look more closely at religion as a dynamic factor in American life.Sugrue praised the range of the series, which encompassed labor history, ethnic and immigration history, the social history of politics, the intellectual and cultural history of Catholicism, the history of Catholic theology, the history of gender, family, and sexuality, and the history of everyday spirituality and devotional practices. In other words, he pointed out, the series participated in the historiographical transformation of the entire discipline, well beyond “Catholic history.”

Sugrue highlighted four themes emerging from the series as a whole that he regards as key for Americans.

First, he argued, the books collectively show the promise of Catholic history to cut across the boundaries and binaries that shape how 20th century American historians teach and write— because Catholics themselves resist easy categorization. Catholic history blurs the boundaries between personal and political; familial, local, and national; bottom up and top down. Sugrue pointed out that Catholic history deals especially well with the so-called “spatial turn” in American history, because Catholicism itself thinks and acts spatially, through the construction and maintenance of sacred territory, which involves thinking through the relationship of intellectual and material boundaries.

A second major theme of the series, Sugrue noted, is the allocation of power and resources across metropolitan space. Catholic history, he claimed, does an especially good job of highlighting the importance of institutions in American life as mediating forces shaping everyday life; it’s not that it ignores the agency of the individual, but it doesn’t overemphasize it as much American historiography of the 20th century does. The familial, the communal, the sociable, play a large role in all these books, making Catholic historians “intuitively social scientists,” thinking about networks and connections between people within society.

A third major theme Sugrue sees in the series is an emphasis on the heterogeneity of “the Catholic experience.” Contrary to a too-frequent tendency of historians to flatten “Catholicism” into a single monolith, Sugrue noted that the series shows the ways in which common threads of Catholicism manifest in different times and places, demonstrating that the tradition is dynamic and malleable. While each of the books shows the tradition getting “reshaped and reordered” in specific social and political contexts, Sugrue pointed out a few instances of particular interest to him. How, he wondered, did a more libertarian rhetoric of individual choice and the market come to be attractive to a segment of American Catholics in the late 20th century, in a way that would have made their parents and grandparents uncomfortable? Catholics, he suggested, have also become more like other Americans over this period, in a growing discomfort with institutional authority, a development explored in another of its aspects in Leslie Woodcock Tentler’s book on American Catholicism and contraception.

Sugrue’s fourth major theme of Catholic history as exemplified in the Cushwa series is its tendency to challenge the well-worn binary left vs. right, liberal vs. conservative framework of American political history. Again, he pointed to an example of interest to him: the relationship of Catholics to socialism during the 20th century. Strong Catholic support for Joseph McCarthy and prayers for the conversion of Russia, Sugrue argued, can obscure, historiographically, forms of Catholic antisocialism not allied with the political right, as studies by Mary Lethart Wingerd and James T. Fisher show. He also noted the strong and somewhat underexplored relationship between Catholics and the Democratic Party, especially the Catholic role in the New Deal coalition, highlighting subsidiarity and the gendered nature of many New Deal provisions as areas where Catholic interests and influence shaped societal and legal settlements.

Following his summary of lessons drawn from the series, Sugrue then turned to themes he hopes Catholic historians will develop, building on these achievements for an “American Catholic history 2.0.”

First, Sugrue called for a better-developed understanding of Catholics in the world. Because the “transnational turn” in American history grew stronger after most of the books in the series were written, Sugrue pointed out, it’s not surprising that most of them don’t move in that direction. He called for more development of transnational histories within Catholic history, pointing out a few examples from recent American historiography that follow economic and intellectual currents back and forth across the oceans. He was particularly intrigued by the possibilities for integrating American Catholicism into political histories of postwar Europe and Latin America, mentioning as potential subjects the role of Catholics in American Cold War activism abroad; in Christian Democratic politics and the reconstruction of European democracy; and the relationship of American Catholics to decidedly undemocratic regimes such as Franco’s Spain or the dictatorships of Latin America.

Second, Sugrue called for a “rich, multidimensional history” of sexuality, including subjects like marriage, masculinity and femininity, and the body, including both theology and everyday practices. He pointed out that such histories would intersect with some of the most fruitful subfields of history today: gender and sexuality, medicine, public health, and law, along with history of science and psychology. He particularly called for a history of Catholics and homosexuality, suggesting that such a history was already “lurking in the shadows” in the background of major books on sexuality in American history, but needs drawing out into the foreground.

Third, Sugrue noted some lacunae in the area of “Catholics and capitalism.” While existing Catholic historiography has covered some of this territory well, particularly in the elucidation of Catholic critiques of capitalism during the labor era, he argued that we know less about the ways in which those teachings were transmitted, “or not transmitted,” to the faithful. He called for histories of how ordinary Catholics came to grips with the transformation of American capitalism during the 20th century, as they went from a predominantly blue-collar, labor-union group to the American religious denomination with the highest average income by the 1970s. How did they manage this transition practically, emotionally, and theologically? He mentioned a history of Catholic business schools as one possibility for investigating this development.

Finally, Sugrue called for new histories of American Catholics after the 1960s. Sugrue pointed out that the Cushwa series, because of when its entries were written, reflects the “center of gravity” for American history in those years: the period from the 1880s up through the mid-20th century. But he argued that the period from the 1970s forward is central to understanding modern America, and has been understudied. He mentioned the deindustrialization and depopulation of Catholic areas of the urban north and efforts to respond to those developments by Catholic activists seeking to save “fragile” Catholic areas. He also mentioned the need for more specific work on how parishes adapted to the Second Vatican Council. Finally, he noted that studies are needed on the Catholic role in dissent (in the anti-war movement especially) and in immigration debates from the 1980s and beyond.

Having pointed to areas where Catholic history could develop, Sugrue then concluded with a return to his opening metaphor. He pointed out that since Catholic history had demonstrably exited its “ghetto,” it was time for American historians to exit theirs and to take account of the work done on approximately 20 to 25 percent of the population. He called on historians to recognize, through studying Catholic history, that “modern America would not have become the place that it is without the role played by Catholics.”

You can watch Thomas J. Sugrue’s Cushwa Center lecture in its entirety at: cushwa.nd.edu/news/66935-video-of-the-2016-cushwa-center-lecture-by-tom-sugrue-now-online.