The focus of my doctoral research is the educational practice of Saint Frances Xavier Cabrini and her Missionary Sisters of the Sacred Heart of Jesus (M.S.C.), 1880–1917. I began this work in 2011, after teaching in London for 30 years, but my study of women religious began over two decades ago. It was prompted by conversations with my sisters Kathleen and Bernadette, also teachers, about our experience of the teaching sisters at St. Francesca Cabrini Primary School in Honor Oak, London. Considered in the light of our professional experience, their approach seemed progressive; their teaching was child-centered and they drew on a variety of learning resources.

Curious about where this method had come from, I contacted our former teachers to see if anything had been written on the subject, and Sister Mary Gough, M.S.C., provided several biographies of Cabrini along with Rose Basile Green’s pamphlet on Cabrini’s philosophy of education. At the time, I was working in one of the schools of the Faithful Companions of Jesus. I read their literature, too, and some on the congregations of two other sisters teaching at the school, Sister Catherine, a Daughter of Charity of St. Vincent de Paul, and Sister Noeline, a Good Shepherd Sister. Noeline had completed a doctorate on her congregation at the Sorbonne some years before, attending the seminars of Claude Langlois. She showed me her copy of Le Catholicisme au Féminin, opening a world of possibilities. 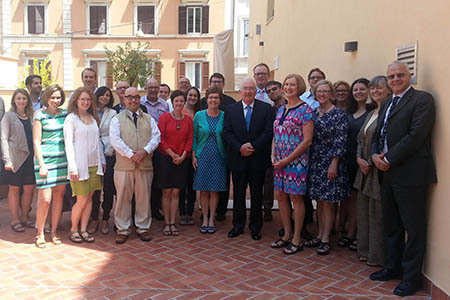 Since retiring from teaching, I’ve taken the opportunity to explore the subject in depth. I spent a year studying at Blackfriars Hall, Oxford, to gain some grounding in theology, which I thought would help me to understand Cabrini’s thinking. Then I began doctoral work at the UCL Institute of Education, which is home to the International Centre for Historical Research in Education (ICHRE) as well as the Centre for Research and Development in Catholic Education. Professor Gary McCulloch, my supervisor, introduced me to the growing body of research on women religious in history of education, commencing with the work of Carmen Mangion, Tom O’Donoghue, Jenny Collins, and Deirdre Raftery.

My dissertation research began with a bang when I received the five volume epistolario containing 2,054 of Cabrini’s letters from Sister Patricia Spillane, then the M.S.C. Superior General. I then faced the challenge of re-learning Italian, which I had not used since my undergraduate studies. Fortunately my knowledge of French, maintained through regular visits to friends in France, helped a great deal. Using the Fluent in Three Months approach developed by

Benny Lewis, I am now able to read fluently in Italian and also read work on Cabrini in Spanish and Portuguese. I was expecting to spend weeks in the archive in Rome making notes from the primary sources. When I visited, however, I discovered that the memorie or house annals have been digitized. After viewing the originals, Sister Giuditta, the archivist, put those relating to my case studies of Rome, New Orleans, and London on a memory stick. The current M.S.C. Superior General, Sister Barbara Staley, Sister Benedict here in London, and many other sisters have encouraged me in my work.

I am really enjoying attending and presenting at conferences. The H-WRBI 2013 conference, “Materializing the Spirit: Spaces, Objects, and Art in the Cultures of Women Religious,” gave me new insights into the significance of embroidery which was part of the “ornamentals” in all M.S.C. schools. The 2014 Cushwa Rome Seminar inspired my 2015 article on the transnational context in which Cabrini mobilized her practice. I have found papers on the work of women religious at conferences organized by the UK History of Education Society, the International Standing Conference on the History of Education (ISCHE), the Association for the Study of Modern Italy (ASMI) and the British Educational Research Association (BERA). It is a great time to be studying women religious.

ICHRE, where I am based, attracts many visiting researchers who are generous with their time. Rebecca Rogers, who also attended the seminars of Claude Langlois, gave me an insight into the historiography of women religious in France. We also discussed how Cabrini set up a foundation there in 1898 when other congregations were preparing to leave. In my study of Cabrini’s letters, I discovered that the M.S.C. were early adopters of the Montessori method. Fabio Pruneri, another ICHRE visiting professor, had recommended the work of Fulvio De Giorgi. His introduction to Montessori’s Dio e il Bambino (God and the Child) explores Montessori’s Catholicism and her links with the Franciscan Missionaries of Mary and Madre Luigina Tincani, foundress of the Dominican Missionarie della Scuola. It helped me to see why Cabrini chose to send M.S.C. sisters to her training school in 1911. An interview with Sister Julia, a former teacher and pupil at Honor Oak, now resident in Madrid, clarified this further.

At the Institute of Education I have also been able to share my findings with scholars researching education informed by the values and beliefs of Islam, Judaism, anarchism, and the Co-operative Movement. I meet many scholars who are not familiar with the work of women religious and ask how Cabrini managed to establish 67 foundations personally in Europe and the Americas over a hundred years ago. Perhaps this is not surprising as it is only this year that we are celebrating the appointment of the first woman director of the Institute, Professor Becky Francis. I am now looking forward to events planned for the centenary of Cabrini’s death in 2017: a conference on educating migrants to mark the occasion in England and the “Too Small a World” conference at Cushwa. Studying women religious is an enjoyable and challenging way to spend retirement and I recommend it to other members of the “silver generation.”