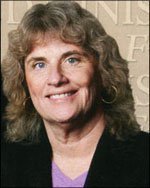 As a child growing up in a small town in the 1950s and 1960s, I received little information about Catholic nuns from my Lutheran family or school. Although a large, majestic Ursuline convent and academy loomed only a few blocks down the hill from my home, it afforded me few views and no insight into the mysterious, black-robed women whom I rarely saw.

Fast forward to graduate school, where I began researching issues of American religious history and gender. Soon after completing my Ph.D. I accepted a position at Avila University and, by coincidence, I stumbled across some books on C.S.J. history in the university library.

This, combined with my increasing conversations with my faculty colleague, Martha Smith, C.S.J., hooked me firmly into the topic, and I soon became fascinated with the subject. I was struck by how closely the activities of Catholic sisters mirrored the activities and institution-building of Protestant women, although nuns’ contributions had never been discussed in my graduate program in American women’s history. Like an early explorer who thought she had discovered a “Lost World,” I was determined to explore this “parallel universe.” Of course, like Columbus, I didn’t discover anything, because many women religious and some secular historians were already there, creating and publishing research, moving it into the mainstream of academic scholarship.

In many ways this was an unlikely choice of research and collaboration on my part.

In May 1990, we began researching, discussing, debating, and teaching each other as we interacted with rich primary sources. Exchanging ideas on scholarship, methodology, religious, and life experiences became a way of life as the project unfolded. Sister Martha and I spent years immersed in research and thousands of hours in conversation, one of us learning to think and talk like a “Catholic” and the other learning to think and talk like a “feminist”—both of us expanding our worldviews and realizing that much was to be gained from listening to the other. We challenged each other’s perceptions on the historical context of gender, religion, and power, modifying each other’s assumptions (if not stereotypes), even as we challenged ourselves and each other to be bold in our writing and analysis. This collaboration allowed us to use our insider-outsider viewpoints, which we believed brought a balanced and unique perspective to our work. In the jargon of late 20th-century discourse, this would be called “feminist collaboration,” or, using the language of the 19th-century convent, our joint project could be described as avoiding “singularity.” In reality, it was probably a little of both.

From the beginning, our goals were shared. We intended to place Catholic sisters within the mainstream of American history and women’s history, and show the sisters’ lives and activities to be as complex, varied, and interesting as their Protestant and secular counterparts.

We intended for this research not only to explore commonalities and differences between these women’s groups, but to further examine the intersection of gender, religion, and power in 19th and early 20th-century America. Catholic nuns struggled with the barriers inherent in gender, religion, class, race, and ethnicity in both the American Catholic culture and the larger American public culture.

I’ve never looked back. Soon nuns began invading my dreams, and for the last 25 years I have relished my association with Catholic sisters both living and dead. I feel I have been honored to be a part of an amazing tradition, and I am grateful.

I’ll finish my thoughts by describing a tradition Sister Martha and I developed during our archival research together. Whatever city we were in, we would relax in the evening by treating ourselves to a nice dinner and wine while discussing our amazing finds in the archives that day. We never stopped the conversations, and we’d rehash intensive, humorous, sad, or surprising finds we had made, attempting to understand the documents we had mined. Whatever sister had been most dynamic in our research that day received a toast when we received our first glass of wine. I often wondered if we had some invisible guests at our table who shared our thoughts, conversations, and our laughter during those wonderful dinners. I hope we did.

This is the first in a new series of columns on this topic by HWR members. If you’re interested in contributing, please contact chwr@chwr.org.

This article was first published in the History of Women Religious section in the Spring 2015 issue of the American Catholic Studies Newsletter.