Around 200 people gathered on December 2, 2016 to hear how a novel on an Irish immigrant to America became an Oscar-nominated film. 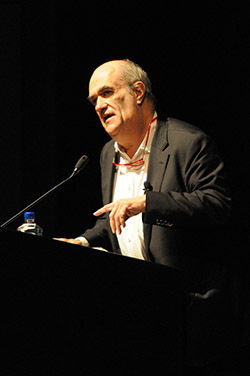 Irish writer Colm Tóibín delivered the Cushwa Center Lecture to a packed house at Notre Dame’s Browning Cinema. Tóibín, the Irene and Sidney B. Silverman Professor of the Humanities at Columbia University, is the author of nine novels and several works of literary criticism.

Tóibín spoke about the genesis of his novel Brooklyn (2009) and its adaptation into an Oscar-nominated film. He explained that while stalled on the manuscript that became his later novel Nora Webster, he discovered that a short passage he had written contained a story worth telling at greater length. He read the selection, in which an older Irish woman tells a story about her daughter who had gone to work in New York and secretly married a young man she had met. Tóibín said he had written this while he was working in the United States for a semester and he felt called to explore what has long been a typical Irish experience of emigration. He wanted to examine the psychological upheaval of no longer knowing where “home” was. He chose to tell a story about Eilis Lacey, a young woman who moves from economically depressed Enniscorthy in County Wexford (also Tóibín’s hometown) to Brooklyn in the 1950s. Eilis gradually adapts to her new life and meets and marries an Italian-American man. After a tragedy suddenly calls her back to Ireland, both the town and Eilis herself are shaken by the ways in which she has changed.

Tóibín also described the process of adapting the novel into a film, which involved assembling a team that both personally understood the emotional stakes of the story and also had some distance from it. While producer Finola Dwyer, director John Crowley, and lead actress Saoirse Ronan all had family or personal experiences of immigration to draw on, Tóibín requested screenwriter Nick Hornby in part because he was neither Irish nor American and would be able to step back and see the story with a more dramatic scope. At the same time, Tóibín stressed that key to the film’s emotional depth was the participation of so many people who had moved back and forth between cultures, or whose parents had immigrated from Ireland. Cast, crew, and novelist shared the experience of dreading a telephone call or a letter from home, saying that someone was ill or had died: “And you can’t be there, and you should be there, and why are you not there?”

Tóibín also attributed the success of the film partly to the filmmakers’ understanding of Irish settings and performers and their commitment to getting the atmosphere of the film right. Crowley, a former theater director in Ireland, was able to fill out his cast with experienced Irish character actors. Meanwhile, Tóibín mentioned three interventions he made himself to ensure the film’s authenticity: correcting the Englishman Hornby’s scripted word “mummy” to the Irish “mammy;” suggesting the Irish sean-nós singer Iarla Ó Lionáird as a featured performer; and sending Crowley to Enniscorthy, where location scenes were ultimately filmed.

Following a showing of the film Brooklyn, Tóibín answered a variety of questions from the audience, beginning with four questions from Notre Dame students who had read Brooklyn together in a course that semester.

Godsee Joy said that her class was especially interested in the contrast between the two “worlds” of Brooklyn and Ireland that Eilis encounters. The students found the presentation of Brooklyn more appealing than Enniscorthy, and wondered whether Tóibín had intended this. Tóibín said he was most interested in the drama of the conflict between the two worlds. Once Eilis left home at all, he said, she no longer knew where home was. He worked with the idea that even decades in the future, she would still not know whether Ireland or the United States was truly home. In this, he wanted to explore the reality of migration: when a person moves, she both gains and loses, and is never sure whether the gain or the loss is dominant. By way of illustration, he mentioned the freedom that people from small towns in Ireland feel when they move to large cities like New York or London, a freedom balanced by the loss of the closeness of a small town like Enniscorthy. He felt that the novel was a bit more ambiguous than the film in this respect; he had tried to make both options so attractive that Eilis would never be sure what choice she should have made.

Katie Laskey asked about the role of religion in the novel, and wondered whether the different religious expectations of Enniscorthy and Brooklyn, or of Irish and Italian-American Catholicism, were factors in Eilis’ experience. Tóibín responded that he was working on Brooklyn at a time when the Catholic Church in Ireland was coming to terms with its sexual abuse crisis. He deliberately avoided making the priests in the novel sinister figures in the light of that scandal. He chose instead to highlight the role that the Church played in keeping immigrant communities together in places as disparate as Australia, England, and the United States—especially because at the time he was seeing the Church play the same role for Polish Catholics immigrating to Ireland.

Allison Hubbard noted that most immigrants to America were single men and asked, first, how having a single woman at the center of the book changed that narrative, and, second, why Tóibín had chosen romance and sex as a means of Eilis’ integration into America. Tóibín responded that it was crucial for the novel that Eilis be a young woman. A young man’s experience would have been centered on the streets, the bars, and sports—a public and social life. But Tóibín wanted to concentrate on “a single psychology,” and this was more easily accomplished with Eilis, whose bedroom is her space and who is “constantly moving inwards.” Since Eilis could not distract herself from her feelings by interacting with other people in public, Tóibín was able to more effectively dramatize her inner conflict.

Chris Kreienkamp wondered if Eilis would have returned to New York if Mrs. Kelly had not intervened. Tóibín responded that Eilis was a drifter, a younger sister who could not make decisions for herself. She drifted into America, and into marriage, at others’ suggestion, and she easily could have drifted along much longer in Ireland, allowing another month to slip by. Tóibín said that he had needed a deus ex machina to wake her up and provoke a crisis that would force her to make a decision.

A number of audience members asked about the absence of a larger political and cultural panorama in both the novel and movie. Tóibín acknowledged that Brooklyn largely ignored the many events taking place during the years in which it was set, most notably the Cold War and civil rights issues. He said that this had largely happened because he did not set out to write a panoramic story about immigration or about America. Instead, he said, he thought he had written a novel about Enniscorthy and the effect that a “Yank” would have when she came back. He was apologetic about presenting it to American publishers because it felt like a story about a single person in the 1950s in Ireland. It was only when he began to offer readings in the United States that he realized that most of his audience were descended from someone who, like Eilis, had come alone through Ellis Island with a suitcase, and missed home. He argued that it was a better book because he had not set out to write about larger themes of immigration and American identity, but instead had told one person’s story.

Finally, Tóibín was asked about the differences between the movie and the book. He noted that the screenplay was mostly faithful to the novel, though its ending was less ambiguous. He felt it was especially interesting that director John Crowley had used many long, silent shots of actress Saoirse Ronan. This formal choice allowed multiple emotions to register on Ronan’s face, which was an intriguing analogue to what novelists do when they journey deep into a character’s mind.