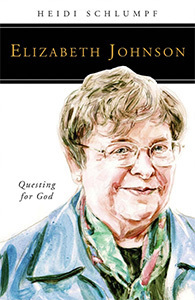 On September 22, 2016, a standing-room-only crowd gathered at Rare Books and Special Collections in the Hesburgh Library to honor Elizabeth Johnson, C.S.J., distinguished professor of theology at Fordham University. This symposium celebrated two recent events: the acquisition of Johnson’s papers by the University of Notre Dame Archives and the publication of Heidi Schlumpf’s biography Elizabeth Johnson: Questing for God (Liturgical Press, 2016). Schlumpf and archivist Kevin Cawley spoke on the panel, as did Johnson herself and Mary Catherine Hilkert, O.P., professor of theology at Notre Dame. We are delighted to share Hilkert's and Johnson's reflections here.

In 1981, Johnson became the first woman to receive her Ph.D. in theology at the Catholic University of America. She started her teaching career at Catholic University before moving to Fordham University. She has served as president of the Catholic Theological Society of America, which awarded her the John Courtney Murray Award in 2004 for distinguished achievement in theology, as well as the 2016 O’Hara Graff Award. Over the years, she has received many other awards, including the Grawemeyer Award in Religion, for groundbreaking work including She Who Is: The Mystery of God in Feminist Theological Discourse (1992) and her recent Ask the Beasts: Darwin and the God of Love (2015). She has also served extensively on national and international commissions, including eight years as a member of the Lutheran-Catholic dialogue.

Mary Catherine Hilkert is a Dominican Sister of Peace and holds a Ph.D. in systematic theology from the Catholic University of America. She specializes in theological anthropology, fundamental theology, and feminist theology and spirituality. She has served as president of the Catholic Theological Society of America and has won numerous awards for her scholarship and teaching. Her most recent book is Speaking with Authority: Catherine of Siena and the Voices of Women Today (2008). She is currently working on Grace Enfleshed: A Sacramental Anthropology. 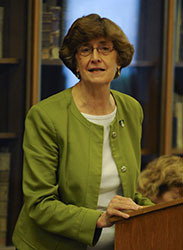 It is such a delight to participate in this event. Beth and I have traveled more than three decades together since she began her doctoral studies and I began my master’s degree work at Catholic University of America one very hot August in Washington, D.C. She has been and is, as Sirach says, a “faithful friend and boon companion” ever since, and the best of theological colleagues.

There are many treasures in these papers—from her birth certificate and baby book to the letters she has exchanged with bishops, theologians, and other intellectuals around the globe. There is also her correspondence with women religious, including the Leadership Conference of Women Religious, who often sought her counsel and honored her with its “Outstanding Leadership Award” in 2014. Countless readers of her work also wrote to her, and each received a personal response.

These archives preserve not only her books, writings, and lectures, but the personal journey—and cost—that lay behind them. You can discover how reading Gaudium et Spes impacted her decision to remain a Sister of St. Joseph and to become a theologian. You can trace the reception history of her books and lectures and awards, none without controversy, but at least one 86-year-old man writing that, before he “goes under the grass,” he wanted to say thank you: “Your book has made a real difference in my life.”

But speaking as a theologian, there are three things to highlight about the importance of this acquisition (first initiated by Tim Matovina when he was director of the Cushwa Center):

The first line of Beth’s dissertation set the stage for her own creative work in the decades to follow—a line taken from the writings of the Lutheran theologian Wolfhart Pannenberg, whose thought she engaged critically in that work: “A crucial, if not the most basic, question of all theology is the question of the right way to speak of God.”1 The mystery of God and all of reality in relation to God, as Thomas Aquinas has said—or in Beth’s language, “the mystery of God and God’s love for all of her beloved creatures, including the Earth and the entire cosmos”—has been at the heart of her life-long quest for the Living God.

That quest has borne fruit for other scholars, ministers, and a wide reading public in the eleven books which she has written or edited—now translated into thirteen languages—as well as her countless articles which have reframed theological discussions about questions as central as: how to speak about God, the meaning of Jesus and salvation (most recently, in the global voices of women), the importance of remembering the saints as “friends of God and prophets” and Mary as “truly our sister,” and the importance of feminist and ecological theology for the survival and flourishing of humankind and the Earth.

The John Courtney Murray Award, which Johnson received from her colleagues in the Catholic Theological Society of America, the oldest and largest professional association of Catholic theologians in the world, signals the level of respect her peers have for her scholarship. This award each year honors one of its members “for a lifetime of distinguished theological achievement.” Johnson was one of only six women who had been recognized in this way at the time that she received the award in 2004. She had also been elected as president of the association for 1995–1996, only the fifth woman to be selected for that leadership role since 1946.

At the heart of all of her theological work is the importance of remembering that theological speech always falls short of expressing the unfathomable mystery of God, a conviction shared by all of the doctors and classic theologians of the Christian Church. At the same time, she has made a unique contribution in our day in highlighting that if women as well as men are created in the image of God, then female language and images drawn from the experiences of women around the globe can also serve as appropriate, though limited, images for God. Her quest to find a more inclusive way to “speak rightly of God” led her “to braid a footbridge between the ledges of classical and feminist Christian wisdom” in her ground-breaking volume, She Who Is: The Mystery of God in Feminist Theological Discourse. (One of her New York colleagues said of the bridge: “You would need the Verrazano!”) The expressed aim of that now-classic work, which received the 1992 Louisville Grawemeyer Award in Religion, an award given annually for a book that contributes to “ideas that improve the world order,” speaks for her broader theological project as well: “My aim in what follows is to speak a good word about the mystery of God recognizable within the contours of Christian faith that will serve the emancipatory praxis of women and men, to the benefit of all creation, both human beings and the earth.”2

Johnson identifies as a feminist theologian not only because of her concern about oppression and gender equity around the world, but also because women and girls are disproportionately those who suffer from poverty, violence, economic injustice, war, and ecological devastation. Yet her human and theological concerns are not limited to questions about women’s survival and flourishing, but rather extend to all creatures and to the Earth itself. Thus, her most recent major constructive work, Ask the Beasts: Darwin and the God of Love, concludes with a call for ecological conversion and for a personal, social and ecological response to the current planetary crisis. That volume too has been widely celebrated by theological colleagues as well as scientists engaged in the dialogue of science and theology, and it was also named one of the “Top 20 books in Science and Religion in 2014” by USA Publishers Weekly, and as one of the “Top 10 books in Spirituality in 2014” by the journal Spirituality and Practice, published in the United Kingdom.

Thus it was no surprise that Johnson chose “Women, Earth, and Creator Spirit” as the topic for her Madeleva Lecture delivered at Saint Mary’s College in 1993, as well as for her presidential address—and charge—to her colleagues at the CTSA in 1996: “Turn to the Heavens and the Earth: Retrieval of the Cosmos in Theology.” More recently a group of her former students and colleagues took up that charge and added their own original insights in the Festschrift in her honor, which they presented to her last June: Turning to the Heavens and the Earth: Theological Reflections on a Cosmological Conversion.

Finally, just a word about the cost of theological integrity. To return to that journey which began at Catholic University of America, it was more than remarkable that as a doctoral student (who received highest honors at every stage), she was asked to teach the master’s level Christology course, which received rave reviews, and to interview for a position on the faculty—unheard-of. She was the first woman to hold a tenure-track position in that department (which granted pontifical degrees), and she received a unanimous vote of affirmation for tenure at all levels of the university, only to have her case “delayed” while a committee of bishops from the Board of Trustees investigated her orthodoxy. She spent the summer after that distressing news in South Africa during the apartheid era, giving lectures in Christology at the invitation of the bishops there and reflecting on the poverty, injustice, and courage she witnessed. Both experiences impacted her deeply. She subsequently received a written commendation for her doctrinal excellence and was granted tenure. However, as she wrote in a poignant letter (now held here in the Archives), she no longer found the department and university which had nurtured her theological vocation, and which she had grown to love, to be a place where “freedom is fostered and where the only constraint upon truth is truth itself” (a citation from the professed aims of the university).

As we are all aware, her tenure case was not the only time when her fidelity as a Catholic theologian has been questioned. More painful, perhaps, was the recent episode (2011–2013) in which the book for which this symposium and Heidi’s biography are named—Quest for the Living God—was publicly misrepresented and serious allegations of doctrinal error were made in a widely-publicized statement of a Committee of the United States Bishops’ Committee on Doctrine. I can’t go into detail here and that’s not the purpose for this symposium, but the Notre Dame Archives now contain all of the correspondence related to that event. Even those who disagree with aspects of her theological thinking have lamented the breakdown in the process agreed upon by bishops and theologians in this country about how to proceed in situations of conflict, beginning with informing the theologian of the concerns or charges which are under investigation and inviting her (or him) to clarify their views and to enter into dialogue about them.

Beth’s written response to the publicly printed criticism of her text (since no dialogue or meeting ever took place) stated clearly that if there were doctrinal errors in her writing, she would welcome learning where that is in the text and would correct it. But she was equally clear in stating: “I am not responsible for what I have not said and I do not think.”

For one whose own theological work—including her feminist and ecological theology—draws so frequently on insights from Thomas Aquinas, and whose definition of theology echoes his own, it must have been particularly heartening to learn that, when Cardinal Walter Kasper was asked about his view of Johnson’s theological work in light of the concerns raised by the Bishops’ Committee, he noted that something similar happened to Thomas Aquinas. We don’t have Aquinas’ archives, but we are fortunate now to have the papers of the foremost Catholic feminist systematic theologian in the United States. To the students and scholars gathered here: Let the research begin!

2. Elizabeth A. Johnson, She Who Is: The Mystery of God in Feminist Theological Discourse (New York: Crossroad, 1992), 8.