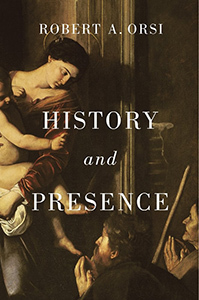 Robert Orsi noted in Between Heaven and Earth, his 2004 essay compilation on the practice of religious studies and scholars’ relationships with their subjects, that “the saints, gods, demons, ancestors, and so on are real in experience and practice, in relationships between heaven and earth, in the circumstances of people’s lives and histories, and in the stories people tell about them. Realness imagined this way may seem too little for some and too much for others” (18). Among those who find such realness “too much” are the majority of scholars in religious studies today. So argues Orsi in his latest book, History and Presence (Harvard University Press, 2016), chosen as the topic of discussion for the fall 2016 Seminar in American Religion.

This was far from Orsi’s first time at the biannual gathering, or even his first time as the featured author. In 1997, the SAR featured his Thank You, St. Jude. Yet as this season’s respondents, Mary Dunn (Saint Louis University) and R. Scott Appleby (Notre Dame), made clear, History and Presence represents a new era in both religious studies and the history of religion, challenging scholars across multiple fields to completely rework their scholarly apparatus. Orsi uses multiple case studies to prove his point and the book ultimately seeks, as he already articulated in Between Heaven and Earth, “to eliminate the comfort of academic distance and to undermine the confidence and authority of the claims, ‘We are not them’ and ‘They are not us’” (7). 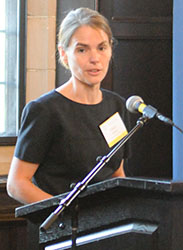 Mary Dunn noted that History and Presence is a challenge to the very foundations of modern academic study of religion, arguing that notions of “the modern”—with assumptions of the absence of the transcendent—comprise a category in itself, emerging alongside “religion” toward the end of the 16th century. The timing was not coincidental. Dunn observes that “modernity,” especially as opposed to “religion,” is essentially a product of the Reformation. This pedigree, which has persisted into the contemporary academy, presents a clear challenge for scholars who wish to take up Orsi’s call to write about presence in all the ways it can be understood. In Dunn’s terms, this means writing about presence without transposing such language into the register of the secular, which defaults to explanations that “It’s never about the gods,” i.e., that there are always alternate explanations, be they social, psychological, cultural, or political. In that framework, investigations that ostensibly begin with religion inevitably proceed to, and end with, politics, sociology, history, and so on. Dunn also posed several bracing questions. Does the book, for example, offer anything more than a Durkheimian read on presence? If experiences of the sacred are understood as what happen when people gather collectively, does Orsi present anything different, given his intense focus on relationships? 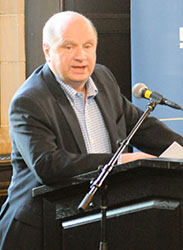 Scott Appleby followed Dunn’s remarks with an extensive commentary on Orsi’s approach as it has developed over the course of his career leading up to History and Presence. He commended the book as Orsi’s “final refusal...to obscure real presence with reductive theorizing or explaining away.” In an observation similar to Dunn’s, Appleby noted that what Orsi has begun with the book is a recognition of a process of quasi-re-enchantment, of describing religious experiences richly without the proverbial “wink and a nod” usually deployed by scholars to distance themselves from their subjects, whose experiences those scholars imply are (or describe explicitly as) impossible.

Appleby commented also on the balance of Orsi’s approach, which even while repudiating the modern academy’s default rejection of presence also seeks to maintain what is useful and generous in theoretical frameworks. Appleby suggested scholars might invert what have become standard epistemological priorities, subordinating their theoretical frameworks to subjects’ acceptance of real presence rather than the reverse. Yet Appleby warned that in the process of welcoming the gods back into the scholarly picture, they cannot take over—in the fashion of salvation history—where established, alternate explanations may be valid. 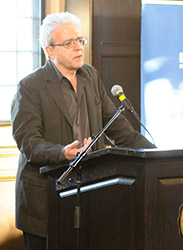 Orsi’s response to Dunn and Appleby extended his overall argument that History and Presence goes beyond a rejoinder to the academy and instead invites broader conversations about presence in history. To Dunn’s question about the book as Durkheim redux, Orsi did not deny the “creative power of togetherness” but instead suggested that those moments of collective religious experience may in fact be a recognition of something pre-existing: a recognition, rather than creation of, the gods. In this way, Orsi said, the book contributes to what could be a healing of the rift between religious studies and theology without letting either dissolve into the other, as Appleby had wondered. Orsi also raised a point familiar to many attendees, namely, that the modern academy has ontologically excluded the world in which he grew up. Whether scholars remain believers in religious traditions after their childhood or no longer consider themselves practitioners, many struggle with the notion that a commitment to scholarly rigor requires a basic repudiation of the faith that shaped their formative years and may continue to guide their lives today. Thus History and Presence offers clear lessons for the academic study of religion as well as for those scholars who feel doubly alienated—once from their discipline as a result of their religious convictions and again from their faith communities because of their ability to turn a critical eye on that faith and whatever notions of presence it carries.

Seminar attendees raised a number of thought-provoking questions and explored several implications of Orsi’s work. Peter Thuesen (Indiana University - Purdue University Indianapolis) drew attention to Rudolph Otto, whose century-old work on “the idea of the holy” might represent a counterargument to the suggestion that absence as a category is essentially a Protestant innovation. Orsi made clear that he did not write History and Presence against Protestantism but instead as an attempt to open up new ways of talking about presence; he mentioned specifically Protestants’ experience of presence within themselves and practices such as Oral Roberts encouraging his television audience to touch their screens in the home while they watched.

Winifred Sullivan (Indiana University Bloomington) said she recently taught History and Presence in a law course. Her students, who came from an exceptionally diverse backgrounds, expressed appreciation for the book’s opening of a conversation on presence. Sullivan noted that although the book offers no definitive answers, doing so is not really Orsi’s goal: simply creating a space to discuss the presence of the gods in a way that does not assume an alternate explanation is a paradigm shift in religious studies. She also observed that in the United States, discussions of religion have been constrained or inflected by law. She highlighted the clear anti-Catholicism of several historic Supreme Court decisions, which are bold indicators of the religious contours of American public opinion. Orsi responded by referring to David Engel and Jaruwan Engel’s book Tort, Custom, and Karma, which examines people’s perceptions of the law (including its relationship with their religious beliefs) in Thailand. In citing a book apparently so far removed from History and Presence, Orsi highlighted the ubiquity of the gods and how their presence must be accounted for even by institutions as powerful as nation-states.

Broaching the most difficult topic of the book, Sandra Yocum (University of Dayton) commended Orsi for his respectful treatment of the survivors of the sex abuse scandal that has rocked the Church for years. Although the book neither provides nor seeks to provide any definitive sense of closure or explanation for the scandal, it does allow victims to “recover a sense of themselves.” Furthermore, as Yocum suggested and Orsi confirmed, the notion of presence—specifically in the person of the priest, who has the power to confect the Eucharist and absolve sin in the sacrament of penance—makes the Catholic experience of sexual abuse uniquely traumatic. Orsi confirmed that there is a clearly ontological dimension to the crisis, which goes beyond victims’ sense of guilt or responsibility and to the very core of their faith. In this way, presence intensifies suffering when those charged with mediating the presence of the divine in Catholic life are the perpetrators.

John McGreevy (Notre Dame) asked how to understand the broader implications of the book given its somewhat episodic, topical construction. How can we begin to make sense of historical occurrences of sexual abuse in the Church, for instance, and why those took place when they did? Orsi acknowledged the inherent tension in Catholicism between the phenomenological and the historical, a tension that demands looking at the longue durée. Further, historical moments such as the entry of post-traumatic stress disorder as a psychological diagnosis and changes to abuse reporting laws draw attention to shifts in understanding sexual abuse. Yet in terms of overarching themes, Orsi noted the importance of not abstracting either abusers or victims, a process that unnecessarily and inappropriately flattens them into types that may be easier to understand but not true to reality.

William Portier (University of Dayton) wondered whether letting the gods back into scholarly conversations pushes Orsi (and religious studies in general) closer to theology. In a follow-up, Mel Piehl (Valparaiso University) asked if Orsi’s desire to bring presence back into discourse could draw in a diversity of godly figures, such as tribal gods, figures from mythology, and so on. Orsi responded to Portier that he fully embraces the need to know theology in order to do religious studies well. In turn, knowing theology allows projects envisioned by History and Presence to go beyond the Christian tradition, including those mentioned by Piehl.

Orsi writes in his most recent book that he is “asking readers not to make the move to absence, at least not immediately, not to surround presence with the safeguard of absence, but instead to withhold from absence the intellectual, ethical, and spiritual prestige modernity gives it, and to approach history and culture with the gods fully present to humans” (8). Just how high and strong those safeguards are remains apparent in the scholarly community. Even the Chronicle of Higher Education, when announcing the book in its weekly review of publications, encapsulated real presence in quotation marks—connoting either an idea specific to the author or so esoteric as to require the emphasis of punctuation to convey its specificity. The point of History and Presence, however, is to argue against either usage. Presence is real, Orsi writes, and not conceding the possibility is holding scholars back.

History and Presence is one of those books that seems to have quietly troubling implications, prompting tentative thoughts of paradigm shifts. A reviewer in the Christian Century noted simply that Orsi “postulates a theory of divine presence to be used by historians of religion”—a scholarly description that misses Orsi’s point, which is precisely that we must disentangle divine presence from so many webs of academic theory and instead take it for what believers mean. When Orsi posits theory in History and Presence, it is only to convince his colleagues across disciplines not to couch presence only in empiricism or sociological frameworks. The thing itself is real.