William B. Kurtz is digital historian and archivist at the John L. Nau III Center for Civil War History at the University of Virginia. His first book, Excommunicated from the Union: How the Civil War Created a Separate Catholic America, was published in 2015 by Fordham University Press. In 2012 Kurtz presented his research at the Cushwa Center's American Catholic Studies Seminar, and he received the Center's 2010 Hibernian Research Award. Heather Grennan Gary recently had a chance to talk with him about his book. 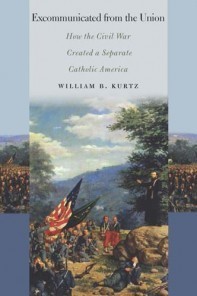 What first got you interested in Catholics and the Civil War? How did you get started?

I have always been interested in the Civil War because my father is a “Civil War buff.” As an undergraduate at Notre Dame, I completed a history honors thesis with former faculty member Dorothy Pratt on the diplomatic history of the war. When I arrived at the University of Virginia to study under Gary W. Gallagher, he convinced me that religion was a growing field of study for 19th century history, and I quickly realized that little had been done on Catholics in the Civil War. In fact, the last book-length study of Catholicism during the Civil War was written in 1945. To be sure, there have since been a number of studies on nuns who served as nurses or the famous Irish Brigade, but the chance to make a major contribution to Civil War and Catholic history by writing my dissertation and my book was too good to pass up.

My central question was to examine how the war shaped the Catholic population, most of which lived in the states outside of the Confederacy. On the whole, I think the war was a missed opportunity to promote assimilation and acceptance of Catholics on their own terms. Angered that the bloodshed of thousands of Catholics did little to eradicate anti-Catholicism, and by strong signs of continued nativism and religious prejudice after the war, many church and lay leaders effectively doubled-down on the creation of a separate Catholic subculture. This subculture of course never totally separated Catholics from other Americans, but it did create a massive system of parochial schools, organizations like the Knights of Columbus, and a large Catholic press designed to safeguard Catholics’ faith from a seemingly hostile outside world.

How did the Civil War impact the Catholic community in the United States at that time? Were things significantly different for Catholics from the beginning of the war to the end of the war? How did the ramifications of the war play out in the U.S. Catholic population, and for how long?

At first Catholics volunteered in large numbers to serve the Union. Many non-Catholics appreciated it when Catholics raised the American flag over their churches and when New York Archbishop John Hughes wrote in favor of the Union and served as an unofficial emissary to Europe to convince Catholics there of the justice of the Union cause.

But as the war dragged on, its human cost became greater, and the Lincoln administration conducted a “harder war” that targeted southern slavery and even civil liberties in the North. Many Catholics, especially conservatives, pulled back from a war that was no longer just about saving the Union. They thought the war was too radical. They enlisted in smaller numbers and some openly opposed the war effort along with other Democrats in the North.

Tragically, their opposition led to the infamous New York Draft Riots of 1863, where crowds composed largely of Irish Catholics attacked Republican and black institutions, charities, and individuals across the city. Republicans such as the influential newspaper editor Horace Greeley saw this and charged Catholics with the old criticism that they weren’t truly loyal to the U.S. because of their religion. Anti-war Catholics reacted by talking briefly about the possibility of a “religious war” and reaffirming the needs to protect Catholics’ religious rights and their faith at all costs.

It’s really not until the 1950s and ’60s when some in the church move away from its emphasis on separate institutions and toward more open engagement with non-Catholic America. Only then do you see this defensive, subculture mentality start to recede in American Catholic life.

Your book includes some interesting demographic statistics—specifically, that while the Catholic population of the U.S. in 1860 was about 10 percent of the national total—about 3.1 million—about 90 percent of those Catholics lived outside of the Confederate states. That suggests that existing sources—especially southern Catholic sources—are pretty scarce. What were some of your most helpful sources, and where did you find them?

Notre Dame is actually an excellent place to study southern Catholic history, because of its archival holdings from the Archdiocese of New Orleans. Jean-Marie Odin, the archbishop of the city at the time, was French as were many of his priests. Louisville, Kentucky, was part of the Archdiocese of Cincinnati at this time, and there is a wonderful collection of letters from Bishop Martin Spalding, a native-born, slave-holding, anti-war bishop. In addition, the Notre Dame Archives holds a microfilm version of the records from the Archdiocese of Baltimore. When you couple those collections with its excellent collection of southern Catholic newspapers, researching at Notre Dame allows one to get a very good feel for the experience of Catholic southerners at this time. You’re right, though, that the collections aren’t generally as good as those from the North.

You include a chapter on priests and nuns in the Army. Do we know how many sister nurses served during the Civil War? How did their contributions change the prevailing narratives about Catholics and the Civil War?

The general number people cite of nuns serving during the war is 620, but researchers at the Daughters of Charity Archives in Emmitsburg, Maryland, believe this number was actually much closer to 700. Nuns were derided before the war through such lurid works as Awful Disclosures of Maria Monk (1836), which depicted them as corrupt and meant to gratify the lust of evil priests. Although this account was debunked before the war, many Americans still believed it, and some nuns complained of physical and verbal abuse whenever they wore their habits outside their convent’s walls. The sister nurses who served went a long way toward getting rid of anti-Catholic prejudice, at least as far as nuns and convents were concerned. They were commended for their work by the U.S. Army’s Surgeon General, William A. Hammond, and later they were invited to take part in an unveiling of a Lincoln memorial built at his gravesite in Springfield, Illinois in 1874. Nuns were much more successful than Catholic soldiers or priests in changing individuals’ opinions of Catholics, if not of their larger religion itself.

Did you uncover any surprises during your research?

One of the under-told stories I discovered was the effort to recruit American Civil War veterans into the Papal Army between 1867-1868. While most historians focus on the American Fenians, a group of Irishmen who hoped to achieve independence for Ireland, the story of the American Papal volunteers is ignored in most general histories of U.S. Catholicism. Although it ultimately came to nothing, there were allegedly hundreds of veterans and young men interested in volunteering under the command of Charles Carroll Tevis, a former Union colonel. That the American bishops were primarily responsible for squashing the idea shows how sensitive the hierarchy was to charges that Catholics were more loyal to the Pope than the United States.

The Nau Center at University of Virginia