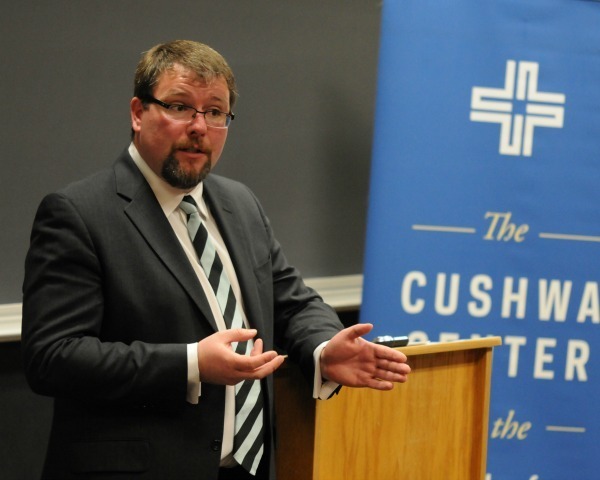 On March 29, Colin Barr presented a lecture on the global networks that connected Irish Catholic missionary sisters in the 19th and early 20th centuries. Barr’s lecture was based on research for his forthcoming book, Ireland’s Empire, which examines how missionaries from Erin fostered a distinctive “Hiberno-Roman” Catholic identity in the English-speaking world. Barr is a senior lecturer in the School of Divinity, History, and Philosophy at the University of Aberdeen in Scotland and past recipient of the Cushwa Center’s Research Travel Grant.

Cushwa Center director Kathleen Sprows Cummings introduced Barr, noting that his lecture highlighted Cushwa’s ongoing support for Irish Studies and the Conference on the History of Women Religious, as well as Notre Dame’s new partnership with the Benedictine Community of Kylemore Abbey in County Galway, Ireland.

Barr began his presentation by outlining his book project and emphasizing the need to move beyond “national silos” when studying the Irish Catholic diaspora. Previous scholarship, he noted, has generally followed a bilateral approach to Catholic history, detailing the Holy See’s relationship with one other country, for instance, or examining the links connecting Irish immigrants living in a particular country with their coreligionists back in Ireland.

This approach, Barr explained, has prevented scholars from seeing the multilateral connections that linked far-flung Irish sisters, priests, and bishops. He discussed how he had initially planned to include a chapter on women religious in Ireland’s Empire, only to realize that he needs to write a book-length study of how these Irish missionaries preserved their shared sense of identity as they lived in community and maintained correspondence with those laboring in Australia, India, Newfoundland, South Africa, the United States, and other outposts of Ireland’s spiritual empire. Sisters played too important of a role in building up “Greater Ireland,” Barr concluded, for them to be confined to only one section of his book.

Missionary sisters’ global correspondence presents opportunities, Barr said, but also poses problems for prospective researchers. Extensive primary source collections exist, but finding and accessing these materials remains difficult. Barr expressed hope that his exploration of Greater Ireland—based on research in 98 archives on four continents—would serve as a “call to action” for scholars to move beyond national frameworks and correct the continuing “underutilization of the archives and stories of religious women.”

Scholars must pay closer attention to missionary sisters because “without such women,” Barr remarked, “Ireland’s spiritual empire would have been entirely impossible.”

Barr discussed the reasons why missionary sisters’ role in building up Greater Ireland has attracted little scholarly attention. Many of the histories written about these sisters feature amateurish or romanticized accounts, he explained, and several of the best works—such as studies of the Sisters of Mercy in Australia and Newfoundland, respectively written by Geraldine Byrne and Kathrine Bellamy—remain largely unknown in scholarly circles. Many archival materials have been lost, few of the sisters’ diaries or letters have been published, and the sisters themselves were taught to be humble and self-effacing.

Further complicating matters, Barr added, is the fact that archival materials pertinent to the history of sisters who worked on one continent may now be housed on a different continent. He emphasized the importance of tracing the multilateral connections of Greater Ireland, even when following these networks lead researchers halfway around the world. For example, the best archive for studying a sisters’ missionary college in County Kilkenny, Ireland, is located in suburban Sydney, Australia.

Barr contextualized the story of Irish missionary sisters by describing Dublin Archbishop (later Cardinal) Paul Cullen’s mid-19th century efforts to infuse traditional Irish Catholic identity with ultramontanism. The combination produced, Barr explained, an “ideologically consistent Hiberno-Roman Catholicism” that called on Catholics to construct their own subculture and isolate themselves from other members of society.

This inward-looking Irish Catholic subculture, which missionaries later exported to settlements across the English-speaking world, required the creation of “infrastructure” needed to keep Catholics separate from their neighbors. Women religious, Barr noted, played an “integral and not particularly subservient” role in this “global Irish ecclesiastical expansion.” While only about 1,000 women religious lived in the whole of Ireland during the 1850s, by 1925 almost 4,400 sisters were laboring in Philadelphia alone, serving in Catholic schools, orphanages, and other social institutions. And while not all of these Philadelphia sisters were of Irish birth or descent, the Irish had still left an indelible mark on the city’s Catholic culture.

Barr next described three avenues for studying missionary sisters’ place within the Irish Catholic diaspora. He first examined how groups of sisters preserved their distinctively Irish identities, then discussed how sisters were recruited for and worked in missionary settings, and finally analyzed the familial and political connections that sustained the Irish “Cullenite network.”

Barr explained how Irishness remained a real and “enduring,” rather than simply nostalgic, part of missionary sisters’ collective identities. Many groups of sisters, he noted, maintained their Hiberno-Roman spirit by recruiting women directly from Ireland well into the 20th century. Non-Irish groups often underwent the “greening” process after arriving in mission territory because they recruited women from Ireland as well as local women who were predominantly of Irish descent. The community practices and precedents established by these Irish sisters and recruits ensured that succeeding generations of sisters continued to think and act along Hibernian lines.

Since Irish sisters remained in high demand across the English-speaking world, bishops were often forced to compete, barter, and “beg” for these missionaries. Barr, who suggested that the “economic model is sometimes a useful one,” likened missionary sisters to a “scarce resource” subject to the laws of supply and demand. High demand meant that sisters could select from a variety of possible missionary postings and extract considerable concessions and favors for their religious community from interested bishops.

Barr explained that sisters were attracted to missionary life by “the promise of hardship and service” and “the alluring prospect of saving souls.” The sisters certainly met with their fair share of hardship: in Mumbai, for instance, one sister wrote of her loneliness amidst the constant rain, while in Newfoundland another sister wrote of temperatures so low that even her socks froze. Barr noted that missionary sisters viewed these challenges as positive, and that many of them had been first drawn to missionary life by reading the heroic accounts found in the Annals of the Propagation of the Faith.

Barr offered a case study of the Assumption Sisters of Grahamstown, Australia, to illustrate the “global nature of the export market for Irish women religious” as well as the nature of their recruitment, labor, and subsequent “greening.” The first group of Assumption Sisters departed from Paris, France, and sailed on the same boat that was carrying Irish Sisters of Mercy—and the French bishop who escorted them—to New Zealand. After these French and Belgian Assumption Sisters disembarked in Australia, they worked in both a fee-based and a free school for girls. The French sisters soon left, but one Belgian sister remained, and she began recruiting women from Ireland as well as from the local Irish immigrant community. By the 1930s the Assumption Sisters in Australia had grown enough in number and prosperity to open a new, highly acclaimed boarding school back in County Down, Ireland.

Ireland’s spiritual empire fostered not only a shared worldview and identity, but also a global Cullenite network of family members and friends. Barr noted that many of Cullen’s nieces and cousins rose to leadership positions within Irish women’s religious communities, including the Sisters of Mercy and the Dominicans. Cullen, along with one of his relatives, Archbishop (later Cardinal) Patrick Moran of Sydney, Australia, deliberately directed sisters to areas of need throughout Greater Ireland. Bishops who were on close terms with Cullen and Moran could often secure the services of Irish missionary sisters, while less well-connected bishops were forced to look beyond Ireland to fill their recruitment needs.

Barr concluded his discussion of Hiberno-Roman identity, missionary labor and recruitment, and the Cullenite network with a case study of St. Brigid’s Missionary College in Callan, County Kilkenny, Ireland.

Irish Sisters of Mercy, including some relatives of Cullen and Moran, founded and supervised the school, which trained young and mostly poor women who aspired to be religious sisters yet who could not afford the dowry required of choir sisters in Ireland. St. Brigid’s provided these students with social mobility, Barr explained, since sponsoring bishops and religious congregations paid students’ dowry fees and recruited them for missionary postings located throughout Greater Ireland.

Barr explained how the school’s records can be cross-referenced with census documents to provide a social history of Greater Ireland. During the first three decades of St. Brigid’s existence, from 1884 to 1914, at least 566 women passed through its doors and out into the Cullenite missionary network. One of the students at St. Brigid’s in 1909, for instance, was James Joyce’s sister, Margaret, who left the school after nine months to travel to New Zealand’s South Island and spend the rest of her life teaching music as a Sister of Mercy.

Students at St. Brigid’s were considered aspirants rather than postulants because they did not take vows or join a particular religious community until after they completed their studies and were recruited for missionary work, Barr continued. Courses at the school generally prepared the prospective sisters for work as teachers or nurses, and religious liturgies at St. Brigid’s helped to instill Hiberno-Roman Catholic sensibilities within them. The school maintained its place in the Irish Catholic diaspora until 1953, when it stopped accepting students for the foreign missions.

Barr ended his lecture by reiterating his “call to action” for researchers. The sisters who founded and oversaw St. Brigid’s enjoyed “relaxed, confident” interactions with priests and bishops, he explained, and they often took “bids” from competing dioceses to see which bishop would agree to the most favorable terms and concessions. But despite the school’s global recruitment network, its role in providing more than a thousand young women with social mobility and religious formation in the Hiberno-Roman tradition, and the agency displayed by its founders, today St. Brigid’s remains largely unknown among scholars. “What else are we missing,” Barr asked, “in terms of understanding how Irish Catholicism everywhere came to be, was established, and endured?”