The 2018 Hibernian Lecture, delivered Friday, September 21 by historian Ruán O’Donnell, traced the productive friendship between America and Ireland from the 19th century to the end of World War I. O’Donnell’s presentation recounted a range of transatlantic connections, ideological affinities, and social networks that created strong bonds between members of the two nations, with important consequences for the 1916 Easter Rising and the political future imagined by the Irish in the wake of World War I.

O’Donnell, senior lecturer at the University of Limerick, is no stranger to the University of Notre Dame. In 2010–2011, he held the Patrick B. O’Donnell Visiting Chair of Irish Studies at Notre Dame’s Keough-Naughton Institute. He has published on a wide range of topics such as prisoner transportation, the social history of Wicklow, the Irish Republican Army, Irish nationalist Robert Emmet, and the 1916 Easter Rising. O’Donnell earned his doctorate at Australian National University, and the wide reach of his lectures and scholarship reflects his global training.

September’s Hibernian Lecture marked the 40th anniversary of the relationship between the Cushwa Center and the Ancient Order of Hibernians. Since 1978 the Cushwa Center has administered a variety of programs, including the Hibernian Research Award, promoting the study of the Irish experience in Ireland and America. Each year, the center invites a distinguished scholar or author to deliver the Hibernian Lecture at Notre Dame on some aspect of the Irish experience.

O’Donnell began by sharing observations about the legacy of Irish immigration in America. The influx of Irish in the 19th century, driven by famine and war, shaped the modern United States in significant ways. Irish laborers dug canals and laid thousands of miles of railroad tracks. They built communities in Boston, New York City, San Francisco, and Cleveland. The Irish joined the ranks of business owners, political bosses, and elected officials in local and national arenas. Importantly, they possessed a flair for forming organizations, clubs, and political fellowships that defined the nation’s civic life. Organizations such as the Irish Friends of Freedom and the Ancient Order of Hibernians in particular would facilitate connections with Ireland.

These American networks offered crucial support to Irish efforts to create a republic and gain home rule from the British in 1916. O’Donnell’s lecture traced a series of material connections. Crowds of thousands would greet the Irish writers and journalists who visited American cities. Irish politicians frequently visited the United States in the 1910s to drum up support for the Irish cause and solicit donations. Union organizers from the Emerald Isle tapped into a network of supporters that stretched from New York City to Chicago. The American Irish were happy to oblige: they contributed financially and sent shipments of arms back home. O’Donnell presented compelling evidence that a wide range of American Irish and their transatlantic connections shaped the trajectory of the 1916 Easter Rising. 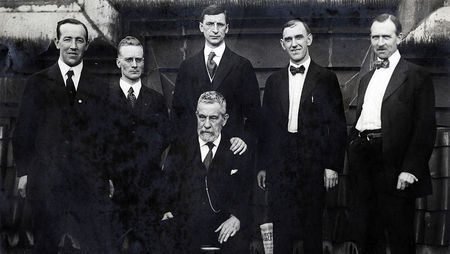 O’Donnell made the case that Ireland and America shared ideological commitments to a moderate form of republicanism that was also in favor of a strong nation-state. The Irish wanted to model their revolution on America’s, rather than the French Revolution of 1789. This was due in part to the important role that religion, particularly Catholicism, played in Irish society. Many Irish priests both in Ireland and America were trained at Maynooth Seminary, just north of Dublin. Religion might be kept at arm’s length from the political system by separation of church and state, but the significant social cachet of Christianity and its embeddedness in everyday life meant it should never be uprooted. American politicians and thinkers helped the visiting Irish to conceive of their revolution as thoroughly republican in nature—but a republicanism in the American style rather than the more extreme French. It required a respect for church authority and it placed checks on popular sovereignty.

World War I marked the highpoint of American influence on the Irish. Woodrow Wilson handed the Irish a major conceptual victory with the notion of self-determination inscribed in the Treaty of Versailles. The Irish in turn offered vigorous support for the League of Nations. Wilson suggested that when the colonial order of the British and French crumbled, national independence projects should be waiting in the wings to organize a series of more ethnically organic states. Irish Republicans believed they had the right to determine their own national destiny, and they appreciated the opportunity offered by Wilson’s Fourteen Points, which provided a political platform for rejecting British rule.When Congress failed to ratify the League of Nations, the promise proved to be an empty letter for many aspiring rebels the world over. It dealt a serious blow to the Irish movement for independence as well. The British waged a brutal war against the Irish and stood their ground.  O’Donnell ultimately sees World War I as a failed opportunity to achieve home rule in a peaceful fashion.

O’Donnell’s 2018 Hibernian Lecture brought to light a series of important connections, both material and intellectual, between America and Ireland. He made the case that American support around the year 1916 was crucial for Irish freedom. Indeed, to understand Irish motivations for freedom and republicanism, the organizational infrastructure and the American landscape of ideas are good places to turn for assistance. As he mentioned throughout his talk, much good research remains to be done.