Presented to Sister Marie Augusta Neal at the Occasion of the Second Conference on the History of Women Religious held at Marymount, Tarrytown College, June 28-July 1, 1992 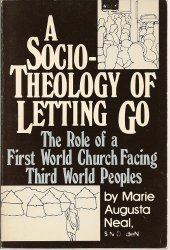 Whereas Sister Marie Augusta Neal, a member of the Sisters of Notre Dame de Namur and Professor of Sociology at Emmanuel College, Boston, has committed herself to the pursuit of religious meaning through sociological analysis; and

Whereas she has imparted to women religious a means of self-understanding and adaptation to contemporary life in the Sisters Survey initiated under the auspices of the Leadership Conference of Women Religious from 1966 to 1972, and concluded with further longitudinal studies in the 1980s; and

Whereas she has contributed to the advancement of women in our society as participant in the Massachusetts Governor’s Commission on the Status of Women from 1964 to 1967; as researcher of women’s roles in society with a Ford Foundation grant in 1975; and as Research Associate in Women’s Studies at Harvard Divinity School in 1982; and

Whereas she has shared her insights into religious sociology and its applications with people of various religious persuasions in various parts of the world by conducting a study of Catholic Schools in South Africa for the Southern Africa Conference of Bishops in 1970; the Selwyn Lectures for the Anglican Church in New Zealand and Australia in 1981; the Sorenson Lectures at Yale Divinity School in 1983; and the H. Paul Douglas Lecture for the Religious Research Association in 1970; and the Furfey Lecture for the Association for the Sociology of Religion in 1981; and

Whereas her professional stature and scholarship have been recognized through visiting professorships at the University of California at Berkeley in 1968 and at the Harvard Divinity School from 1973-1975; through invitations to distinguished lectureships; by the awarding of honorary degrees by the University of Notre Dame, Our Lady of the Elms College, and St. Michael’s College; by the awarding of the Pope John XXIII Award from the College of New Rochelle; and by election to the presidency of the Association for the Sociology of Religion in 1971 and of the Society for the Scientific Study of Religion from 1982 to 1984; and

Whereas her love for and skills in teaching won for her the Distinguished Contribution for Teaching Award given by the American Sociological Association in 1986; and

Whereas she has distilled her thought in publication of five books: Values and Interests in Social Change, 1965; A Sociology of Letting Go, 1977; Catholic Sisters in Transition, 1984; The Just Demands of the Poor, 1987; and From Nuns to Sisters, 1990; as well as by her articles published in Concilium, Sociological Analysis, Social Compass, Journal for the Scientific Study of Religion, Religious Education, and the Review of Religious Research, among others; and

Whereas her life, teaching, research and writing have all been directed toward raising the consciousness of self and others regarding the political, social, and economic injustices that challenge us to a world perspective and energize us to participate in a transformation of society in justice and peace; therefore,

These award citations were presented at the Conference on the History of Women Religious in 1992.