“Why I Study Women Religious” 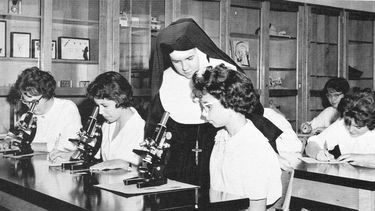 Until recently, the study of women religious was regarded as marginal to the concerns of scholarship. As researchers—many of them members of the CHWR—have pointed out, sisters were often invisible to historians of Catholicism because they were women, and invisible to historians of women because they were Catholic. Yet the hundreds of thousands of women who have dedicated their lives to prayer and service over the course of the last two millennia make for a compelling story.

From spring 2015 to spring 2019, each issue of the American Catholic Studies Newsletter featured short personal essays by scholars of women religious, describing how they came to enter the field and why they continue to feel drawn by it.

Stay updated on CHWR news by subscribing to the Cushwa Center's mailing lists.