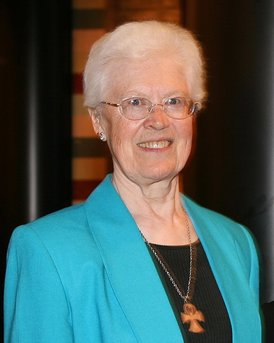 Whereas Karen Kennelly, of the Sisters of St. Joseph of Carondalet, has consistently endeavored to help women reclaim and maintain their identity as makers, writers, and interpreters of history, and

Whereas Karen has admirably modelled the importance of education in women’s search for truth and just action through her presidency of Mount St. Mary’s College, her administrative leadership in various executive positions at the College of St. Catherine and other prestigious academic and civic commissions, and

Whereas Karen has encouraged and modelled women’s collaborative efforts towards effective leadership in her role as province director of her religious community for six years, and

Whereas Karen has shared her creative insights on women’s history by means of public lectures, as editor of such books as American Catholic Women: Historical Experiences, and as writer of many articles in books and periodicals, and

Whereas Karen has successfully raised the consciousness of scholars nationally regarding the importance of the history of women religious, giving rise to new scholarly works on this history, and

Be it resolved that the Conference on the History of Women Religious here assembled hereby present this award to Karen Kennelly in deep appreciation and gratitude for her creative and tireless efforts in calling us to greater collaboration and accountability in recording and telling our stories. We thank you, Karen, not only for what you continue to do, but especially for who you are.

Given the twentieth day of June in the year of our Lord nineteen hundred ninety-five, at the conference, “Beyond Convent Walls: Women Religious in Historical Context,” at Cardinal Stritch College, Milwaukee, Wisconsin.

These award citations were presented at the Conference on the History of Women Religious in 1995.