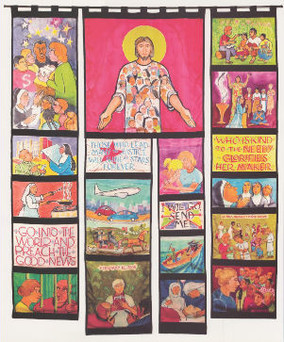 “We Will Go, Send Us,” silk banner created by Thoma Swanson, O.P.

The Conference on the History of Women Religious marked its 20th year during its Seventh Triennial Conference, held June 24–27, 2007, at the University of Notre Dame. Over 200 scholars attended, and News & Notes reported the presence of many laypeople and younger scholars as CHWR broadened its appeal. Prudence Moylan chaired the program committee, and the theme “Local Cultures/Global Church: Challenge and Mission in the History of Women Religious” responded to a growing scholarly interest in transnational themes.

Angelyn Dries, O.S.F., Danforth Chair in the Humanities, St. Louis University, gave a keynote on “Mission and World Christianity,” and Margaret Eletta Guider, O.S.F., Associate Professor of Missiology, Weston Jesuit School of Theology, gave a keynote on “Mission in the Americas: The Challenge of Reciprocity.” In addition to these major talks and papers given at 33 concurrent sessions and workshops, the conference featured an exhibit of Corita Kent’s serigraphs at the Snite Museum of Art and a performance by the NGoma Group, “A History of African-American Life in Song.” Finally, Thoma Swanson, O.P., created a colorful hand-painted silk wall hanging, “We Will Go, Send Us” for the conference.

The business meeting discussed concerns about the ongoing viability of the organization, and after the conference the newsletter announced that the coordinating committee would meet in 2008 to discuss both the organization’s success, and its structural concerns.

As a subscriber from Australia, Rosa MacGinley, recently commented, “HWR’s work is paying off in the continuing stream of well researched and thoughtful studies in this field of women’s history.”

But, Kennelly asked, “Is it time to consider alternatives to HWR now that its original purposes have been at least partially achieved, or are there unique services the organization can still offer?”